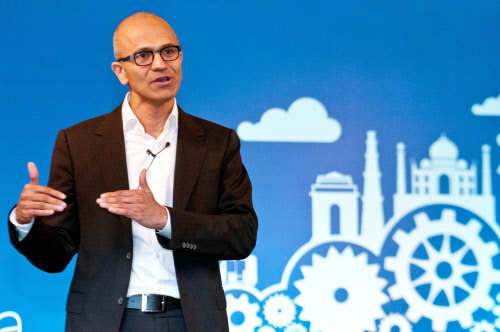 It seems like PM ’s dream of digitalising India has got wings ever after he had visited the Silicon Valley. Days after PM reached back in India, Microsoft CEO Satya Nadella announced his plans to visit India.

Nadella is scheduled to speak at an event being organised in Mumbai in the first week of November. The American technology company has organised the event for its customers, partners and developers.

The Hyderabad-born business executive will be on his second official trip to India after he came to India in September 2014 as CEO.

The event entitled ‘’ will host key Microsoft customers but Nadella, however, Nadella will not be able to visit any of the company’s India centres. The Microsoft CEO, who recently met Prime Minister Narendra Modi during his visit to the Silicon Valley extended his support to the initiative, reported The Economic Times.

Along with Nadella, some other Indian business leaders too are expected to speak at the ‘Future Unleashed’ conclave. The event will be a showcase for Microsoft’s cutting-edge technology and what it can offer in the context of Digital India.

Microsoft’s key customers and those who are expected to attend the event are Chiefs of Mahindra group, Robert Bosch, Honeywell, Kotak Bajaj, Fortis, Sony Corporation and HDFC Bank.