Spotted by the European Space Agency’s (ESA) ExoMars Trace Gas Orbiter only recently, astronomers believe this emission that existed around Mars for at least the past 40 years.


However, the aurora is just one way in which planetary atmospheres can light up. Planets like Earth and Mars glow constantly — both during the day and at night — as sunlight interacts with different molecules.
Advertisement
Seen from outer space, Earth’s green flow is actually quite faint. It can be best spotted when looking at the planet from an ‘edge on’ perspective.

Does this mean that we can breathe on Mars?
Unfortunately, the discovery of the green glow around Mars doesn’t mean that humans will be able to breathe on Mars. "We modelled this emission and found that it's mostly produced as carbon dioxide, or CO2, is broken up into its constituent parts: carbon monoxide and oxygen," said Jean-Claude, the lead author of the study published in Nature Astronomy.

"We saw the resulting oxygen atoms glowing in both visible and ultraviolet light," he added explaining how the two kinds of emission showed that the visible emission was 16.5 times more intense than the ultraviolet emissions.

Advertisement
So, while it may not mean that the atmosphere is breathable, it still contains a wealth of information for when humans eventually do plan to land on the Red Planet.

It can explain the composition and dynamics of the atmosphere, how energy is deposited by sunlight and solar winds, and how Mars’ atmosphere gets its characteristics — like auroras.

Mars and its seasons
"The emission was strongest at an altitude of around 80 kilometres and varied depending on the changing distance between Mars and the Sun," said Ann Carine, co-author of the study.

By understanding how the structure and behaviour of this green glowing layer of Mars’ atmosphere changes, astronomers can predict the planet’s seasonal changes with variations in solar activity.

Understanding how the atmosphere changes is important for future missions. The density, for example, directly affects the pull felt by orbiting satellites and by parachutes trying to land probes on the Red Planet’s surface.
Advertisement
SEE ALSO:
The biggest solar flare since 2017 spotted by NASA — and there could be more to come as the Sun wakes up

Elon Musk: 'SpaceX is building floating, superheavy-class spaceports' for its Starship rocket to reach the moon, Mars, and fly passengers around Earth 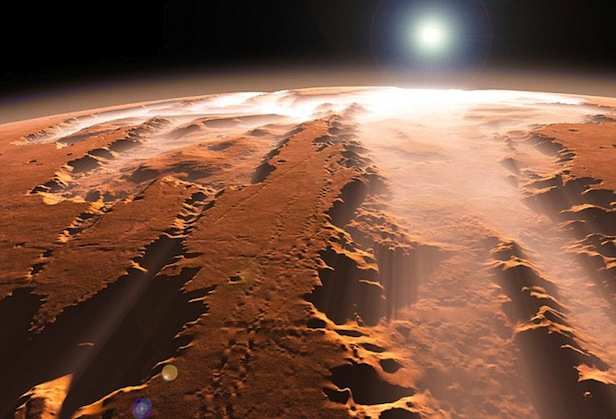