Advertisement
Prabhjote Gill
Aug 14, 2020, 11:15 IST
NASA's Ingenuity Mars helicopter tucked away under the Perseverance rover NASA
Advertisement
As the National Aeronautics and Space Administration’s ( NASA) Perseverance rover hits the two-week mark in its seven-month cruises towards Mars, the helicopter tucked under its belly just charged itself in outer space for the very first time.

If successful in its mission on Mars, Ingenuity will be the first chopper to fly on a planet other than Earth. But to get off the ground, it needs its six lithium-ion batteries to stay in prime condition.

“This charge activity shows we have survived launch and that so far we can handle the harsh environment of interplanetary space,” said MiMi Aung, the Ingenuity Mars Helicopter project manager.

For the eight hours, NASA’s team charged the batteries to 35%. A low charge state is optimal for health during the cruise to Mars, according to the space agency. Going forward, the batteries will now be charged every two weeks for the next seven months.

What happens when the helicopter reaches Mars?
Advertisement
Once the Ingenuity Mars helicopter and the Perseverance rover have completed their 505 million kilometer journey through space, NASA’s engineers will wait another two months before separating the two.


At that time, the team will be on the lookout for potential airfields that are relatively flat and obstruction-free to park the chopper.

Once a suitable airfield has been located, the rover will drive to the center and deploy the helicopter — a process that should take around six days, accounting for checks and balances. After that, it’s up to Ingenuity to charge itself using its solar panels.


When the chopper is ready, NASA is hoping to perform a series of flight tests over 30 Martian days. The first test will be a quick 20 to 30-second flight just a few feet off the ground. This will be the first flight on another planet, that too on a planet, where the atmosphere is dramatically different from Earth’s.

Advertisement
Mars’ atmosphere is 99% less dense, which means the helicopter’s blades need to spin a lot faster than they would need to on Earth. As the tests progress, the research team will incrementally increase the distance and altitude.

SEE ALSO:
India’s first private player to successfully test a homegrown rocket engine is on track for its first full rocket launch by 2021

After 10 years of trying, NASA finally bounced its first-ever laser beam off the lunar orbiter 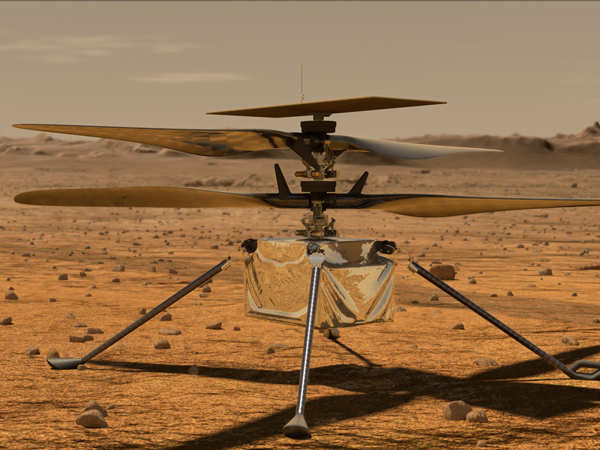