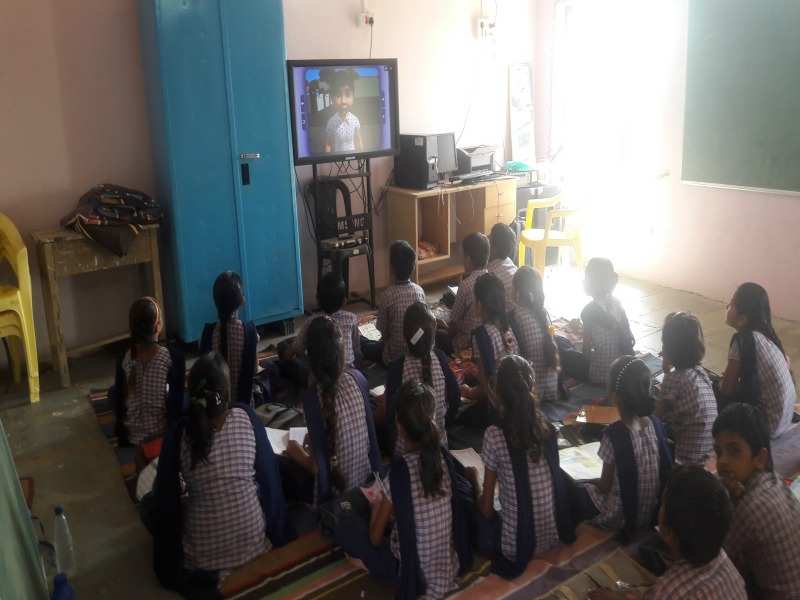 Nothing can be worse than teaching children about different cultures, monuments, experiments, etc and asking them to visualise without giving them any visual presentation.

Schools in urban areas still have the facilities and funds to take students out and show them or even have special screenings in classrooms, but what about those who study in rural areas, where even a blackboard or furniture is a privilege.
Here comes the concept of digitalised classrooms, which gives students and even teachers an audio and visual presentation of what they are learning and teaching in textbooks and otherwise also.
Advertisement This concept of digitalised classrooms is gaining momentum in urban areas as an array of companies has come up that offer computer-backed classroom teaching.
This market also gained momentum when the Indian government funded Sarva Siksha Abhiyaan for ICT@Schools programme with Rs 15 lakh per district per year.

And to make sure this initiative is also taken to the rural areas, one of the companies is ‘’ that has till now digitalised 3,300 rural government schools across nine districts of India’s western Gujarat state.

Advertisement
Two students from Nirma University, Harshal Gohil and Vandan Kamdar, came up with the idea of Learning Delight while they were pursuing MBA only.

“We came up with this idea five years back when we were studying at Nirma. We wanted to back rural classrooms with technology so that students could also see what they learn. Learning Delight is not only for students but also for teachers as technology makes teaching also easy. You can’t leave everything on a student’s imagination,” said Vandan.
Shortcomings:
When Harshal and Vandan went to different rural government schools in Gujarat, they found there was no uniformity and teachers were just verbally explaining everything to students. Advertisement
“When an audio-visual medium adds to textbook learning, it becomes a memory and you don’t forget it your entire life. Now, the words have become videos too,” said Vandan.
Challenges:
Getting a digital concept to small classrooms can be a tough task as faculty and students are always sceptical to try new methods of teaching and learning.
Advertisement “Teachers, initially, were apprehensive in learning new technology. They thought learning computers will be a cumbersome task. We had to convince them and tell them it was easy to navigate. They finally were convinced and now you can see the reach,” said Parinita Gohil, who joined forces with them later.

Parinita said motivating block level officers to adopt technology is also a task but they are changing with times.
Curriculum
Learning Delight mapped the Gujarati state board curriculum into audio-video presentations. Presently, they cater to Class 1-8. Advertisement
They also take regular feedbacks from students and teachers. Apart from textbooks, the learning is also made a delightful experience by incorporating animation, riddles, puzzles and stories, aligned to support teacher and class interaction.
Funding and future plans
Learning Delight gets donations from individuals and organisations and is taking this venture to Rajasthan next.
Advertisement

Next Story'Free' college in Europe isn't really free
Popular on BI
1
Airtel’s Africa unit is now a nearly-billion dollar business where every user pays 40% more than the one in India
2
How to open a bank savings account using video KYC
3
A 72-year old Delhi restaurant that hosted Lord Mountbatten, Raj Kapoor, Yash Chopra and Arun Jaitley says this year is about survival
Latest Stories
Trending News
'Free' college in Europe isn't really free
A top Black Lives' Matter activist who ran for mayor of Baltimore just landed a six-figure job with the city school district
14 things that are harder to get into than the most selective university in the US
COVID-19IndiaCases: 145,380Deaths: 4,167Recovered: 60,491
COVID-19WorldCases: 5.31mnDeaths: 342kRecovered: 2.23mn
COVID-19USACases: 1.59mnDeaths: 96kRecovered: 379k
COVID-19Access our Live Coverage
Popular Categories
Trending Right Now
More from our Partners