Amazon's top boss Jeff Bezos made a grand entry with a Bollywood like theme song playing in the background at the two-day mega event in India where hundreds of people waited in long queues for his arrival.

The 21st century is going to be the Indian century, he declared during his India visit. "In the 21st century - the most important alliance will be between India and the United States," he added. Advertisement
These are some of the other highlights of his address at the Amazon Smbhav event:

1. No, never thought Amazon would be a success. What has happened over the last 25 years, I wouldn't have imagined - from delivering packages myself at that time to what Amazon is today.

2. If not Amazon, I would have been extremely happy to be a software programmer somewhere.

Advertisement
3. Today, Amazon has over 700,000 people - at each stage I have had to lead the company differently. As the company got bigger, you are still figuring what to do, how to do it. Then as the company gets even bigger, you stop helping with the how and work on what. When the company gets even bigger than that, the question changes again - the big question becomes the who question. The who has been so valuable for me, I have always been trying to figure out how to hire people, who also teach me. That has been the secret to the scaling of Amazon all along the way.

4. Amazon is the best place in the world to fail. And that's because we have a lot of practice. There are experiments where you are trying something new, that nobody has done, that is high quality failure.

5. The first kind of failure you are inventing. Failure even when it's embarrassing - here's the great thing though one success is over dozens and dozens of failure.
Advertisement6. You should avoid operational failure. When you know how to do something and fail at that, it's just bad execution. That's not the failure you should be celebrating.

7. I was interested in space when I was a 5 year old boy - I have been studying rockets, rocket propulsion and space travel since I was a child. We have a choice as a civilization we can have a life of (earth is finite) we continue to grow, use energy per capita, along with an expanding civilization.

8. In the long run - hundreds of years - all the polluting industry will be done in space where there's infinite resource - earth can be the place for residence. There are no good planets - we have to take care of this one. But long term, if we want to grow our civilization we need the resources of the solar system. To do that we need an entrepreneurial approach for space.
Advertisement9. I have had the honour to watch on the internet most dynamic exciting things - two kids in a dorm room that is is today Facebook. That can't happen in space - to do anything in space the price tag starts at hundreds of millions of dollars. I want my company to make space accessible - that two kids in a dorm room can build a great space company.

10. This is something that is going to take collective action all over the world. Anyone today who does not acknowledge, those people are not being reasonable. This is a big problem.

11. We are proud of what Amazon is doing - we just announced the Climate pledge - Amazon is going to be sustainable electricity by 2030 - here in India, we are going to eliminate all plastic just 6 months from now by June 2020.
Advertisement
SEE ALSO: 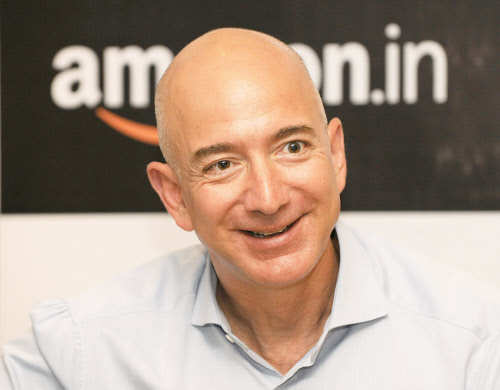