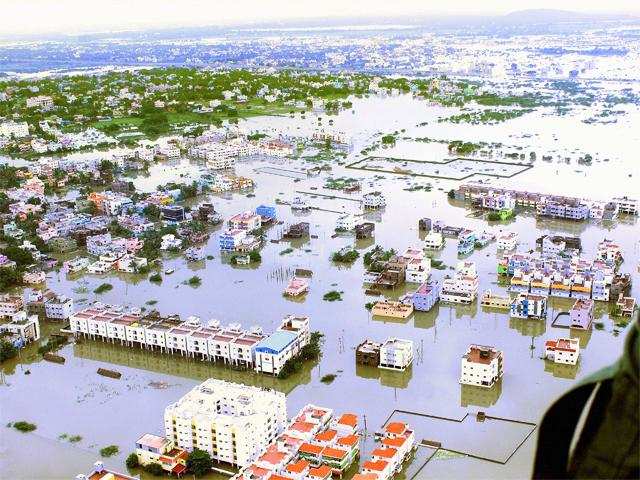 The Chennai rains have left suffering with most of them incurring losses to the tune of Rs 300 crore. It has compelled Finnish network gear maker Nokia to stop production of 3G and 4G gear at its nearby factory.

China's biggest telecoms gearmaker Huawei also said the "flood situation had affected its Chennai factory", which purely caters to export markets such as China, Asia Pacific and the Middle East.

"Out of the Rs 300 crore losses estimated by Cellular Operators Association of India (COAI), Rs 100 crore is on account of network restoration and Rs 200 crore on account of revenue losses over the past seven days," Rajan Mathews, director general of the GSM industry lobby body, said.

Advertisement
Chennai continues to reel under the worst rains in over a century with the death toll from flooding in the southern Indian city reportedly mounting to nearly 270. This has prompted the National Disaster Response Force (NDRF) to intensify relief and rescue operations in the flood-battered city and adjoining areas. So far, it has reportedly rescued over 10,000 people.

Global network vendors such as Nokia and Huawei, who have a large manufacturing presence near Chennai, have been hit hard by the floods.

Nokia said it had been compelled "to temporarily stop production at its factory" in Chennai's outskirts over the past couple of days to "prioritise safety of its employees and equipment". Some 1300 people work in Nokia's Chennai factory.

Advertisement
Nokia's Chennai works, which is amongst its key factories globally, meets the 3G and 4G network gear requirements of the India and as many as 26 export markets across continents.

A senior industry executive aware of the devastation said Nokia is closely working with its global factories in China and Finland to balance production volumes and bridge the Chennai production shortfall for meeting global customer requirements. Since Nokia follows a global supply chain, processes are in place to ensure customers can be served from its other global factories, he said.

"Nokia India is also changing inbound and outbound shipping points to Bangalore instead of Chennai," and taking steps to "organise alternate shipments of raw material to ensure minimal disruption to production in times of crisis like this," said a company spokesman in a written response to ET's queries.

Advertisement
Huawei, in turn, said the company had "established emergency support teams to ensure staff safety, equipment safety, network and services safety, as well as to communicate with customers in response to the heavy flooding in Chennai".

Huawei has an existing SEZ in Chennai where it manufactures optical network transmission systems purely for export markets like China, APAC and the Middle East.

China's leading telecom gear maker did not confirm if production at its Chennai unit had come to a standstill, but said "the factory has been affected by the flood situation", in response to ET's queries.

Advertisement
The deadly floods have severely damaged telecoms infrastructure and impacted networks across all operators in a huge way. So much so, Bharti Airtel, and Vodafone India have been struggling to keep their services going amid the incessant downpour and floods in the vicinity.

Unavailability of grid power, water-logging resulting in submerged sites and unavailability of diesel in the absence of transportation have been listed as major roadblocks in network operations in affected areas. All telcos are also facing problems in certain areas while restoring operations because of inaccessibility to the affected sites.