The Algorithm Of A Suicide Bomber 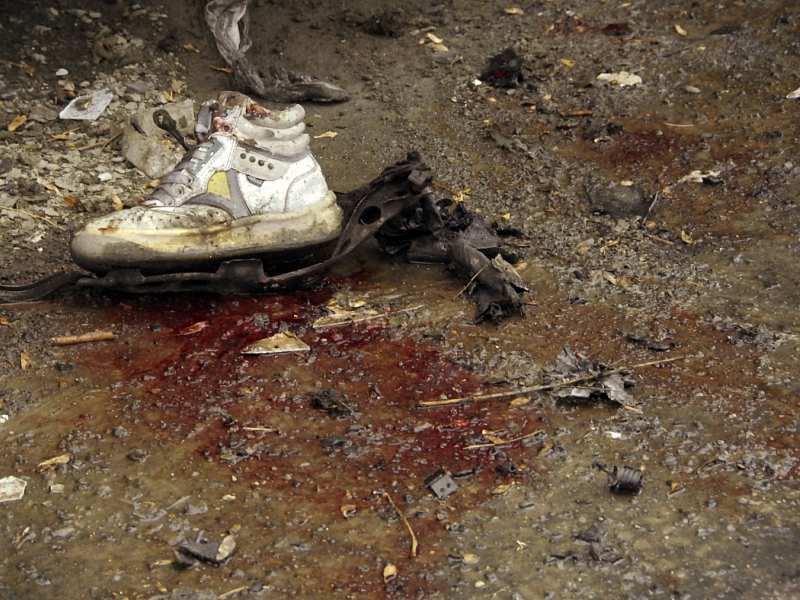 Advertisement
He sets out with a prayer on his lips. Wired and beefed with bombs from head to the bone on his hips. There is no going back. The clock ticks on. He doesn't need his specs on. Because by five, from one, two, three, and four, he'd be gone along with you in the vacation of your yawn.

He is not crippled by disease, society, upbringing, or education. He is just him. Sacked and hacked under a radical whim.

Time is precious. The last moments are vicious. Biologically his ticker is alive. Spiritually he is dead.

Because, only the dead can kill. Only the killed can be dead.

He is happy. The heaven is mapped in his favour. With the odour of the most beautiful untouched, virgin angels.
Advertisement

He has reached the destination. The nation from where he officially departs. The reaction in which his victims are casually censored in the aftermath graphic footage clip arts. Bodies are assembled in a scramble like broken eggs in a challenging scrabble.

The curse is blessed.

The Legacy of Suicide Bombing.

War is poetry for geopolitics. Most often it is a mystery who the poet is. It is always “poets”. War encourages the most collaborative commerce.

People are always unhappy with the existing government. Change becomes the staple food of the bourgeois. Their manifesto is smeared with the throbbing young blood of promise. Vibrant and striking. One that appears and feels better than that is today. It has to be. But if you just unwrap their juicy roll of delicious hope, all you'd see is an old fry dipped in new oil.
Advertisement

Revolutions are baptised as the 'Morning Sun'. Martyrs are autopsied as the 'Memorial Sons'.

In 1869, the famous anarchist, Mikhail Bakunin, and Sergi Nechayev, both Russians, published a book called 'Catechism of a Revolutionist'. A passage from the book reads, "The Revolutionist is a doomed man. He has no private interests, no affairs, sentiments, ties, property nor even a name of his own. His entire being is devoured by one purpose, one thought, one passion - the revolution. Heart and soul, not merely by word but by deed, he has severed every link with the social order and with the entire civilized world; with the laws, good manners, conventions, and morality of that world. He is its merciless enemy and continues to inhabit it with only one purpose - to destroy it."

The book had a great impact around its epicentre. From the aftershocks, seven years later, in 1876, a group was created. It was called Land and Liberty. In this group, a considerable chunk voted for the system of state to go to dogs. Then, hand over the land of Russia to its peasants. A reality that Mikhail Bakunin had been counting his beads for.

Three years from the inception of Land and Liberty, the group broke into two factions. One that that had a sweet tooth for terror. The other that was diabetic to terror. The terror group went on to become The People's Will, the Russian left-wing revolutionary organisation.

Before the World War 2 was born, the Chinese and Japanese had a warm up in 1938, with their Battle of Taierzhuang. Here, the Chinese soldiers strapped with grenades and explosives dove under the Japanese tanks and blew what they could with the girth of their bombs.

When it was time for the Japanese to exploit the suicide hashtag, they soared high and cornered the market. Literally. During the World War 2, Kamikaze pilots were engineered to fly planes into the Allied Forces' naval fleet. Their planes were not built to deploy bombs as they were “the” bombs. From torpedoes to missiles to bubbling fuel tanks to aircraft, the Kamikaze pilots had only one role. To use the instrument he is in or on and take it straight to the flesh of the enemy ships, making them bleed hard.

To the Japanese, the philosophy of death was far more supreme and coveted than defeat. According to the principles laid out in their Samurai and Bushido code, everything else comes second to loyalty and honour.

The Land of the Morning Sun, South Korea, who, cradled by the U.S.A after the split of Korea in World War 2 is not all sunshine and rainbows when it comes to the roster on suicide poll. Among the developed nations, South Korea ranks #1 in suicide rate. 14,160 people committed suicide in 2012.

As South Korea was still licking its wounds from World War 2 and the Korean bifurcation, North Korea invaded South Korea on 25 June, 1950. As part of a strategic military tactic, South Korean soldiers wrapped bombs around their bodies and attacked North Korean tanks.
Advertisement

When the suicide bombing ball rolled over to Asia, LTTE grappled it hard with its jaw like a mastiff on cocaine.

LTTE didn't spare the government, civilians, Prime Minister or their own President. They were Tigers. Wild. All they knew was to hunt and eat. In their case, detonate and inspire for a cause. Between 1980 and 2000, LTTE rocked the stage of the suicide bombing concerts.

Once the middle east understood that it was beyond just snaking exotic bellies for the connoisseurs and cheering ships of oils with the west and the rest of the velvet states, it knew it could roll its dice on its golden plate of religion.

“Jihad” becomes the dictator. Everyone else obliged to press the Quran against their foreheads out of proclaimed duty and acclaimed piety, does as the commands. As we have come to see, with so many organisations and diverse motto LeT, Al Qaeda, Hamas, Hezbollah, Boko Haram, and of course, ISIS, and lots more, Jihad is just one person. But he comes with many tongues. Or could it be, Jihad says many things, but could mean only one thing?
Advertisement

It used to be a man's game. But as the world is hell bent on giving its word to extending the quality of equality, the men behind the keffiyeh, the convenient and fashionable facial burka for the man, he started inviting women. And children. To take part in the exploding arguments for their bereaved cause.

A 2011 intelligence analyst report in the said, “Although women make up roughly 15% of the suicide bombers within groups which utilize females, they were responsible for 65% of assassinations; 20% of women who committed a suicide attack did so with the purpose of assassinating a specific individual, compared with 4% of male attackers.” The report also maintained that most of the women suicide bombers were, “grieving the loss of family members [and] seeking revenge against those they feel are responsible for the loss, unable to produce children, [and/or] dishonoured through sexual indiscretion.”

With the children it is easier. Unlike their older counterparts who are to be lured with vengeance, political, regional, religious, and sectarian propaganda, and promise of relentless whoring in the afterlife, all that the juvenile needs to be told is that “they” are the bad men.”

A child is like the icing on the cake. It looks innocent. Attractive. Can be put together into any form. And, most often, until you take the bite, you will never know what it tastes like. That is what makes them so viable. So effortless. So smooth.

Invasions take up our personal space. Demanding us to change our face and base. Our surrender will include both the gender, including the one that's tender.
Advertisement

There is no such thing as the world's most famous suicide bomber. A suicide bomber's kid won't come out and scream on the edge of rooftops, “I want to be like my father.” The world is not going to sing songs for suicide bombers. No successful suicide bomber will go on to tell his tale. There won't be any fodder from the “horse's mouth”.