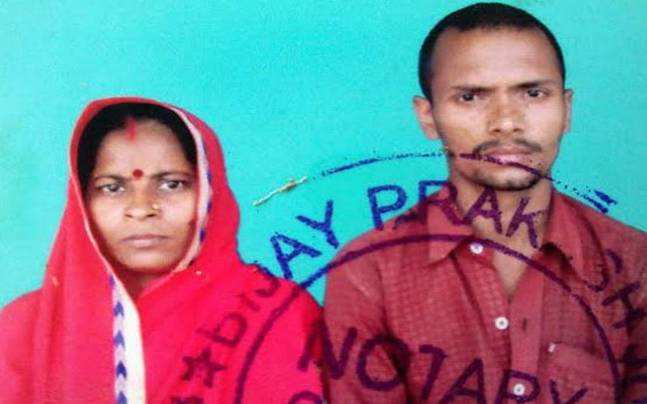 ( with her former son-in-law and present husband, . Image credit: Twitter)


In a rather unusual case of love being blind, a 42-year-old woman from Bihar ended up marrying her 22-year-old son in law in a panchayat approved ceremony, leaving her daughter and one-year-old grandson in utter shock.
Advertisement

Lalita, the 19-year-old daughter was happily married to her husband, Suraj for over two years before her mother, Asha Devi fell in love him. The romance blossomed when she had visited the young couple to take care of her sick son-in-law.

The two lovers kept in touch via long phone calls after she left their house. Asha Devi’s husband worked in a Delhi factory and was away for most of the time. In his absence, Suraj began visiting her and their love deepened.

Being madly in love, the duo quietly got married in a court ceremony last month. The most surprising part of this entire incident was the fact that the panchayat also approved their union stating that there was hardly any reason to separate them.
Advertisement

Post-marriage, the newly-weds have started staying together.

Asha Devi’s former husband, on the other hand, took his daughter and grandson away with him to Delhi, as he thought there’s no point of leaving his daughter with them.

Next StoryHere are 6 ways you can live your life passionately
Popular on BI
1
Sneak peek: Hyundai Motor to launch new Hyundai i20 on November 5
2
Fauci: 5 science-backed reasons you should keep your mask on at all times during the pandemic — even when visiting friends
3
Apophis, the ‘God of Chaos’ asteroid is speeding up — increasing the likelihood of it hitting Earth in 2068
Latest Stories
Trending News
Buying Guides
Here are 6 ways you can live your life passionately
17 of the coolest office spaces around the world
This Indian couple got married 600-feet above valley, mid-air
Popular Categories
Trending Right Now
More from our Partners