This Rs 5000 pan may just improve your sex life 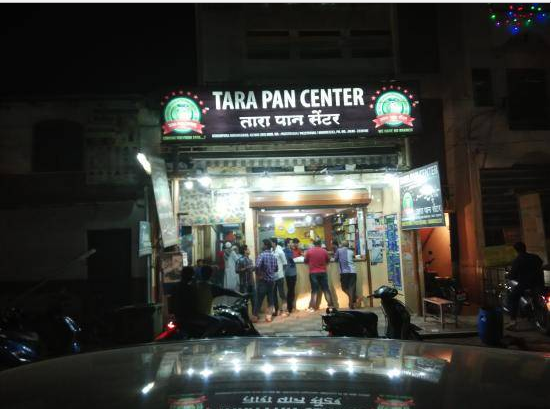 If you're one of those people who believe it's possible to fall in love with food and would rather have a plate of burger and fries for company than people, well we have a question for you- exactly how much are you willing to spend for a food item?

Okay, before you answer- allow us to give you some background.

Advertisement
Let's start with what's considered the cheapest and most widely available food item in India- the paan. A is an Indian traditional mouth freshener consisting of and a host of ingredients intended to give you a minty, fresh feeling. These are usually priced as low as Rs 10, going up to Rs 200 and are usually consumed without much thinking.

As it turns out, Tara Pan Centre in Aurangabad run by a tall, white-bearded man called Mohammad Sarfuddin Siddiqui houses the country's most expensive paan which will set you back by Rs 5,000.

Advertisement
The shop which has stood its ground since the last three decades is considered one of Aurangabad's iconic landmarks, giving stiff competition to the Ajanta and Ellora caves in the same vicinity.

What's so great in this paan, you ask? Well, for starters, the paan in question, christened the Kohinoor Paan has travelled the world and been eaten in Kuwait, Jeddah and Dubai. Once upon a time, bundles of this paan would be air-freighted to these countries first thing every morning.

But, thanks to the strict security measures which ended up spoiling the ingredients, the practice of exporting the Kohinoor Paan had to be stopped.

Advertisement
However, that had no effect on its popularity, which has remained unmatched ever since its inception.

Maybe the reason could be that the paan, as its name suggests, is sold in pairs exclusively for couples, also serves as an aphrodisiac, whose effect, Sarfubhai maintains, will last for TWO WHOLE DAYS.

He attributes the paan's unexpected popularity to the fact that couples nowadays are not hesitant to try out props when affection is lost between them, and believe it or not, the demand for this paan soars high during weddings.

Advertisement
Even though Sarfubhai has a team of 23 people to help him out with all the assorted paans that are available at his shop, the Kohinoor Paan is infact prepared solely by him.

This paan, which comes in a pair is typically sold in a colourful pack with three compartments. The paan meant for the male differs from the female one. Besides the secret ingredients that he zealously guards, the male paan comprises mush, a Rs 70 lakh per kg musk, agar, a liquid fragnance found only in West Bengal with a price tag of Rs 7 lakh per kg, saffron at Rs 2 lakh per kg, 80,000 per kg gulab- all wrapped in Kolkata's famed meetha paan patta.

On the other hand, the female version of the paan consists of gulab, safed musali, a root used as an aphrodisiac soting about Rs 6,000 per kg , less quantity of saffron, among other things- all wrapped in the same paan leaf.

Advertisement
There's more. The pack also contains a bottle of musk-scented ittar, which can be found in the third compartment and the paan has some strict instructions- The couple must consume it two hours before the intended action. Meanwhile, the ittar should be judiciously applied on themselves, their pillows and bed. Lastly, the paan can't be spit out. It needs to be consumed completely.

Not surprisingly, the first question Sarfubhai asks anyone looking for the Kohinoor paan is whether they're married!