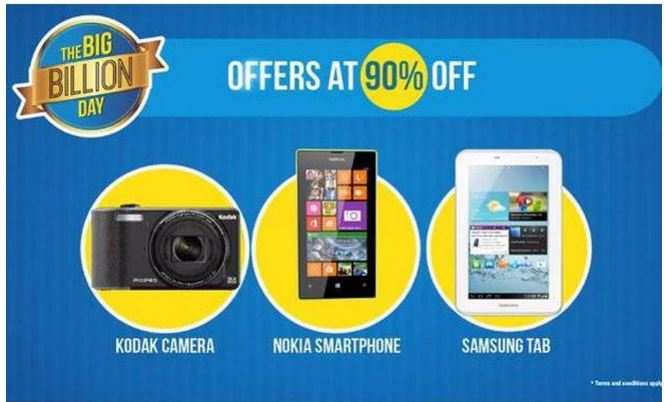 , and other websites in tow decided to make the festive season extra festive for us by offering huge discounts and a varied range of products to choose from.

This sounded great, on paper. But, the question is, was it as great as it promised it would be?

The Flipkart Big Billion Day sale lasted from October 13 th to October 18 th and the company claimed it sold 10 lakh products in the first 10 hours itself!

While, this means business for the company, as usual, whether those 10 lakh products have managed to bring 10 lakh smiles is a question that’s best left unanswered?

Advertisement
Social media for instance was up in arms against the shopping website’s age old trick of marking up prices and then offering discounts. The fact that its app kept going unresponsive uncountable number of times and most of its products were sold out, didn’t help either.

However, that doesn’t negate the fact that Flipkart did have some good deals on certain products. Hence, we at Business Insider are rounding up the good, bad and the ugly of the recently concluded sale and giving you three life-lessons that should come handy next year.

1 . Comparing is the key: The most integral part of ensuring you emerge victorious from such a sale where there are options galore is the art of comparison of process, models etc. Agreed, it’s cumbersome and tiring and makes you feel sleepy, but a good research never hurt anybody. It’s only then that you’ll know whether the discount is really worth it or if it’s the same as any other website. Trust us, your wallet deserves it.

2. Check Twitter: Twitter is a database of information you don’t even know you’re gonna need. But, it’s at its useful best during sales like these. Before making any purchase, make sure you’ve logged into the mico-blogging site and read through whatever the site’s users have to say. From complaints, hacks to finding you good deals and telling you what to buy, let Twitter be your best friend during these days

3. Don’t judge the sale by the brand: If we had to speak from this year’s experience, it can be stated for a fact that the deals at Flipkart and were quite overhyped and hardly stood up to the ridiculously good deals at .

Advertisement
This year, Snapdeal was selling a 17 inch TV for just 4,000! Can you imagine Flipkart selling something at that price?