Trans-Pacific Partnership: What lies beneath the rhetoric 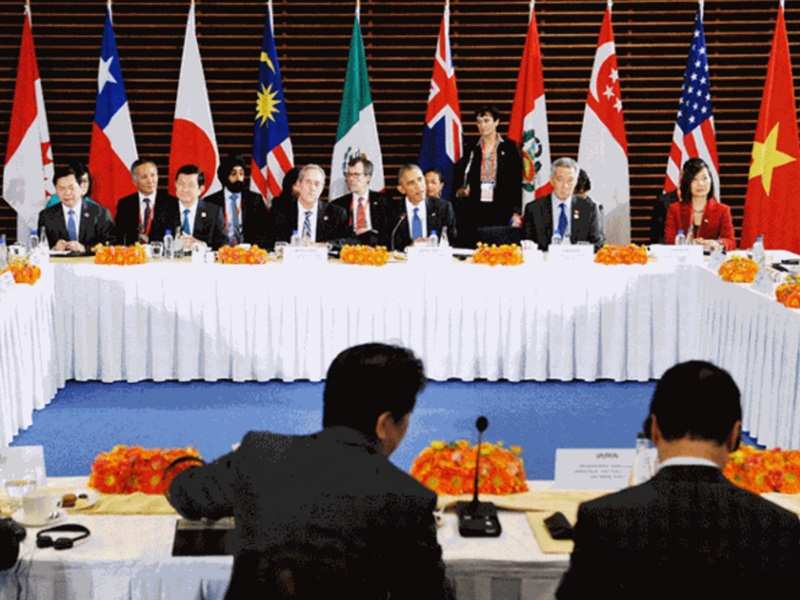 A decade ago, when (TPP) was conceived, it was proposed as a means to promote labour standards, human rights, environmental projections and prosperity in Asia without the use of force or coercion. At its , is designed as a business deal that aims at removing barriers to trade between the US and 11 other : Australia, , Canada, Chile, Japan, Malaysia, Mexico, New Zealand, Peru, Singapore and Vietnam. Considering that these 12 nations together are responsible for about 40% of global gross domestic product (), TPP is expected to lead to far reaching changes in the way trade is carried out across the globe.
Advertisement

Essentially, TPP would reduce or eliminate tariffs (taxes on imports and exports) among signatory countries, making it easier for those countries to trade with each other. It also addresses topics ranging from illegal fishing to climate change to labour rights. The US has been pushing for stricter international enforcement of rights, like patents and trademarks under TPP.

In fact, TPP is envisaged to go much beyond a trade deal and attempts to advance standards regarding environmental projection, labour rights, intellectual property, government procurement and state-owned enterprises, mostly due to the success of the GATT and WTO process which has brought down world tariff levels already.

After years of discussions and negotiations, the 12 member countries recently agreed to a final text of the pact. Considering the multi-pronged challenges involved in reaching a pact connecting 12 nations with varied geopolitical histories, this is seen as a significant milestone. If passed by Congress, TPP will give the US a boost in influencing the future shape of an emerging Asia. The partnership has the potential to become President Barack Obama’s biggest foreign policy success on par with the deal and opening of Cuba. Also, TPP would enhance and speed up Obama’s ‘Asia pivot’ strategy (which is supposed to be a comprehensive strategy encompassing economics and diplomacy as well as security), aimed at a larger role in reshaping the geopolitical and business climate in the continent.

As for Japan, a key Asian member in the group, TPP will help it strengthen its influence in Asia as a shaper of business agenda and also to enhance the presence of the US as its ally in the region which would also help it counterbalance the dominance in trade and geopolitics of bigger neighbour China.

Advertisement
For Canada and Mexico, two key members from the American continent which are already part of North American Free Trade Agreement (NAFTA)—a trade deal that took effect in 1994 under the Clinton administration by getting rid of most tariffs on goods traded among the US, Canada and Mexico—TPP would further expand the scope of trade at a global scale. Free Trade Agreement (CAFTA), which came into effect a decade later and essentially extended NAFTA provisions to five Central American nations, is compared with TPP though its scope is limited to enhancement of trade among countries within the American continent.

However, over a decade since TPP was originally conceived, it has undergone a significant change in terms of its ambitions. According to critics, this has already made it a threat to smaller peers, especially when it comes to intellectual property. Over the years, lobbyists, lawyers and corporate money are said to have corrupted its core; liberal idea of enhancing free flow of trade and turned it into something more questionable. More than a ploy by the US to use it as a hedging strategy to counterbalance China’s rise, TPP is seen by critics as a means to protect interests of big corporates, especially multinational pharma firms, as the TPP envisages provisions that would restrict access to affordable generic drugs that are relied upon by millions of people in the emerging world. Some international health groups like Doctors Without Borders have already voiced their strong opposition to TPP on the grounds that it would strengthen intellectual property laws in ways that could clearly restrict access to generic drugs in poor nations.

In June this year, President Obama’s attempt to seek ‘fast-track’ trade-promotion authority (TPA)—the right to negotiate TPP and other trade agreements which Congress could then approve or reject, but not amend—faced stiff opposition from fellow Democrats, mostly on the ground that the pact would enhance transition of job opportunities from the US to its less costly TPP peer nations, especially those in Asia, while Obama’s political attorneys argued that ongoing rhetoric about the threat to America from low-wage manufacturing hubs is exaggerated and that killing TPP would not bring factory chimneys and steel mills back to the US.

While a lot of oppose it largely due to the lack of transparency during the closed-door negotiations and possible threat to job security to some US workers, labour and environmental groups are sceptical and argue that TPP focuses more on increasing corporate profits than on protecting American jobs and wages. They also share the view that TPP would it make it easier for the US-based firms to move jobs offshore, substituting American workers for lower-paid foreign labour.

Critics also say the US attempt to project TPP as a way to curb the rising power of China is questionable and counterproductive. TPP would be worth more if China is a part of it and America’s long-term interests are best served by incorporating the Asian giant into a rules-based economic system, they added.
(Image: Indiatimes)
Advertisement
NewsletterSIMPLY PUT - where we join the dots to inform and inspire you. Sign up for a weekly brief collating many news items into one untangled thought delivered straight to your mailbox.
CAPTCHA: