Sriram IyerJul 30, 2019, 13:35 IST
The pressure on Cafe Coffee Day founder VG Siddhartha was back breaking. Before he went missing on Monday (July 29), he allegedly left a letter for the Board of Directors at Coffee Day Enterprises, which has businesses ranging from coffee chain to hospitality and financial services, listing out the reasons for disappearance.

The company had a total debt of ₹6,547 crore at the end of March 2019. And more than three-fourths of all the Coffee Day shares held by Siddhartha, his family and his other companies were already pledged to the company's creditors, according to data sourced from the BSE.


Anyone can use shares as a collateral for a loan when they are need in need of money. If the borrower fails to repay, the bank, or any other lender, can sell the shares 'pledged' with them in exchange for the loan to recover the amount. However, the seller can only get the market rate for the shares.

As the news of Siddhartha's disappearance broke, shares of Cafe Coffee Day fell 20% further depleting the value of the shares held by the lenders. The value of all outstanding shares fell by nearly ₹800 crore. taking the company's market capitalisation to less than half of its total debt at the end of the last financial year.

"This is to inform you that, Mr. V G Siddhartha, Chairman and Managing Director of Coffee Day Enterprises Limited is not reachable since yesterday evening, " read a statement on BSE. The company further assured that they are taking the help of the concerned authorities to find the Siddhartha. CCD also said the company would continue to run by the leadership team.

The Mangaluru Police suspect that the coffee baron may have jumped off the Ullal bridge on Monday night. The news agency, ANI, also posted the last letter allegedly written by VG Siddhartha addressing his employees. 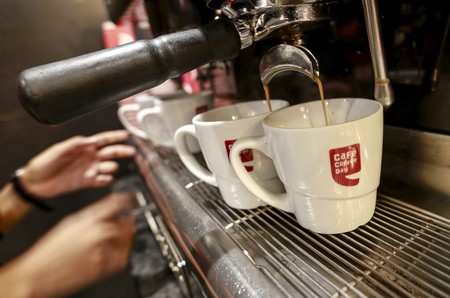 
Mangaluru City Police started a search operation at 9 pm to look for a man who might have jumped off a kilometer-long bridge in Ullal. According to the report, Siddhartha may be the missing 'man' since he reached Mangaluru at 8 pm in his SUV and ask the driver to drop him at the bridge in Ullal.

VG Siddhartha came from a coffee-growing family, which owned 15,000 acres of coffee estate in Chikmagalur in Karnataka. He launched the first Cafe Coffee Day (CCD) outlet on Brigade Road in Bengaluru. The chain currently has 1,750 outlets and over 60,000 vending machines spread over Nepal, Malaysia, Czech Republic, and Egypt, aside from 245 cities in India.

The 58-year-old entrepreneur was in talks with Coca-Cola to sell considerable stake in his coffee chain. The deal was supposed to be closed by the end of March 2020.

The coffee baron had reportedly been cornered by a cash crunch after the default by infrastructure lending giant IL&FS triggered a liquidity crisis in the country. Siddhartha had to sell his 20.4% stake in the IT firm Mindtree to L&T against the wishes of Mindtree’s founders who Siddhartha had backed since 1999.