Want To Bump Into ‘Strangers’ With Similar Interests? Check Out This Social Network... 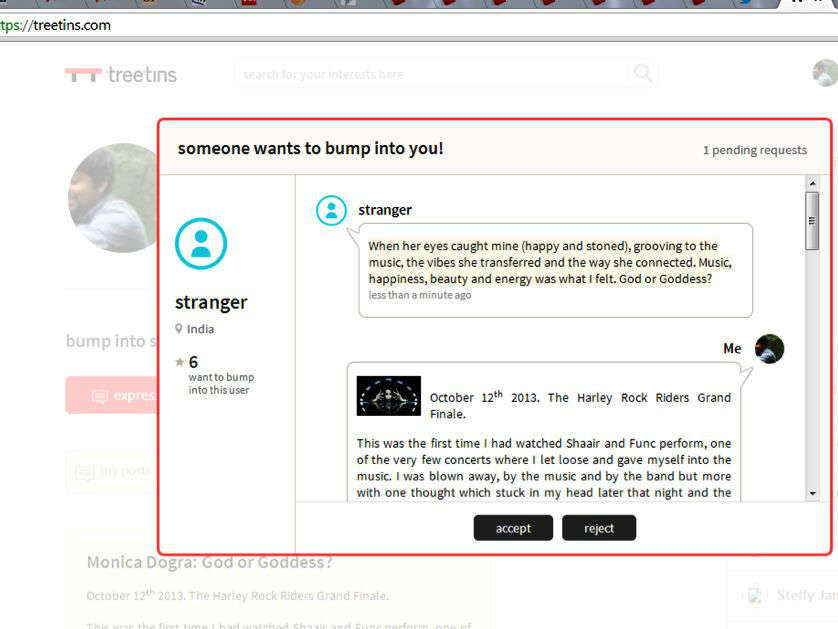 Advertisement
Go be ‘social’ and reach out to people – that’s the mantra every netizen follows nowadays. But on the traditional , you are not meeting per se as we do in prep schools. You are not among a bunch of strangers, thrown together for a common purpose, as it happens in school or workplace. Instead, you scan profiles and make a conscious decision before connecting. But that kind of approach actually keeps you confined within an extended circle, curated by your requirements and parameters. So chances are you are not reaching out to interesting strangers – with whom you can share your thoughts and ideas.

In an ideal situation, your ideas, and not who you are, should generate . And when that happens, strangers do find it worthwhile to connect with each other. The shared passion for a particular interest often brings people together and a Mumbai-based start-up has just built an all-new around that concept.

promotes while users can remain completely anonymous. The platform is quite unique, an ingenious mix of and (minus the audio and the webcam), which allows you to post all sorts of content, based on which people may decide to connect with you. is strictly maintained here, not only to ensure enhanced security but also to provide users with the kind of comfort level people look forward to when . Feeling curious? Here is a snapshot that captures the start-up's vision and viability.

Who runs Treetins.com (https://treetins.com/): A team of four including founder and three – , and . Prince, Aditya and Mohit have done MBA in Marketing from Christ University, . A former advertising professional, Prince had worked with Ogilvy and Creativeland Asia while Aditya had also been with Creativeland Asia. Prior to starting up, Mohit was with Dun & Bradstreet and One97 Communications. Chandy holds a PG diploma in PR and Corporate Communications from Xavier Institute of Communications, , and earlier worked with organisations such as NDTV and Perfect Relations. Mumbai-based Treetins is the maiden venture of the foursome, all in their twenties. The company was started in August 2013, but the Treetins.com came live only in December.

What inspired the venture: The fact that the , despite its immense potential, is not being leveraged to connect people who are totally outside each other’s orbit. According to Prince, people are mostly connected to their friends, family, colleagues or an extended circle. But there is no medium that connects people with complete strangers, in a free and friendly manner.
Advertisement

Another trigger is the immense potential when one meets new people and connects over a (the name Treetins is an anagram of the word ‘interest’). “Somewhere, we all started off as strangers, but are now living in a closed environment and not realising that meeting someone new could lead to immense possibilities,” says Chandy. “You can meet a life partner, a business partner or start a music band or form a group working for a cause. The Bombay Underground is a perfect example of this,” he adds.

What’s the pitch: It’s a social networking space on the Web that lets you meet like-minded people, outside your existing social circles, without the stigma attached to meeting strangers. Treetins is the first that lets you ‘bump’ into people, solely based on what you express or how you , rather than who you are. Anybody who joins Treetins starts and that makes the whole experience more and satisfactory.

How it works: The social platform is still in beta, but when we checked, all the functionalities were working fine. Anyone can register and log in to Treetins.com anonymously, using , or e-mail ID. Once you are there, just click the ‘express’ tab and start sharing loads of exciting things – right from your opinion and blog posts to , and links. The content goes up on the Treetins page as by a stranger, along with your location. If another member finds it interesting, he/she may want to ‘bump into’ you and start a conversation. To do so, the person will have to click the tab ‘converse’ and type his own comment regarding your post. That comment also goes to the writer as an expression from a stranger. If you accept it and choose to connect with the person, he will be added to your ‘bench’ and only then identities will be revealed. However, you don’t get to know much even then – just the stranger’s name since location is revealed by default. You can also delete someone from your bench but once that’s done, you can’t ‘undo’ it and add the person back.

You, too, can browse through other ‘expressions’ up on the site and try to ‘connect’ with strangers in a similar manner. There is also a ‘share’ option (via Facebook and Twitter) to repost interesting content. Moreover, you can ‘invite’ people to Treetins but unlike other social media, invitees don’t get added to your ‘bench’ by default and the entire process has to be followed if you want to converse with them.

Claim to fame: Treetins has introduced a secure and stranger-friendly platform for people to connect seamlessly and share their interests. The concept itself is unique and has the potential to go viral in an environment frequently plagued by online stalking, hacking and identity theft.
Advertisement

Show me the money: The start-up is currently and still fine-tuning its . The team does not want to divulge specific details at this point, but the firm is not looking at as its main source of earning (does it remind you of WhatsApp). According to the co-founders, new features are being added to the social platform and the company may soon adopt a . Other online initiatives may include collaborative idea sharing and engaging the college crowd. Gaining is another crucial area and Treetins is targeting the whole chunk of – some 1.5 billion-plus people, to be precise.

Interestingly, Treetins has taken its ‘’ concept offline and launched initiatives such as ‘Hi Stranger’ photo project and another one called Share Your Table, run in partnership with the restaurants, and in Mumbai. “It’s all about sharing your table space with a stranger in a crowded eatery,” details Aditya. “Most of the times, we don’t occupy the entire table, but don’t feel comfortable either if a stranger shares the space. We are endeavouring to change that and convince people about . In that way, there will be optimum utilisation of seating capacity, better and outside the . Plus, you get to make new friends and that is no small deal.” The programme is now active in 35 across Mumbai and the company is eyeing further expansion as it is getting loads of requests, both from restaurateurs and customers. By March 2014, may kick off in other cities like Bangalore and , leading to more .

“We will be working on our , and till March next year and will approach the for a when these things are in place,” says Chandy.

Biggest challenge: Introducing a totally new concept, especially something that people may not accept instantly, is always challenging. “We must create awareness regarding the manifold benefits such a network can bring you,” concludes Chandy.
NewsletterSIMPLY PUT - where we join the dots to inform and inspire you. Sign up for a weekly brief collating many news items into one untangled thought delivered straight to your mailbox.
CAPTCHA: