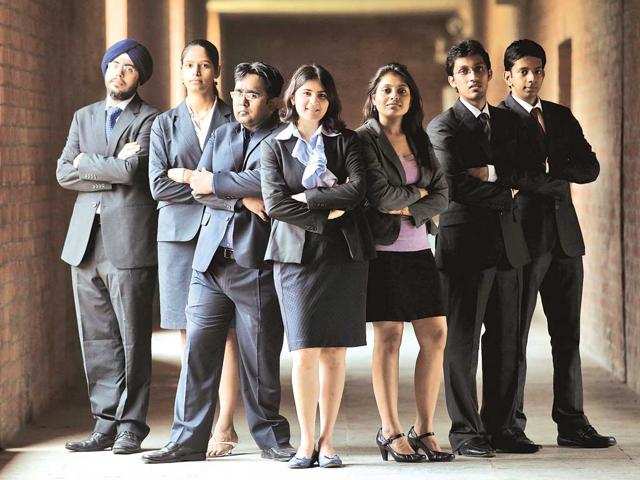 One of the strongest pillars of the - the Consumer industry - may not have shown exponential growth in the past 3-4 years, but this one has managed to keep itself insulated from the vagaries of the global macro-economic environment unlike few other vulnerable sectors. And guess who is watching this closely? It's the IIM and IIT students who have got their eyes on this sector.
Top DealsView all Offers
Fashion
Kitchen Appliances
Electronics
Auto

Yes, despite the startup era, it's the companies which are the top choice of these students even today. The Campus placement season has been seeing a promising response from this sector for years now. The sector has been stable, and in terms of salary, it hasn't dissapointed students at all.

"Isn't it better to get a lesser package in a company/sector whicg guarantees job security than a one which gives more, except that it may ditch us even before we are to begin work with them," says an IIM-Calcutta student who recently picked up a 18,ooo lakh offer with a FMCG company of repute.

Advertisement
Many B school students like him therefore have put their faith in the FMCG sector over any other offer that is coming their way. We spoke to two experts to understand this, and here are the reasons that have settled the recruitment game in the facour of the big daddies:

“Even in the future, the sector is likely to be stable in terms of salary projections,” says Gaurav Gupta - Sr. Consultant, Rewards, Aon Hewitt.

Advertisement
"With an uptake in consumer sentiments, we will see double digit growth in FMCG in the next 4-5 years. So, you can say that we are seeing a neutral to positive environment for this sector in the short to medium term. This is largely reflected in terms of the salary increases. FMCG was leading the pack in terms of salary increases unlike the service industries and financial institutions who are suffering as a result of the global economic turmoil," he said.

Notably, the overall has largely two sections - the foreign MNC firms and the Indian companies. For the foreign MNCs, Gaurav says, India has been a very lucrative destination.

"It has been a investment destination which is seen as an engine for growth in future. Hence, you see them investing a lot in terms of their plants, production activities and hiring top talent from the market. That's why we have seen growth in salary increases by them. On the Indian side, the picture is very different. These companies have seen aggressive growth in their top line and market capitalisation. The talent catchment area has increased as they now have competitors operating even in local markets who are also hiring their employees. From that perspective, the large Indian companies in this sector are competing with these local businesses which may be strong in the area they operate, and therefore have been looking to bridge the gap in pay levels,” he says.

Advertisement
Moreover, there has been critical focus on ring fencing of talent in this sector. This is because talent movement across sectors has been worrisome. A lot of service firms banking, telecom, insurance and e-commerce are hiring these talent. This is why consumer industry is trying to give higher increases and bringing in sincere key talent while also retaining existing ones.

Meanwhile, Gurdit, who is also Sr. Consultant, Rewards at Aon Hewitt, informed that even as the FMCG sector has traditionally seen lower attrition rates than India average (13.5- 14% over the last 5 years consistently against an India average in the 16-18% range, and on 13.7% currently), there has been no clear trend whether it has been increasing or decreasing.

Moreover, the key talent attrition is extremely low in this sector. In the last 4-5 years, it has been below 5% and this is both voluntary as well as involuntary. Notably, the way key talent is defined is it’s a combination of high performance, high potential as well as business critical skills which are difficult to find in the market. Typically organisations earmark about 10-15% of employee base as key talent, however, it varies with different organisations. Also, key talent is differentiated on a set of factors.

Gurdit explains further: “Firstly, from salary increase perspective, what we found is that over the last 3-4 years the differentiation in the salary increases given out to key talent v/s an average performer has been increasing. This is not just in FMCG, but across sectors. However the amount of differentiation in the consumer space is slightly higher. The ratio of salary increases shows that a key talent employee would typically be paid 1.5-1.8 times higher of what an average performer would be paid. Now, if you keep aside the compensation increases, the other ways companies are differentiating key talent is - they take a call to benchmark key talent at a position slightly higher than others. From the perspective of non-monetary rewards, these employees get accelerated growth opportunities, better exposure to leadership, more meaningful roles and rotation of roles in order to develop their skills faster.”

Advertisement
To this, Gaurav adds: “With regard to foreign MNCs, we have seen a lot of global mobility programs as well, especially for key talent.”

Meanwhile, citing a few challenges the sector faces, Gurdit says: “Traditionally FMCG is known to have the best talent in the market. Therefore, war for talent in this sector is pretty high. That's the reason why most FMCG companies will typically have really good policies and from total rewards perspective, they are well placed to retain best talent. However, one of the challenges is the new lot – startups - which is absorbing the best talent and paying high salaries. For this reason, FMCGs have started focusing on how to retain younger talent. Companies are bringing in programs to cater to the Gen Y employees, they are bringing in more flexibility work arrangements to take on this challenge.”

Advertisement
Also, Gaurav points out that the emergence of tier 2-3 FMCG players pose a huge threat to the bigger players. They are locally strong and are pulling talent. FMCG industry may have to look at curbing this in future.