What Happens When The Supermoon Rises Twice In The Same Month 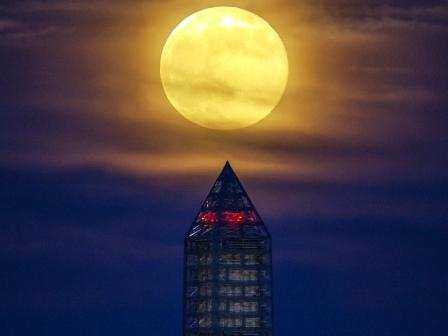 Advertisement
Mooning over the might be considered poetic, but here we are, eagerly waiting for a celestial wonder that will happen bang on Friday, January 31. Well, most people and sites claim that the D-day is January 30 but other organisations are of the opinion that here in India, we are going to see the (or the closest thing to it, you may say) rise on January 31 at around 3.30 pm in the afternoon. And this is the of the month. The first supermoon came up on New Year’s Day and two supermoons in a single calendar month won’t happen again until January 2018, according to EarthSky.org.

But hold on – you must be wondering by now what this supermoon is all about. As the name suggests, supermoon is the biggest ever Moon one gets to see when the Moon is at its – the point in its orbit that is closest to Earth. The term was coined by astrologer over 30 years ago and he clarified the supermoon as “a new or which occurs with the moon at or near (within 90% of) its closest approach to in a given orbit.”

Now you understand that there’s a catch. The Moon can be closest to our planet and we may still not see it, if it’s a – a time when the Moon lies directly between the Sun and the Earth and we can’t see its illuminated surface. Earlier, the supermoon was called perigee full moon or perigee new moon as the case might be.

Supermoon appears about 14% bigger and 30% brighter than the usual full moon, according to . However, both supermoons in January 2014 happen to be new moons, which mean even this time, it will be barely visible in the . But don’t lose heart. According to , an organisation aiming to popularise astronomy, the young moon (the phase just after the new moon) will rise at around 3.30 pm in the afternoon of January 31 and it always looks great when the Moon is hanging near the horizon.

“That is when illusion mixes with reality to produce a truly stunning view,” according to NASA. “For reasons not fully understood by or psychologists, low-hanging Moons look unnaturally large when they beam through trees, buildings and other foreground objects.”
Advertisement

But even if it doesn’t show up on Thursday-Friday (January 30-31), three more supermoons will be coming up this year – on July 12, August 10 and September 9. And they will be all full moons, which are bound to look spectacular. Especially the August supermoon, as it will be closest to the Earth this year – some 356,896 km away. The full moon on March 19, 2011, was even closer, just 356,577 km away from the Earth. The last time the full moon was so close was in 1993, according to NASA. It was about 20% brighter and 15% bigger than a regular full moon.

However, the perigee or the nearest point between the Earth and the Moon can vary by as much as the Earth’s diameter. On an average, the Moon is about 30 Earth diameters away from the planet.

Interestingly, we also had a on January 15 this year. A minimoon is nothing but a full moon at its apogee – the point in its orbit that is farthest from the Earth. Therefore, it is the smallest-in-size full moon when you watch it in the sky.

As is common with any other astronomical phenomenon, the supermoon got its fair share of blame for a lot of maladies – right from causing insanity to devastating floods. Although those things are nothing but fiction, here is one alarming fact. The Moon is moving away from us and it could be totally gone one fine night. According to scientists, it was only 22,530 km away from the Earth in the beginning but now, it is about 384,402 km away. It has been found that the dear old egghead is gaining strength from Earth’s rotational energy and uses it to propel itself about 3.8 cm higher in its orbit. So it could really be bye-bye Moon one day and we suggest that you have your fill of it while it is still there.

Image: Wikimedia Commons
NewsletterSIMPLY PUT - where we join the dots to inform and inspire you. Sign up for a weekly brief collating many news items into one untangled thought delivered straight to your mailbox.
CAPTCHA: