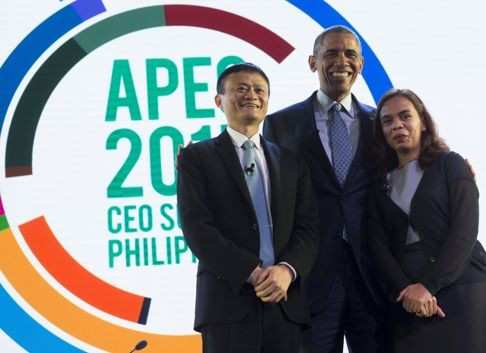 At the APEC CEO Summit, a young PH scientist was the showstealer even as she shared the dais with e-commerce giant founder , due to her splendid creation that not only had everyone in the plenary surprised but also left the US President , who was hosting the panel, completely in awe of her.
Advertisement

Mijeno, an engineer and Greenpeace member came up with what she named the Sustainable Alternative Lighting (SALt) lamp – an environment friendly alternative light source that runs merely on two table spoons of salt and one glass of tap water. It is made of tediously experimented and improved chemical compounds, catalysts, and metal alloys that when submerged in electrolytes result in generating electricity. This lamp can operate for eight hours at one go, and simply by replenishing the salt solution one can get another 8 hours of light.

It’s consumable inside has to be replaced one in a year for which one has to spend $6. The cost of the lamp has also been priced very low at $20. The SALt project is providing lighting to a few areas without electricity with the creation of such lamps that run on saline solution. The same solution is also used to charge mobile phones, Mijeno said during the forum.

“Most families living on island are not connected to power grids, so they mainly use kerosene and fuel-based lamps as the main source of lighting, and we know the danger that kerosene lamps pose—it can cause fire accidents, it emits black carbon—so that's the main reason why what we want is, we wanted to provide this people with a lighting option that is more cost-effective, that is more safe, more sustainable, and environment-friendly, by a way of a lantern that uses saline solution or ocean water as a means, a catalyst to generate electricity,” she said.

“In turn it will be able to power up LED and of course power up a USB port where you can also charge low-power mobile devices like your phone, which is very essential in times of emergencies or disaster scenarios,” she added.

Advertisement
Impressed with the innovation, Obama said, “Aisa is a perfect example of what we're seeing in a lot of countries—young entrepreneurs coming up with leapfrog technologies. But the point is, they didn't have to make some of the massive infrastructure investments. This is part of the reason why the old idea of development and environmental sustainability, I think, is outdated. It does raise the issue, though, how can both government and larger companies be assisting in creating a climate for innovation that encourages young entrepreneurs like Aisa?

Because of its inspiring vision and ground-breaking innovation, the has received various awards and recognition from organizations in the Philippines, Singapore, Japan, and South Korea.