Why India’s relationship with Russia is so special

SCMPSep 12, 2019, 13:15 IST
Prime Minister Narendra Modi with Russian President Vladimir Putin visits the 'Zvezda' Shipbuilding Plant on his two-day visit, at Vladivostok, in Russia. (Photo) (
The recent summit between Russian President Vladimir Putin and Indian Prime Minister in Vladivostok underlined the countries’ harmonious strategic orientation. In what Modi called a “unique case”, India extended a US$1 billion credit line to Russia to develop its Far East, as part of India’s new “Act Far East” policy, a complement to the “ Act East” policy which seeks to deepen ties with Southeast Asia.

Modi and Putin also reached a preliminary agreement on the induction of skilled Indian workers into Siberia. Urging both nations to “deepen the bond”, Modi said: “India is proud of the achievement of the Indian diaspora. I am sure here in the Russian Far East too they will make an active contribution towards the region’s progress.”

The Russian Far East is a federal district distinct from the Siberian federal district, stretching from Lake Baikal in eastern Siberia to the Pacific Ocean, with an area of 6.2 million sq km, or a third of Russia. Resource-rich and sparsely populated, it is viewed with muted anxiety in Moscow as an area that may be slowly taken over by China’s steady demographic creep.

This relationship has withstood the vicissitudes of a global order, through the menacing certitude of the cold-war decades when the Soviet Union was one of two poles, to the post-September 11 uneasy world (dis)order where Russia is the inheritor of a shrunken Soviet mantle both geographically and economically.

Notwithstanding disappointments in the Boris Yeltsin period, such as when the Russian president condemned India’s nuclear tests, and Russia’s discomfiture over the visible improvement in India’s relations with the United States since late 2008, both Moscow and Delhi have maintained mutual trust.

If the US, Russia and China are the core global strategic players, then India and Japan are potentially important swing states. Tokyo, while committed to the US-led alliance, is seeking to improve its position with both China and Russia. To this end, Japanese prime minister Shinzo Abe was also in Vladivostok recently for the Eastern Economic Forum to explore greater economic engagement in Russia’s Far East.

Russia’s economy is weaker and this is borne out by the International Monetary Fund’s global list of national gross domestic product. Russia’s GDP, at an estimated US$1.649 trillion this year, is ranked 12th, against Japan’s GDP in third place and India’s GDP in fifth place.

For China and Russia, there is deep political and strategic cooperation. But the stark economic subaltern
status that Moscow has to accept and the demographic imbalance in the Far East causes deep anxiety. Moscow recalls China as the junior partner during the cold-war decades, and the inversion of roles is galling.In this context, the Russia-India relationship may be characterised as one of kaleidoscopic polarity, wherein both nations have a deep foundation of strategic consonance and yet allow for a degree of issue-specific flexibility. This is reflected in an 81-paragraph joint statement issued at Vladivostok. 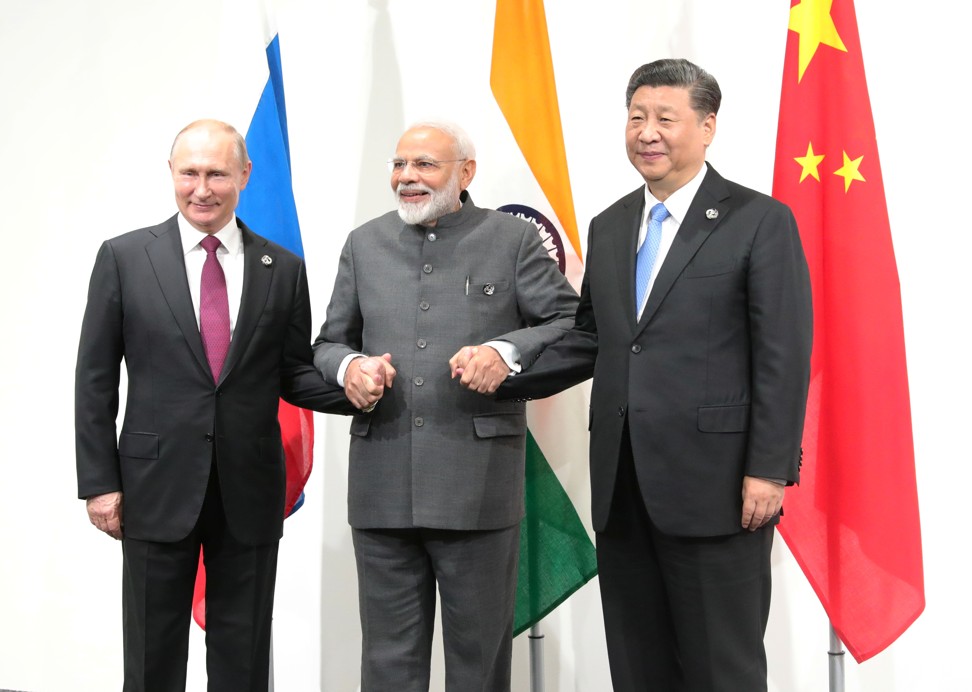 Deep geostrategic concerns underline the relationships between Russia’s Vladimir Putin, India’s Narendra Modi and China’s . The three leaders meet on the sidelines of the G20 summit in Osaka, Japan, on June 28. Photo: Reuters

Thus, Russia and India can have different positions on China’s Belt and Road Initiative to link economies into a China-centred trading network, or the US-led Quadrilateral Security Dialogue with India, Australia and Japan. At the same time, Russia and India remain committed to “multilateralism”, underline “the primacy of international law” and emphasise “their commitment to the purposes and the principles stated in the UN Charter including the inadmissibility of interference in the internal affairs of member states”.For India, this last point is especially relevant given developments in Kashmir where Moscow’s support has been particularly welcome against China’s uncritical support of Pakistan and the ambiguous US position.India has its own tightrope to walk with China over their festering territorial disputes and China’s support of Pakistan, whose army supports anti-India jihadi terror groups and whose penchant for nuclear sabre-rattling China tacitly endorses.
Early next month, Modi will receive Chinese President Xi Jinping and India’s “special and privileged” relationship with Russia will be on the agenda.

President Xi is likely to be keen to ascertain how the Vladivostok agreements affect China’s security concerns. Particularly as India and Russia now see themselves as “stakeholders” who have “agreed to intensify consultations on complementarities between integration and development initiatives in the greater Eurasian space and in the regions of Indian and Pacific Oceans”.

Will the Indo-Pacific become more animated with Russia’s entry when the Vladivostok-Chennai sea route becomes a reality? Commodore C. Uday Bhaskar is director of the Society for Policy Studies (SPS), an independent think tank based in New Delhi.

(The above articles is based on personal views of C. Uday Bhaskar, Business Insider India has not edited the article).