Xiaomi flash sale: Day 1 goes horribly wrong as Mi 5 gets sold out even before sale begins 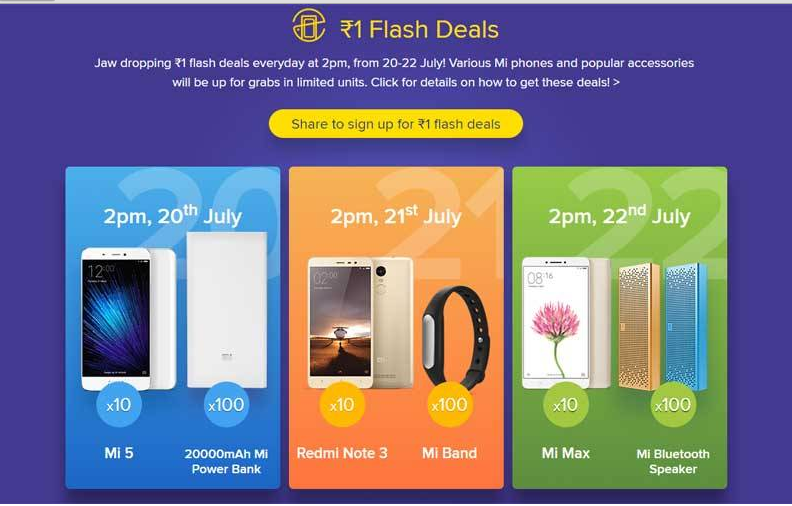 The main crowd-puller was the flash sale that would take place daily from 2 pm on these days. As part of the sale, Xiaomi promised that it would offer its phones- including the Mi5, Redmi Note 3 and Mi Max and its powerbank and other devices at just Rs 1.

Naturally, the excitement was palpable. Xiaomi’s excellent word of mouth ensured that news of ‘getting a phone at Rs 1’ spread wide.
The clock was ticking. On July 20, the first day of the flash sale, all eyes were stuck to the clock. 2 pm was eagerly awaited.

On the first day of the sale, the company had claimed that 10 units of the Mi 5 and 100 units of the 2000mAh Mi power bank were up for grabs at a surprising cost of just Rs 1.

Advertisement
To expect Xiaomi to actually give out 110 of its products at just Rs 110 was obviously an overstatement, but people did have hopes of being the lucky 5 or10 who could actually make the most of the deal.

However, things went horribly wrong just as the clock struck 2 pm. Users claimed that the website showed that Mi5 and later the Mi powerbank was ‘out of stuck’ even as it was 2 pm.

The sale began, and in a way ended. Questions then arose of whether there was a sale in the first place.

The doubt was reinforced with the fact that when one tried opened the Xiaomi website at around 2.03 pm, they were already being directed straight to the next day’s sale offers apart from there being an option to buy the Mi products without the offer at a slashed price. Reportedly, the Mi 5 has gotten a proce cut of Rs 4000 for the next three days.

Users naturally took to social media to voice their anger at Xiaomi for the flash-sale that went horribly wrong.

Lol this @xiaomi flash sale is so fake!

@hbarra @xiaomi @XiaomiIndia Frustated with all those fake "flash" sales...all these products are claimed by their employees.

Infact, the handful which did make it to the checkout page claim that their phones mysteriously disappeared after a while.

@hbarra @xiaomi
Added to Cart and went Out of stock #Xiaomi #Flash_sale pic.twitter.com/JYpPHm2T9O

We tried reaching Xiaomi for a comment but to no avail. The company did however come out with a winners list that said little.