Indo-Israel defense ties: What Modi should pitch for the country 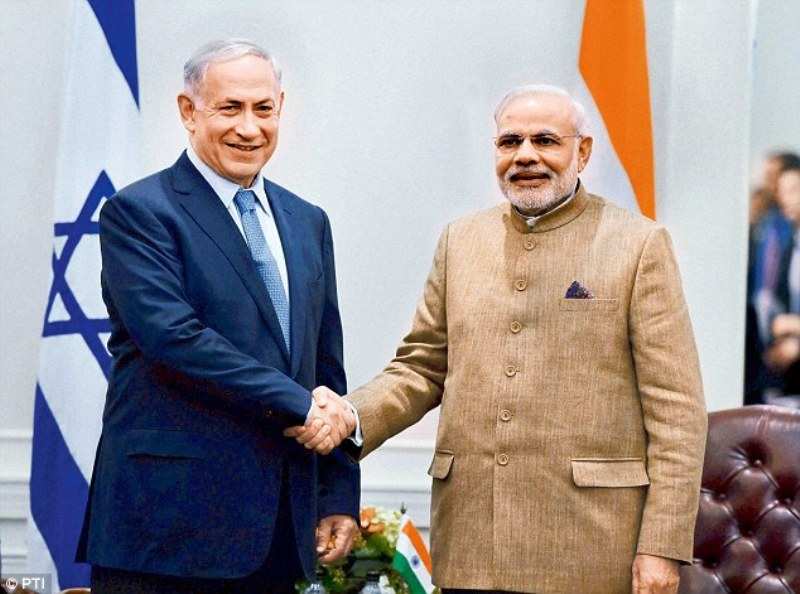 Amidst strong protests from the opposition, is all geared up to visit later this year. He will become the first of India to visit the country. Prior to Modi's visit, External Affairs Minister, Sushma Swaraj will visit Israel, Jordan and the Palestinian territories. Modi had visited Israel as chief minister of Gujarat in 2006. As a Prime Minister, he had met his Israeli counterpart, on the sidelines of the 's annual session last year followed by Rajnath Singh's visit to Israel in November to boost counter-terror cooperation.
Advertisement

New Delhi voted to recognize Israel in 1950, but fear of alienating its large Muslim population, and its need to maintain strong ties with the Arab world resulted in New Delhi adopting an unsympathetic and somewhat hostile posture toward Israel. Since 1992, India is maintaining a formal diplomatic relationship with Israel which resulted in the visits of President Ezer Weizman in December-January 1997 and of Prime Minister in September 2003. However this warmth has not been reciprocated from the Indian side till now but after the formal announcement of Modi's visit this will change significantly and will usher in a new era of improved Indo-Israel relations in the fields of defense, innovation and science & technology.

Modi has improved security ties with the U.S. and Israel as he seeks to turn India into a global manufacturing hub. At the same time, India has reduced its reliance on top weapons supplier Russia, which has not displayed any weapons at the air show for the first time in at least six years. Modi’s administration has cleared about $20 billion worth of arms purchases since he took power last year. He raised the FDI limit in defense to 49 percent from 26 percent in a move to boost manufacturing.

India has become one of the most important export markets for the defense industry, and spends more than $1 billion in Israel every year, out of an expenditure of $6.5 billion in 2014. India would buy 8356 Israeli Spike ATGM's, 321 launchers, 15 training simulators and peripheral equipment, for $1 billion, from Israel's Rafael systems.
Advertisement

India bought 16 "Heron" drones from IAI over the last few years for about $200 million, as well as 250 "Spice" smart bombs from Rafael Advanced Defense Systems (RADS) .The zenith of the Indo-Israeli relationship was the joint development of the Barak 8 surface-to-air missile system, including both maritime and land-based versions. India purchased about $2 billion worth of the missiles.

What India should gain from the visit?
This visit could seriously embark a new era of strategic partnership and a win-win situation for both India and Israel. Israel is flexible when it comes to the transfer of technology tailored exclusively for India and they had shifted away from a buyer-seller relationship towards a stronger and more equal partnership that resulted into joint productions and co-developments. In return, Israel, with the help of wants to establish a logistical infrastructure in the given the importance of maritime trade to the Israeli and India's dominance in the Indian Ocean.

Most of the time, the term, transfer of technology is not transparent in nature and what we get is the peripheral technology not the core one. However given the cultural and traditional background, for the last two decades Israel considers India as its most trusted partner in Asia. India is developing FGFA with Russia in a joint venture which is incurring huge cost over-runs and delays. Modi should try to bring back key tech-transfers in the areas of better avionics, advanced head mount digital suite and Beyond Visual Range(BVR) missiles not only to arm FGFA but it will also help in developing the futuristic Advanced Medium Combat Aircraft(AMCA) and it could cut the cost significantly. India also needs AESA radar system technology and in developing that Israel could be a great help. Israel is not only making cutting edge technologies for fighters and drones but it has an equally developed small arms manufacturing set-up. It is well known for its TAVOR and GALIL assault and sniper rifles. If India really wants to achieve a credible defense manufacturing infrastructure it needs to in innovation, research and development and Israel could be very useful for the same.