Explainer: Why GDP matters and how India uses two methods to calculate it

Advertisement
Prabhjote Gill
Sep 3, 2020, 17:09 IST
How India calculates its GDPUnsplash
India’s (GDP) dipped by 23.9% between April to June as the coronavirus pandemic took hold of the economy. This is the worst that India’s GDP has ever contracted and is at a 24-year low. This in comparison to last year, when GDP was up by 5.2%.
Advertisement


It’s not just India, other countries around the world are also bearing the impact of COVID-19. Japan, for instance, reported its worst GDP on record last month.

Why is important for any country’s growth?
Gross domestic product (GDP) is an important metric for any country. It helps measure the total monetary value of goods and services flowing through an economy over a particular period of time. In times of crisis, like the coronavirus pandemic, the GDP, along with other , is an indicator of the Indian economy’s health.

and the ways to calculate it?
This includes not only goods and services that were produced by domestic firms, but also the output generated by foreign companies in India as a result of foreign direct investment (FDI). As long as output is generated within a country’s borders, the government will count it towards the GDP.

There are three ways to calculate a country’s gross domestic product. And, in theory, no matter what method you use — the end result should be the same value.
Advertisement


As their respective names suggest, the expenditure method calculates GDP according to how much money was spent and the income method uses the amount of money earned.

The Gross Value Added (GVA) method or the factor cost method measures GDP by calculating value addition that was generated by each sector of the economy as it moves through the supply chain.

How does India calculate GDP?
To assess India’s productivity, the GDP is calculated using the factor cost method across eight industries and the expenditure method is used to analyse how different areas of the economy are performing.


Advertisement
There are four parts to the expenditure method. Private consumption includes things like buying a car or eating out. Only final consumption is taken into account.

An existing house, one where the owner is technically paying rent to himself, will count towards private consumption. However, buying a new house will be counted towards the second part of the formula as an investment.

This is because a new house will be looked at as a good that will be used in future production. The same goes for other buildings, heavy machinery, and leftover scraps.

The third aspect of the expenditure method is government purchases. This includes salary to employees, direct benefit transfer (DBT) payments, pensions, subsidies and other ways that the government spends its money for the public good.

However, not all goods within a country are homemade. Some are bought from other countries. So when calculating foreign expenditure — the value of imports needs to be subtracted from the value of exports. Imports are already accounted for within the first part of the expenditure method, private consumption.

Advertisement
What is the factor cost method of calculating GDP?
The GVA figure of India’s economy is arrived at by calculating the net change in value for each sector over a designated time period.

The eight industry sectors that India takes into account are:

The GDP number from the two methods may not be an exact match but the level of discrepancy should be minimal. 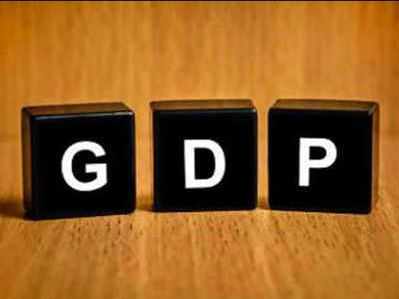