Caste and religion: The identities that need to be relooked for development 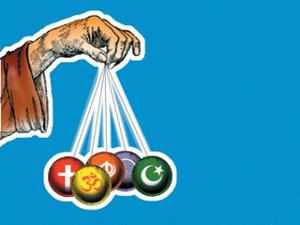 Two recent events have a lot to offer in terms of understanding India's slow and clamorous development process. The first of these is the ghost of Mandal Commission Report haunting India 25 years on. The second is the relatively innocuous census data of 2011 that has been released recently.

The first started with a series of rallies (the last one being held in Ahmedabad) demanding reservations for the relatively well off community of Patidars or Patels in . The demand for reservations is particularly misplaced in the historical context as the Patels were the people in the 1980's who were against the reservation system. Also, the Patel agitation now should raise some serious questions about rethinking and redesigning the reservation system.

Does the present reservation system benefit the socially backward for whom it was made? Does our changing reality call for an economic basis for reservation rather than one based on social backwardness? Does the present system lead to mainstreaming of the masses and bring on social justice? Does it ensure equality in society? How long should it continue? Are alternative methods of mainstreaming feasible? How many generations and how many times should a person be entitled to reservations are all questions that not only the policymakers but the society as a whole should ponder over. One must keep in mind that the Great wanted reservations to end after ten years. It has been 68 years and yet the system continues. Just continuing with the past systems like reservations as they exist today militates against the idea of a thinking and a democratic society.
Advertisement

It is also important to understand the mindset of the 'race to the bottom' by the community and political leaders wanting to secure reservations for their community members. Today the reality is that people want economic benefits like jobs far more than they hate social backwardness. It forms the basis of this 'race to the bottom' where most communities do not mind a social backwardness tag in lieu of economic benefits.

Also a country where almost half the seats in various facets of government service are reserved militates against the idea of a meritocratic society- the best man/woman for the job. Social justice for somebody should not be the basis of social injustice for somebody else especially if it could lead to serious damage to society. Thus, the need is for a rethink of India's reservation policy.

Another major development was the release of the religion based census that showed that the Hindu population is just below 80% in India. The Muslims continue to constitute the second largest majority with a population of just over 14 percent. Religious data is often questioned for its release date and also at times to showcase the fall in Hindu population and rise in Muslim population. While these are popular narratives, that may not hold the scrutiny of reality and data, they underscore an important point that religion continues to be a predominant identity in post independent India even after 68 years of independence. These socio-historical identities continue to be relevant and continue to be used by political parties for garnering votes. It at times acts as an impediment to social and economic progress.
Advertisement

In the years ahead India should work towards pushing these identities backward or realigning them to enable the rise of a meritocratic society based on ethical and moral values. That will surely help in improving India's developmental outcomes.