Tariff war started by Reliance Jio is going to hurt revenues of mobile companies. Here’s how 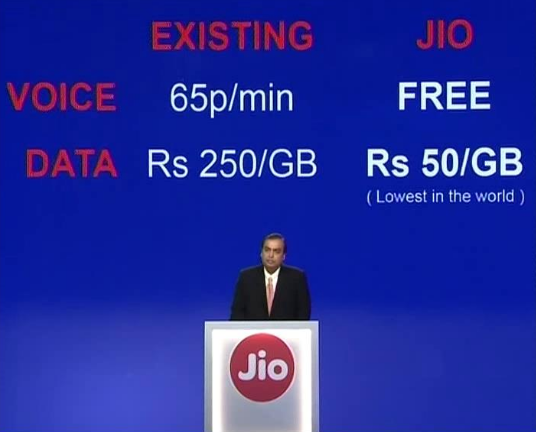 Amidst this pricing war, the telecom players are losing out on the big picture-revenues. As per industry experts, a 6% growth is most likely to be seen by the top mobile carriers of India over the next four years. Due to disruptive price model, there has been a reduction in the data revenue growth rates from 70 % to 30 % last year and analysts have warned that in the upcoming mega spectrum auction, things will only turn bad for incumbent carriers.

Reliance Jio has pre-launched its free offers and it has enabled it to garner 20% data volume market share. This further started a data tariff war among the incumbents and a slowdown in overall data revenues for the sector.

Lower data growth is expected to be translated in top telecos reporting lower Ebitda (earnings before interest, tax, depreciation & amortization) over the next three years.

Reliance Communication&rsquo;s Ebdita has been estimated by 16% and 18 % for F17 and F18 respectively.

said that RCom&rsquo;s core Ebdita has been under pressure with the loss of the 900 Mhz spectrum in five circles and migration of its CDMA customers to a 4G network. It expects the Anil Ambani-led company to potentially post losses during F2017 hit by high interest and depreciation & amortization (D&A) costs.

&ldquo;Multi-brand spectrum auction would lead to a higher 'net debt to ', a key indicator of a stretched balance sheet,&rdquo; an analyst told ET.
According to Idea&rsquo;s &quot;net debt/Ebitda&quot; would rise to 3.8x in F17 from 3x in F16 based on the No 3 carrier potentially taking on an additional &quot;$2 billion of spectrum debt&quot; based on fresh airwave purchases in the next auction.

However, Bharti-Airtel&rsquo;s is expected to stay comparatively lower at 2.4-to-2.5x as they expect India's No 1 mobile carrier to spend well under $1 billion in new spectrum purchases next month.
Advertisement

&quot;We also expect Bharti's net debt/Ebitda to stay around 2.5x through F17-18 despite participation in the spectrum auction, given that it continues to de-lever in Africa, having already announced sale of assets worth $3.25 billion in the last 24 months,&quot; Goldman Sachs said in a note to clients.