The Ola-Uber rivalry in India – when competition became ridiculous 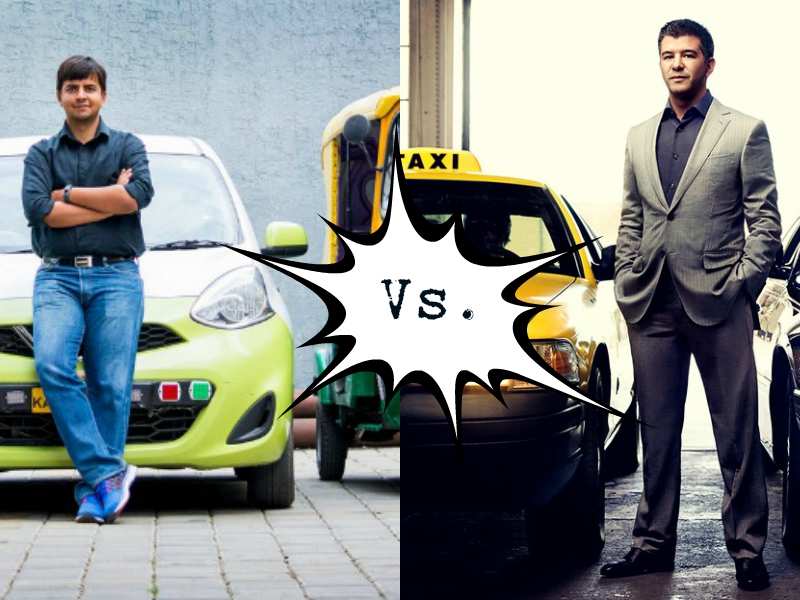 Much like the Flipkart- Amazon tussle in India’s e-commerce space, the Ola- Uber battle in the online cab aggregation sector is also heating up.
Advertisement

Looking to dominate India’s $9 billion industry, both taxi-hailing apps are promising hundreds of millions in new investment, and are willing to go that extra mile to offer Indians a ride, and more. The battle for the Indian market has even been dragged from the streets to the Court.

Here are a few grounds where Uber and Ola locked horns, just to get a bigger piece of the Indian pie:

Raw Money Power:
Looking at the lack of adequate public transport in Indian cities, Ola and Uber have together promised an hefty investment of over $2.25 billion in India.

Uber reportedly plans to pump over $500 million by June in India. This is over and above the $1 billion already committed over the past nine months. That is some serious money.
Advertisement

Ola hasn’t been left wanting either. It has promised to add another 2,000 cars to its existing fleet of 26,000 in the nation’s capital. It is backed by the likes of SoftBank, and some of the most cash-rich VCs in the world.

However, Ola has been pulling out all its stock to go up against Uber. The company plans to launch WiFi services in the budget cab segment, and even its auto-rickshaws.

Some wonder how that's humanly possible at the current cost.

Advertisement
Legal Battles:
Interestingly, both taxi aggregators have been in legal wrangles.

A few months on, Uber recently sued Ola for allegedly creating 93,000 fake Uber accounts, and tampering its businesses. The company has been seeking around $7.4 million in damages.

Uber allegedly had to pay high cancellation charges to drivers due to this. It claims around 20,000 drivers quit the platform in frustration.
Advertisement

Accusations:
Both and have been accused of wrong-doing.

Recently, Paytm-backed online transportation app Jugnoo alleged Ola has adopted unethical practices against it. In a blog post, the company claims Ola employees made fake bookings, and tried to hamper its operations.

Jugnoo CEO Samar Singla has said his team saw a sudden surge in bookings and cancelations. According to him, around 20,000 cancelations were made through 800 accounts over a 10-day period earlier this month. In December, the auto-rickshaw aggregator had accused Ola of poaching employees and driver database in Chandigarh.

Advertisement
Uber has made similar claims against Ola. Ola spokesperson Anand Subramanian maintains this to be Uber’s way of ‘payback’ for the legal petition Ola filed, accusing Uber of flouting a Supreme Court order.

Interestingly, Uber’s rivals Lyft and Gett had in 2014 complained against the aggregator of making false bookings, and recruiting Lyft and Gett driver partners for its own service.

Experiments gone wrong:
In an attempt to find new battlegrounds, Ola and Uber both launched their bike-taxi services in India’s Bengaluru on the very same day.

It seems both knew of each other’s plans and neither wanted to be left behind. However, neither was fully ready. Several users claimed not a single was visible.

However, Ola was forced to roll back its service a few days later after the Karnataka state government said that India’s Motor Vehicle Act doesn’t have a provision for two wheelers to be used as taxis. Simply put, the bike taxi services were illegal.

When asked about the same, Ola COO Pranay Jivrajka refused to comment on the issue.

This isn’t the first time this has happened. As rival Uber was turning up the heat, Ola started experimenting with hyper-local food and grocery delivery.

It was later forced to shut these and focus on serving its core business. Although, it went on an overdrive, introducing new categories like Micro, Prime, a shuttle bus service and carpooling in a very short span.
Advertisement

Regulatory hassles:
While Uber has been facing regulatory hassles worldwide, and has the muscle to lobby for friendlier policies, Ola is still pretty new to such complications in business.

Recently, Indian state Karnataka stood firm on not allowing surge pricing for app-based ride hailing services such as Ola and Uber. In the state, online taxi aggregators operate as ride-hailing service under a license obtained under the Radio Taxi Scheme, 1988.

The policy says the charged fare cannot be higher than the fare fixed by the government. That means transport apps have to charge within a band where the upper limit is capped. Ola COO Pranay Jivrajka told BI the company's 'working together' with the state government to find a feasible solution.

Way back in August, in a major setback to Ola Cabs, the Delhi High Court dismissed its plea challenging a single-judge order upholding Delhi government's ban on such taxi services.

Advertisement
While Ola argued that non-app based taxi organizations also come under the Radio Taxi Scheme, and that Ola doesn’t own these vehicles anyway, the Delhi government had said the All India Tourist Permit (AITP) vehicles that operate under Ola brand are meant for tourist destinations and not point-to-point service in city.

Chest Thumping
Ola and Uber have both thrown around numbers that hardly make sense if put together.

In a recent interview, Ola’s Chief Marketing Officer and Head of Categories Raghuvesh Sarup said, "In three weeks, we have put up a category (Ola Micro) which is already 50% of all of Uber's daily bookings in the country. The rate at which Micro is growing, it will be larger than their entire brand within a month."

On the other hand, Eric Alexander, President of Uber's Asia business, in an interview said his company was on the verge of overtaking Ola in India. "In January last year, we were at five per cent market share. Now, we are right at the edge of 50 per cent. Within next 30 days, we would beat them (Ola). We will surpass them very, very shortly."
Advertisement

The statistics are even more confusing. Ola claims it holds 75% of the Indian app-based taxi-hailing market, with over 350,000 driver partners on its platform across the country, while Uber claims otherwise.

As the cut-throat fight between Uber and Ola continues, some say it’s reminiscent of Uber’s tussle with Lyft in the U.S. The two San Francisco-based rivals were constantly undercutting each other’s tariffs, poaching each other’s drivers and duplicating services.

Let’s just say its the same war, but with some Indian masala.