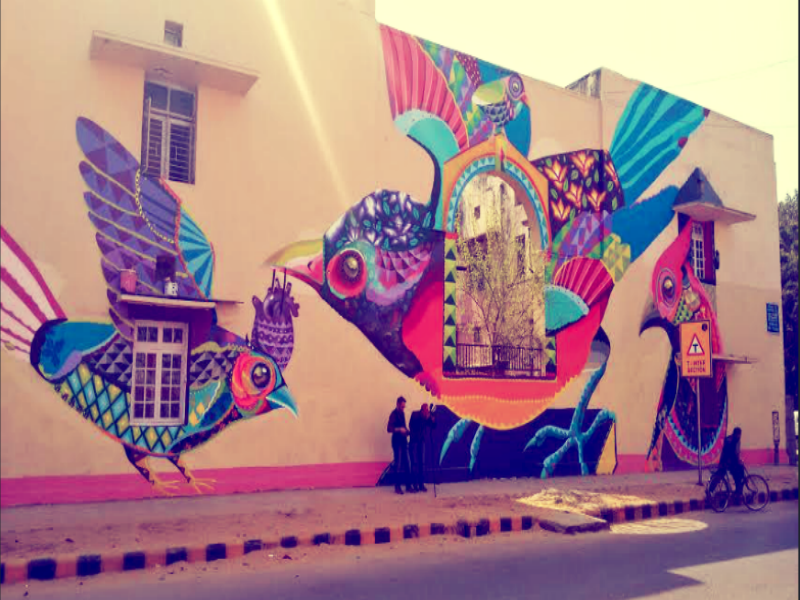 Gone are the days when art was limited to galleries, displayed only behind closed doors and walls were stained with paan, scribbles, urine, posters and lack of general apathy.

Now, tables have turned, all thanks to the St+Art Foundation, a non-profit organisation that works on art spaces in public spaces, which is hosting the Sr+Art Festival in the national capital for the second consecutive year.

This year, they aimed big. They wanted to embed art into the cities we live in- and what better city to start with than the national capital of the country itself?

So, the result is this- over 14 artists from and all across the world have come together to paint their heart out on walls and as a result creating India's very first open air public art district in .

Advertisement
Though the work that started in December 2015 is still in progress, presently several walls between Khanna Market and Meherchand Market are a spectacle lending themselves as an open air art gallery.

Prepare to be mesmerized when you cross Meherchand Market and end up noticing a mural of freedom fighter Rani Lakshmi Bai painted by Lady Aiko, a Japanese artist or catch yourself reading the painted poem on the walls of Lodhi in Block 11 written by the painter Neils Shoe Meulman himself. His calligraffiti will be hard to look away from.

It reads: Sans Serifs No Letters, And No Words To Read, Sans Words No Signs, No Names In The Streets, Just Rows Of Buildings, And Gardens Sans Weeds.

There will be more art adorning the walls as you pass by the Colony and while you pass each mural, remarkably different than the previous one, you will be forced to catch your breath for a moment-at the sheer brilliance of the work of these artists, most of whom have been successful in completing painting over a wall in under 4-5 days.

Their weapons of choice? Rollers, stencils, spray cans and last but not the least, their free hand.

Advertisement
Built on the foundation of the Swachh Bharat Mission, the initiative focuses on creatively spreading the message of maintaining a cleaner physical environment. “Art has the potential to create a positive impact on a city and its residents, while also paving the way towards making people more conscious about their environment. Through the creation of India’s first public art district, we hope to work with the government on more projects to create a sustainable approach towards the Swachh Bharat Mission,” says, Arjun Bahl, co-founder and festival director, St+Art India.

They are also conducting guided walks for anyone and everyone who wants to experience the magic of this open air gallery. Go for the walk, you won't regret it.

Infact, we went on one of the walks ourselves, and got you some exclusive pictures.

Be prepared to have your mind blown away!