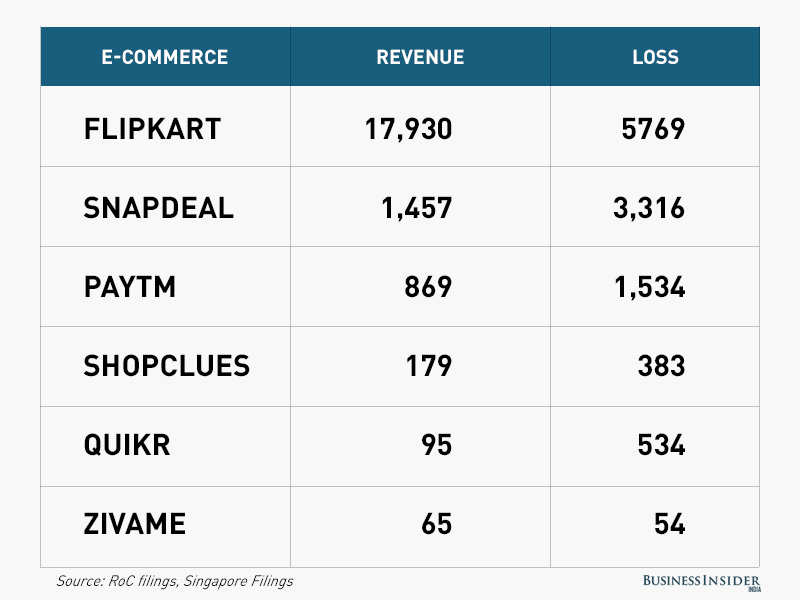 , the poster child of the Indian startup ecosystem, was devalued for the seventh time in January 2017, by .
At a $5.56 billion valuation, Flipkart&rsquo;s shares were valued at $52.13 in November 2016, down by 36.1 percent from $81.55 per share as of August 2016. The domino effect hit the cab aggregator next with the US-based investment firm marking down Ola by over 40 percent.

According to their regulatory filing with the , the current valuation for Ola is now $3 billion, with its shares dropping from $311.27 per share in the previous quarter to $182.70 apiece. During their peak, Ola had raised $500 million at a valuation of $5 billion.

That&rsquo;s not all. According to reports, e-commerce giant is reportedly looking at raising funds at a lower valuation of $4 billion. At their last fundraising round, they raised $200 million at a valuation of $6.5 billion.

Valuations are normally decided according to a company&rsquo;s market share, its gross margins, and its rate of growth, among other factors, but is anyone talking about the elephant in the room? Does a number decide a company&rsquo;s worth or does the mettle lie someplace else?
Advertisement

What&rsquo;s The Big Deal about Valuations?

While Valuations and devaluations are part of the game, they are a mix of market environment, risk appetite, a fund manager&rsquo;s biases, hot new trends, fear of missing out, the multiples comparable are commanding, and of course, expected cash flows and margins.
In 2015, we lauded the entry of Flipkart, Ola and Snapdeal in the Unicorn club. The first quarter of 2015 saw over $1.7 billion funding in start-ups and all we hear now are downturns with reality hitting the magic creatures to the ground and forcing them to compete in a horse race for fund-raising.

ALSO READ: Here's how Uber is letting you earn from its platform 'UberDost'

While there were muffled concerns of profitability and unit economics, the dynamics took a harder turn when in the middle of 2016 the world economic dynamics shifted.

Now the lauded valuations started to seem bloated and overhyped, and the cost-cutting started and it doesn&rsquo;t seem to end. 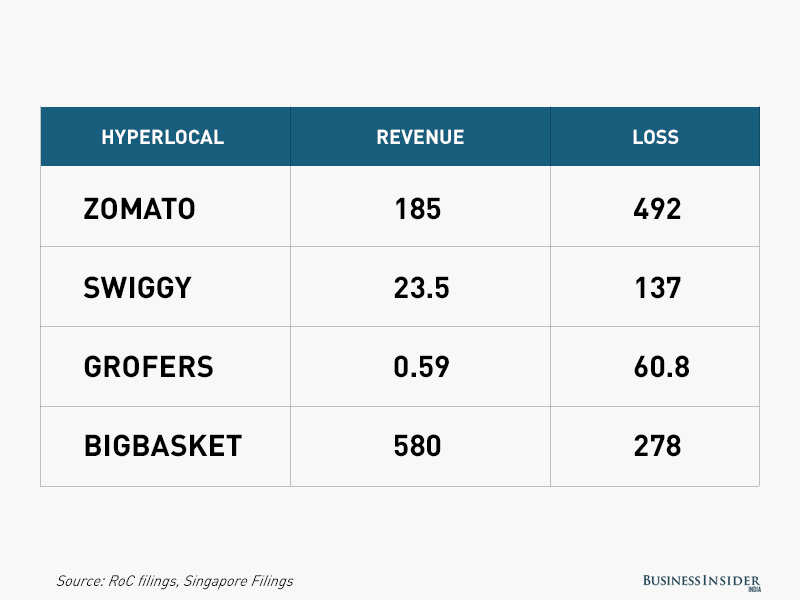 The secret is in the Business Model

, while digging deeper into factors ailing the startup ecosystem in India, realized that business models had to be one of the core ingredients to a startup&rsquo;s success or failure. So, we got in touch with key players, notable investors and successful companies that had a say in the functions of the industry.
Advertisement

What clearly emerged was that there were mainly three business models that most start-ups and unicorns, followed in India-

Now we break down the models to see why Indian start-ups think they&rsquo;d work and why they haven&rsquo;t succeeded yet.

, Co-Partner, Seedfund, one of India&rsquo;s most vocal investors told us what&rsquo;s wrong with the Indian startup ecosystem,&rdquo;The problem is that we are idolizing businesses that are not &lsquo;New&rsquo;. There is nothing elusive or different about the companies we look up to, they are just copycats.&rsquo;&rsquo;

Seedfund, which is an early stage VC firm has invested in companies like Redbus.in, Chumbak, Carwale, and Voonik. &ldquo;Real businesses need little or no marketing. The cost of acquiring a customer shouldn&rsquo;t be higher than your investment in your product which is what is happening right now&rsquo;&rsquo;Murthy comments on the viability of the business models of India&rsquo;s best-known .

&ldquo;Innovation for the sake of innovation is useless. Most consumers prefer the companies that are competitors to Flipkart, Snapdeal, and Ola and that speaks volumes. We are just looking for great service coupled with great value for money and and Uber give us that while the other companies don&rsquo;t hit the mark while getting celebrity endorsements with full-page ads.&rsquo;&rsquo;

from and now a VC says that as a VC, you should be able to put your money into a startup and walk away from your investment and at the most, you are best placed to understand a sector if you have built a business in it or at the very least, worked in it.
Advertisement
For Indian start-ups, we see the opposite happening with Flipkart who recently appointed as CEO, who is an ex-employee at Flipkart&rsquo;s key investor, Tiger Global.

What is a business model?

A business model explains which consumer pain a startup chooses to relieve, why your solution works better than competing ones and how big a wedge a company can drive between what customers are willing to pay and the costs.

Breaking down the Business Models

There are broadly the following business models at play when it comes to start-ups that hold the public eye in India:

Advertisement
1. Cut prices to gain an industry share and chase profit later: Target a huge market and sell a product at the lowest price with fast delivery and great service. As the company grows, expand the product line, negotiate volume discounts with suppliers, invest in technology, customer response time and cut waste from the operations. Then deliver the lower costs to customers in the form of lower prices.

This was Amazon&rsquo;s model which is still one of the fastest growing companies in India and the world. Although it was founded back in 1994, Amazon didn&rsquo;t actually make a profit until 2001. Amazon has some profitable projects, but the money made from them is typically used as investments to fund other Amazon businesses and ventures. The company invests its profits in new lines of businesses and uses them to expand. In short, Amazon seems to value growth over profits. 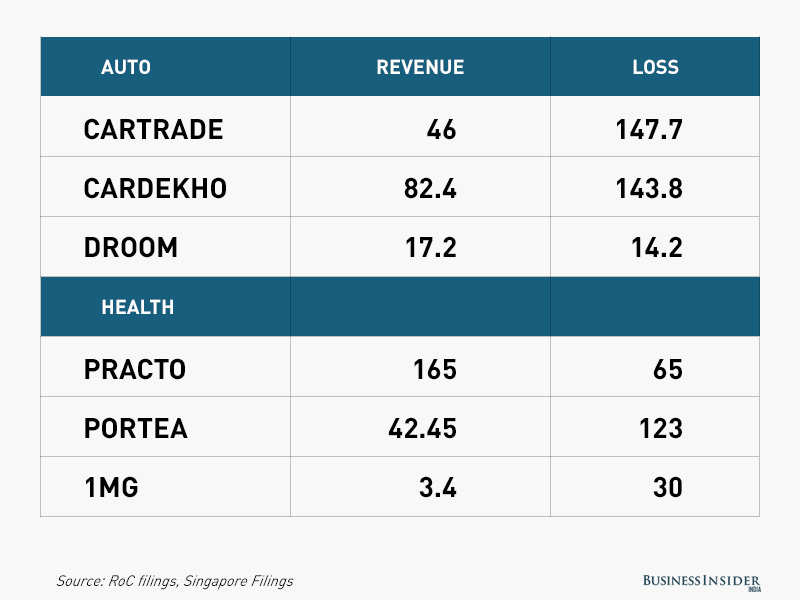 ​
Ruparel, President, Indian Angel Network doesn&rsquo;t believe in this model simply because she thinks that Indian consumers are flighty, &ldquo;There is a constant need to lure the consumer to stick with you which is tricky when you&rsquo;re not the only player in the market. Your focus here is on how quickly you can grow the market and not on your business strategy.&rsquo;&rsquo; believes in investing in a much more stable business model, &ldquo;We are old-fashioned for sure as our focus is on businesses building a top-line and a bottom-line. We ascertain a business by unit economics and even though the cycle might be slightly longer, B2B start-ups create a sustainable business.&rdquo;

&ldquo;The consumer is surely attuned to buying online which was their aim, but only some players will remain in this market. Consolidation is inevitable as loss-making businesses can&rsquo;t stay afloat for long, but only time will tell who will remain the top dogs here,&rsquo;&rsquo;says Padmaja when asked about the future for consumer-centric start-ups.
Advertisement

India&rsquo;s perspective: &ldquo;E-commerce companies like Snapdeal and Flipkart are following a similar model to that of Amazon in India. The difference is that Amazon can afford to lose money in India as it is profitable in other markets. The former players are just playing in India where they&rsquo;re losing money trying to compete with Amazon,&rdquo; comments Mahesh Murthy.

2. Set up person-to-person exchanges: A house owner in a town has a huge house that has idle rooms that aren&rsquo;t occupied. The young professionals living in the city need accommodation in different towns to work flexibly but they don&rsquo;t want to own a house or live in expensive hotels.
It seems to be working for which doesn&rsquo;t own any inventory and millions of people have taken advantage of these services, and Airbnb now has a market value estimated at $30 billion&mdash;roughly the same size as the hotel chain.

Vikram Gupta, CEO, IvyCap Ventures, &ldquo;India is not a mature market where you can write off $100 million checks to companies that are spearheaded by college graduates or in some cases, dropouts. The entire ecosystem is disturbed as new companies were getting funding at overhyped valuations. The market has started to finally stabilize and we see investors going back to the revenue as a yardstick for company&rsquo;s growth instead of the GMV. The businesses are coming back to realistic valuations and while they might have money left in the bank, they are looking to reduce their cash burn rate.&rdquo; 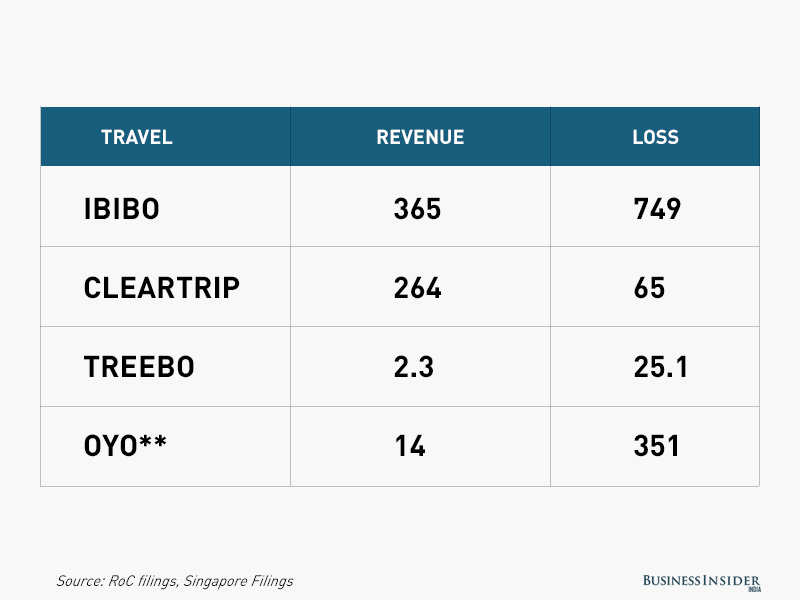 Advertisement
India&rsquo;s perspective: Companies like are trying to work with small hotels and guesthouses and have even leased their own properties but the burn-rate is consistent. With simplifying its business model and focusing on one aspect; people sharing their homes with people and minimal revamping, Airbnb has revolutionized how the world sees hotel accommodation forever.

3. On-Demand Model: Smartphones have driven transformational shifts in how we consume goods and services, and many consumers have become acclimated to purchasing at the press of a button. The on-demand model allows a startup to leverage new technology while utilizing existing infrastructures. Another benefit lies in the use of freelance labor with its obvious advantages in cost cutting.

Uber is a great example of the sharing economy where they connect the supply to the demand of taxis without investing in their own fleet.

India&rsquo;s perspective: is Uber&rsquo;s biggest competitor in India and while both companies burn a lot of money trying to lure customers to get into a taxi, Uber is currently the world&rsquo;s most valuable startup at $69 billion.

V. Krishnan, Co-founder, and Director of who likes to call his company an &lsquo;18-year old startup&rsquo; says that for a successful business you don&rsquo;t need an extraordinary idea, &ldquo;The problem with start-ups today is that they don&rsquo;t focus on profitability. To create a profitable business, you need extraordinary execution, not an idea. Giving money to people to use your services doesn&rsquo;t make sense. The Indian customers are not loyal to brands, but to offers. Our goal was to create a world-class business and a world-class company.&rsquo;&rsquo;

For the first ten years of JustDial&rsquo;s existence, the company didn&rsquo;t raise any funding. The company ran on a shoe-string budget and used its own money to survive. In 2006, when internet penetration and broadband gained traction in India, the company was ready with its fully functional website to complement its telecom services. From 2-3% internet users to now 85% internet users, the company has grown to 200 Cr web searches annually, without any cashback or incentives. The company is probably one of the rarely profitable internet companies in the country today.

ALSO READ: 65% of start-ups feel Indian startup eco-system may be in a tech bubble: Report

&ldquo;The core business of start-ups isn&rsquo;t ready but there is marketing happening. India is going to be giving you a lot of opportunities. Everyone wants to create a company, raise a great valuation and sell it off to do something bigger; the attitude is wrong,&quot; he signs off.
​
Advertisement
Business Insider got in touch with Flipkart, Ola, Snapdeal, and Uber for this story but the companies chose to not comment on the same. 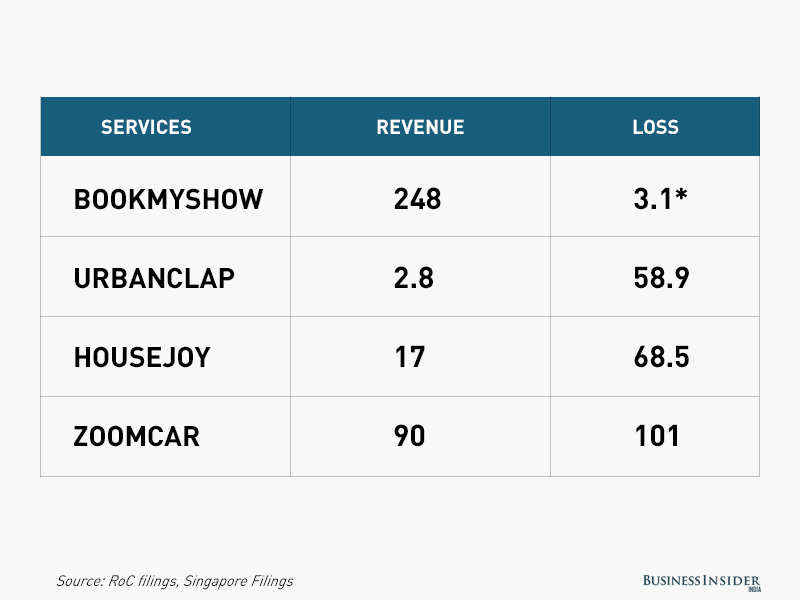 While popular Indian start-ups struggle to survive without additional funding coming in, we see some internet companies like JustDial and BookMyShow staying afloat, without investor-intervention.

When it comes to businesses and business models, investors and successful companies agree that the tried and tested works; build a business with a strong product that you can alter as technology develops. The business of losing money can only take you so far if you don&rsquo;t put it to good use.

Advertisement
There&rsquo;s a difference between investment into a product and burning money, and the start-ups better realize that before they get acquired or relinquished by the players who created the game that they&rsquo;re set to lose.

The market is big enough for companies that create value for customers not just for start-ups that create customers; the difference is everything.

(Graphics: All figures in INR crores for the financial year 2015- 2016. Source: Mint Research)

**For Oyo, the result is from Apr-Dec 2015.
*BookMyShow is the only company mentioned that has profits.