Advertisement
Sriram Iyer
Apr 3, 2020, 15:57 IST
The logo of Reliance Industries is pictured in a stall at the Vibrant Gujarat Global Trade Show at Gandhinagar, India, January 17, 2019. REUTERS/Amit Dave/File Photo
Advertisement
Reliance Industries Limited (RIL), owned by Asia's second-richest man Mukesh Ambani (whose net worth is nearly $40 billion), is looking to raise long-term debt at a time when it planned to cut the figure down to zero.
The board of directors of RIL, an oil to telecom to retail conglomerate with a market cap of over ₹6.8 lakh crore (nearly $90 billion), approved "the proposal for raising of funds through the issuance of non-convertible debentures (NCDs) up to ₹25,000 crore in tranches from time to time, on a private placement basis."

The company did not mention the purpose of the fundraising. The current coronavirus pandemic has indeed thrown up a huge challenge for the entire economy, and a potential cash crunch for all companies, and RIL is not immune to the shock.

Broking house Motilal Oswal had cut the company's estimated earnings for the financial year ending March 2021 by as much as 27% even before the company's plan to raise more debt. The stock has lost nearly 28% of its value this year so far.

What is a non-convertible debenture?

Non-convertible debentures is debt that cannot be converted into equity or stocks. They have a fixed maturity date and the interest can be paid along with the principal amount either monthly, quarterly, or annually depending on the fixed tenure specified. "They benefit investors with their supreme returns, liquidity, low risk and tax benefits when compared to that of convertible debentures," financial technology platform Cleartax explained.

This approval for raising more money through debt has come at a time when the company was supposed to move cut down the existing debt to zero by March 2021. Instead, the company has decided to raise long-term capital via NCDs.


Here's how the current lockdown to contain coronavirus will affect the company:

Advertisement
Given the current shutdown of retail stores (except grocery), Reliance Retail could see 4-5% revenue loss, Motilal Oswal said in a report adding that that the telecom venture, Reliance Jio, may see a limited drop in new subscriber
addition and physical recharges. However, this may offset by an increase in data consumption.

More importantly, the core business, refining and petrochemical sales, will take a much bigger hit than retail and telecom due to the COVID-19 lockdown. "The demand for both air and road transportation fuels has been drastically
affected, leading to fall in cracks of ATF (aviation turbine fuel), petrol and diesel," the report added.

Advertisement
Even worse, the increasing uncertainty has cast a shadow of doubt on the proposed deal between RIL and Saudi Arabia-owned Aramco. RIL had agreed to sell 20% stake for a whopping $15 billion ⁠— and this money would have gone into paring debt ⁠— but before the deal could materialise, the world economy has been thrown into disarray.

Meanwhile reports also suggest that Mark Zuckerberg's Facebook is interested in picking up a 10% stake in RIL's telecom unit Jio for $6 billion. In the meantime, Ambani has decided to raise more debt.

SEE ALSO:
Mukesh Ambani lost nearly half of his wealth due to coronavirus fears

Here’s a look at how Mukesh Ambani, Anand Mahindra, Kiran Mazumdar Shaw gave a shout out during Janata Curfew
Advertisement 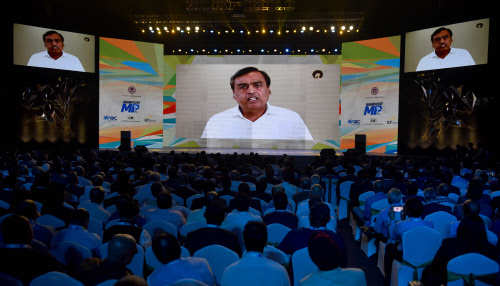