Dominance or development? What’s at the end of China’s New Silk Road?

Advertisement
SCMP
Apr 22, 2019, 10:36 IST
What might be the real purpose of the ‘Belt and Road Initiative’? Illustration: Lau Ka-kuen
By the entrance of the main office in Cambodia’s Sihanoukville is a crimson message from the country’s prime minister, Hun Sen.
Advertisement

Written in flowing Khmer and Mandarin is a quote from the China-friendly strongman likening the area to “my own son”.
On the opposite wall is a quote from Chinese President Xi Jinping hailing the zone – one of the first industrial estates in Asia funded and jointly run by Chinese investors – as a landmark model of cooperation.

The zone is home to dozens of Chinese firms and is just 12km (7 miles) from Cambodia’s only deep-sea port, a facility that was developed with the help of China’s strategic rival, Japan.

The port, which handles about 70 per cent of Cambodian imports and exports, is a major link in a chain of some 600 facilities in 200 countries connected by China’s “Belt and Road Initiative
”.China launched the scheme in 2015 to spur trade along ancient Silk Road land and sea routes linked to Asia, Africa and Europe.
Advertisement
Cambodia is one of the poorest and least developed countries in the world and has become a haven for Chinese investors, with capital inflows reaching an estimated US$3.9 billion last year.

The growth in investment in places like Cambodia comes despite mounting criticism and resistance, and underlines Beijing’s accelerated push for the world’s most ambitious project amid China’s economic wrangling with the United States and European powers and their unfolding geopolitical rivalry.


Those ambitions will be in the spotlight this week when 37 heads of state, including Hun Sen and Russian President Vladimir Putin, head to Beijing for the Belt and Road Forum, the second of its kind in less than two years. But neither India nor the US will send senior representatives.

Observers say the event is aimed at both domestic and foreign audiences, with Beijing keen to showcase the popularity of Xi’s foreign policy and gauge the level of interest and commitment among participants in the project.


But there is also expected to be much questioning and scrutiny of China’s global ambitions. While Beijing wants to convince the world of its peaceful rise and its desire to promote regional connectivity and growth in Eurasia and Africa by using government capital, state-owned enterprises and projects abroad, it still has a lot of explaining to do.


“A significant part of the Belt and Road Initiative is projecting the rejuvenation of China inherent in Xi’s ‘Chinese dream’,” Steve Tsang, director of the SOAS China Institute at the University of ’s School of Oriental and African Studies, said. “It is not about solving the world’s problems but about making Xi’s China appear great and successful.”

The big picture
Advertisement
When Xi first proposed the belt and road six years ago, he said it was a vision for greater connectivity and trade along an economic land belt and maritime routes linking China to Africa and the Mediterranean, reminiscent of the ancient Silk Road centuries ago.

In a speech at Kazakhstan’s Nazarbayev University in September 2013, Xi said the idea would be to “build a community of interests” by deepening economic ties, cooperation and development between Eurasian countries.

Two years later, he said the initiative would be “a real chorus comprising all countries along the routes, not a solo for China itself”.

At the first Belt and Road Forum in 2017, billed as the country’s most important diplomatic event of the year, Xi waxed poetically about the ancient Silk Road routes as a “great heritage of human civilisation”. He spoke about how its modern version, the belt and road programme, would complement different countries’ development strategies rather than “reinvent the wheel”. At the time, more than 100 countries and international organisations had signalled they were on board with the plan.The approach is not entirely new and is often compared to the US’ post-second world war Marshall Plan and Japan’s “flying geese” development strategy in Southeast Asia in the 1990s.

Advertisement
Over the years, the initiative has evolved and deepened into a much more comprehensive strategy, becoming the centrepiece of Xi’s economic and foreign policy, which is aimed at transforming Beijing into an international leader on a par with Washington and reclaiming its greatness on the world stage. The initiative was also enshrined in the Communist Party’s constitution in 2017 along with Xi’s eponymous political thinking.


According to Beijing’s top diplomat Yang Jiechi
, a Politburo member and former foreign minister, more than 120 countries in Asia, Europe, Africa, Latin America and the Caribbean have signed on to the plan.Diplomats, officials and observers say that the evolution of the initiative, which is still to be thoroughly deliberated and clarified, coincides with a fast-changing global economic and political order, including the rise of China, further integration of Europe and Asia, and the decline of American hegemony.

Moritz Pieper, a lecturer in international relations at the University of Salford in Britain, said that no matter what is the main driving force behind the initiative, China is growing as a power in Eurasia.

Advertisement
“Regardless of whether one subscribes to the view that it [the belt and road] is driven first and foremost by Chinese domestic economic motivations such as industrial excess capacity or to the view that China aims to ‘go out’ and make a distinctive contribution to globalisation on Chinese terms, there can be no doubt that China has arisen as a Eurasian power as a precondition for global ‘great power’ status,” Pieper said.Yun Sun, co-director of the East Asia programme at the Stimson Centre think tank, said the belt and road served both economic and strategic goals.

“It helps China to absorb domestic economic overcapacity; expand foreign markets and trade relations; consolidate political relations with recipient countries; further military ties and security influence; and eventually all these serve to shape a different order with China playing a much more prominent role,” she said.

As China has continued to expand its presence in some of the world’s busiest and strategically important trade arteries in the past two years, the US, Japan, Germany, Russia, India, Australia and other governments have fretted that Beijing is gaining economic and political influence at their expense.


Many of the countries that have signed up for the initiative are less-developed economies in Africa and the Asia-Pacific as well as struggling parts of Europe, and “in today’s global economic conditions money talks”, according to Gal Luft, co-director of the Washington-based Institute for the Analysis of Global Security.
Advertisement
“Many developing countries as well as struggling European economies like Italy and Greece are in financial dire straits,” Luft said.

“The IMF and the World Bank are no longer viewed as the salvation. China is the only country that is willing to offer tangible resources and with almost no strings attached. Washington on the other hand is all threats and criticisms and very low on actual deliverables.”

Italy signs up for belt and road infrastructure forum in China

Joshua Meservey, an expert on Africa and the Middle East at the Heritage Foundation in Washington, said Beijing aimed to translate that influence into something bigger.


“I think Beijing does see Africa [and other underdeveloped continents] as very important to its overall foreign policy goals which are intimately linked to its domestic policy goals of maintaining its rule,” he said.
Advertisement

“The Chinese Communist Party wants the world to adopt its model of internet governance and sovereignty. But what they’re really talking about is the government’s ability to control and censor and repress the internet as CCP does in mainland China … It is just one example of how they explicitly promote the illiberal global norms especially among developing countries. Developing countries are very much the junior partners to China and so are somewhat at China’s mercy on these questions.”


Suspicions of Chinese geostrategic intentions have seen other countries invest more deeply in their rival investment or connectivity initiatives: the European Union moved to expand the bloc’s Europe-Asia connectivity plan, Russia pushed forward the Eurasian Economic Union, and the United States led the creation of an Indo-Pacific infrastructure investment partnership with Australia and Japan, which India was in talks to join. 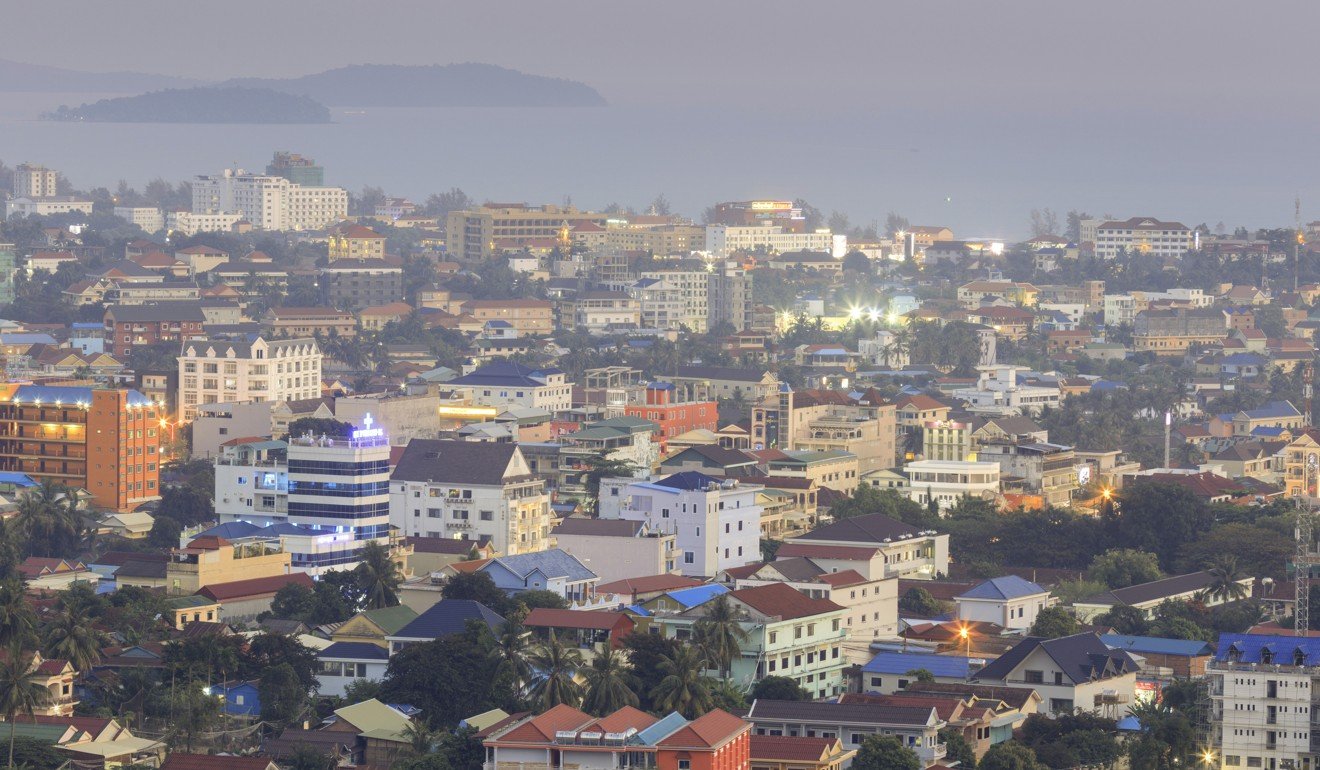 China and Japan are vying for influence in the Cambodian city of Sihanoukville. Photo: Alamy
Advertisement
Even in Cambodia, China has a fierce competitor: Japan, which is vigorously vying for influence in the once sleepy seaside city of Sihanoukville and across the underdeveloped nation. Japan is Cambodia’s second-biggest overseas investor, with US$889 million invested in eight major projects, according to the Council for the Development of Cambodia.


Chansok Lak, lecturer and researcher at the Royal University of Phnom Penh, said a marked increase in Japanese investment in Cambodia since 2017 might reflect Tokyo’s efforts to counterbalance Chinese influence in the country.


Many researchers say that the increasing integration of Europe and Asia looks set to reshape the global economic and political order, replacing the dominating transatlantic routes in world trade.

Advertisement
According to Nicholas Moes at Bruegel, a Brussels-based think tank, Eurasia trade in goods, which peaked at US$1.8 trillion in 2013, is consistently more than double the transatlantic trade in the past decade.


The world’s political and economic centre of gravity is shifting from West to East, claimed Marcaes, the author of The Dawn of Eurasia and Belt and Road: A Chinese World Order, both published in 2018, with the emergence of a Eurasia century in the midst of a fast-changing world order.


According to a report by Dutch multinational bank ING last year, trade between Asia and Europe (excluding trade between EU countries) accounted for 28 per cent of world trade. Making trade flows easier between countries along the belt and road corridors, especially those in Central and Eastern Europe, the Middle East and Southeast Asia, could boost international trade by as much as 12 per cent.
Advertisement
{{}}
NewsletterSIMPLY PUT - where we join the dots to inform and inspire you. Sign up for a weekly brief collating many news items into one untangled thought delivered straight to your mailbox.
CAPTCHA: