Exclusive: Nandan Nilekani says the trick for fast-paced growth in India is to combine the scale of the govt with the speed of startups 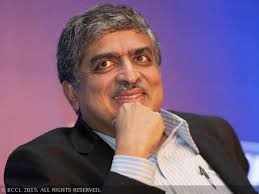 , the Infosys czar and the creator is of the belief that India is on the cusp of an enormous financial revolution if it takes the path of being a cashless and as a result corruption-free economy. In his new book, ‘’, which he co-authored with , they enumerate 12 big challenges for the Indian government and chart out a roadmap to achieve them, using their experience during Aadhar.

TOP VIDEOS FOR YOU
In an exclusive interview, Nilekani sheds some light on our queries regarding if it's ingfact possible for India to reboot itself.

Advertisement
Your book talks about the importance of an entrepreneurial spirit as one of the two things required to keep an organization running. From your experience in Aadhar, what tips can you give the bureaucracy to hone their entrepreneurial skills?

In Rebooting India, my co-author Viral Shah and I discuss the importance of running projects as startups within government to address some of our toughest grand challenges. We also note that the government at large is designed for stability rather than for the latest innovations and fads. The trick is to combine the scale of government with the speed of startups. In our book, we use this infographic to illustrate how this can be done. We feel that our book and experiences can serve as a guide for bureaucrats wanting to hone their entrepreneurial skills. 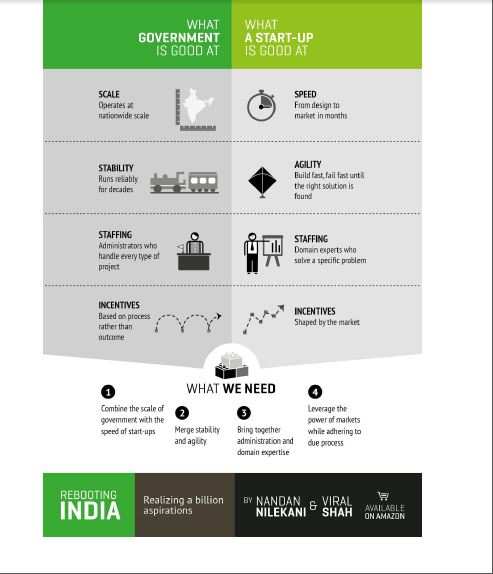 Advertisement
Why is our country still grappling with the mere basics despite their being talented people in the government?

The challenge of our country is its vast scale and diversity. In our Introductory
chapter, Viral and I write:

“Indian society is vastly complex, made up of a million smaller Indias—rich, poor, urban, rural, multiethnic, multilingual. A truly democratic society is one in which every citizen of these million smaller Indias’ is included in the mainstream, able to benefit from government services and participate in the country’s development. We need to fix our country’s problems at great speed, at scale, with high quality, while providing solutions that are easy to access, independent of geography, and low cost. Technology, the great leveller, is our only hope of meeting these goals.”
Advertisement

While government is staffed with able administrators, only through technology can we solve our problems at speed and scale. That is only possible by leveraging the diverse experiences and capabilities from the private sector. This would bring a missing skill in government thinking about products, operating in a competitive scenario, understanding the mind of the customer, etc. 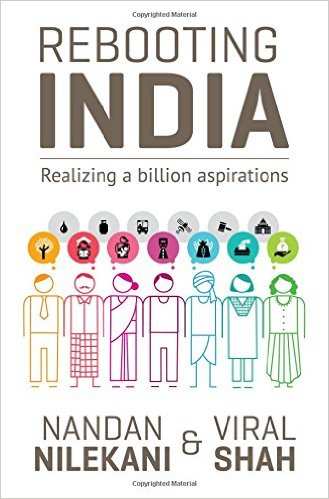 In your book, you ’ ve also stressed on the fact that it ’ s imperative that Indian banking must switch to electronic payment system while highlighting its advantages. Do you think India, as a country, where the majority of the population is in the rural areas, will be ready for this? How do we make them ready for this?
Advertisement

Ofcourse. Today, hundreds of millions of Indians are doing 5 rupees worth of top-ups regularly to recharge their phone. Putting money in the bank account is no different! Hand over cash for deposit, and get an SMS with your current balance. India is already ready for this. That is why in our chapter on payments, we outline a vision of a million business correspondents who can provide banking service to the last mile using their smartphones and Aadhaar. This is not theoretical, but can be rolled out in a matter of months. The technology is ready and reviewed by the Reserve Bank; over 90 crore people have Aadhaar, and the banks have already integrated and tested the MicroATM systems.

Technology is another aspect that you ’ re talking about in detail in your b ook- something that you believe could solve our problems at a lightning speed. However, how well do you think the government and the people are well-versed with technology to carry it forward? What happens when a new government comes in?

Since government is designed for stability, a technology project once well designed is suitable for the system to keep running and maintaining it. That is where Aadhaar is. Through the use of APIs authentication, eKYC, payments, etc., innovation is now being carried out by others on top of the Aadhaar platform. This is the role of government provide public goods and let the markets compete. Once a project is successful and has achieved scale and proven its benefit, why would a new government change anything? Clearly, Aadhaar was initiated in the UPA 2 government and is being scaled countrywide in the current government. Similarly, LPG subsidy was initiated in the earlier government, but scaled up by the current government under the name of Pahal.
Advertisement

According to you, what should be the three immediate steps of the government to try and reboot India?

In our book, we outline the need for technology to fundamentally reshape thinking and business processes. Thus, e-governance or putting websites is not sufficient. Just like Uber and Ola redefined the taxi business, we need to do the same in the government. We have outlined 12 such projects, of which 2 have been completed (Aadhaar and Pahal) and the ideas can be applied to 10 more projects eKYC, payments, health, education, justice, transparent government expenditure, etc. Each of these projects can be implemented by startups within government 10 teams of 10 people from government and private sector, each led by an entrepreneurial leader, working under the prime minister.

Leafing through your book, it’s impossible to not notice the infographics adorning the pages after frequent intervals, which obviously make reading the book a more enjoyable experience. Whose idea was it to come up with the illustrations?
Advertisement

We felt that the illustrations would help make the content more accessible. The purpose we wrote this book was to put the ideas in the public domain so that they would capture the imagination of the people, and infographics such as those in the book make it easy to do.

The illustrations were done by a talented artist Aparna Ranjan. Swapnika
Ramu carried out the research and shaped the prose in the book to be a lot more readable. This really was a team effort!