Exclusive: What moms want from the Budget 2017 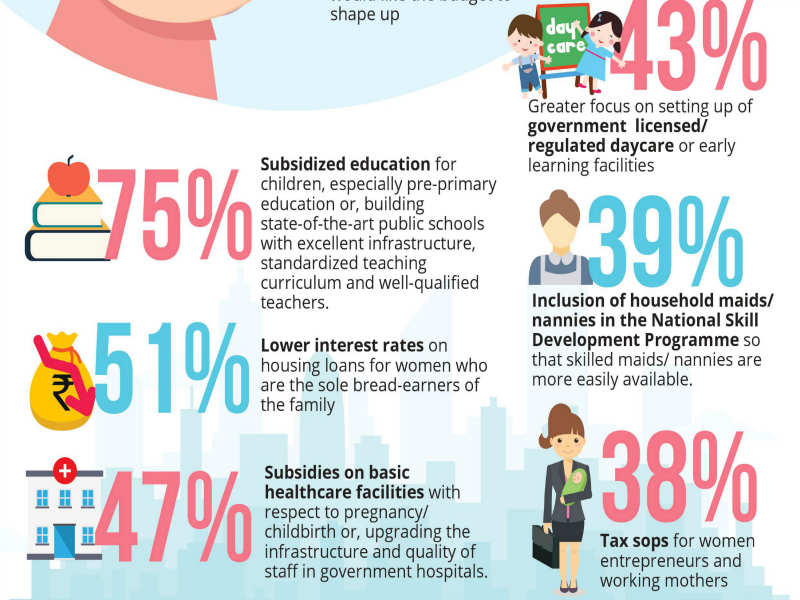 Budget 2017 is going to be crucial, not just for businesses but also for every citizen as our lives become more fruitful or expensive as the budget is announced in a few days.

The direct or indirect consequence of the budget will be on Moms, and as they constitute a major and most influential portion of our population, it is important that their voice is heard. make critical financial decisions for their family, especially related to child care. These decisions impact the future - their own and that of their children and families.

Ahead of the 2017 budget session, conducted a pre-budget survey and asked them how the Budget 2017 could help them. Nearly 1000 moms participated in this survey.

The BabyChakra survey clearly showed a tilt in favor of education.

Advertisement
Understandably so, in view of the future generation, the moms are raising. This was followed by health and housing related benefits, in that order.

An important reflection was on the need for social and public infrastructure for mothers and their babies.

For instance, public spaces need to have designated places for breastfeeding, unlike inside restrooms, as they are today. Even changing diapers or carrying babies on strollers is a challenge due to lack of adequate facilities.

The need for trained nannies and housemaids is a quintessential requirement of an urban mom today. This sector is largely unorganized and finding reliable resources is rather tough.

Some initiatives to train maids or upskill them would be beneficial for both the employers and the maids.

An interesting thought emerged with regard to the recent amendment to the Maternity Benefit Act wherein the government mandates every company having more than 50 women employees to have a nursery facility.

Moms who participated in the survey felt that this amendment would be more effective if companies were incentivized for setting up this facility for their parent employees. The absence of such initiatives may demotivate employers from hiring women/ mothers.

ALSO READ: India vs. the US : Healthcare industry

Advertisement
There's also a distinct trend among urban moms to go the entrepreneurial way.Government initiatives can help them to start their business and sustain better.

Safety rules the roost on all fronts when it comes to women and budget is no exception. Adequate policing and security infrastructure would probably help moms and their babies safer to even travel alone.