Here's what happened in Internet of Things this week

IoT TECHNOLOGIES WILL CREATE AT LEAST $3.9 TRILLION IN ECONOMIC VALUE BY 2025: A new report from research firm McKinsey projects that IoT technologies will have an economic impact between $3.9 trillion and $11.1 trillion by 2025.

That gulf in the potential value that McKinsey forecasted is because of the variety of factors that could play into the IoT's economic impact. For instance, 40% of the potential economic value of IoT technologies (about $4 trillion) can only be realized if the issue of interoperability - enabling different IoT devices from different providers to communicate and share data - is resolved, McKinsey said. There are several different standards for interoperability being developed by different companies and consortiums, but no universal standard has emerged that would create that value.

Another major issue that will determine how much economic value is realized from the IoT is the ability to collect, aggregate, and analyze data from various IoT devices and systems, according to the report. The vast majority of the data coming from IoT devices and systems is not collected at all today, and the data that is gathered isn't fully exploited, McKinsey said. For example, McKinsey found that only one percent of the data being generated from the 30,000 sensors on one offshore oilrig was being analyzed for decisions. The more data
that is captured and analyzed from IoT technologies, the more economic value will be created.

The areas where the IoT will have the greatest potential economic impact will be in manufacturing, cities, and healthcare, according to the report. Manufacturing accounted for about a quarter of McKinsey's overall estimates for economic impact, with the sector creating between $1.2 trillion and $3.7 trillion in value from the adoption of IoT. Cities will gain between $900 billion and $1.7 trillion dollars in value, and the healthcare sector will have an impact between $200 billion and $1.6 trillion.

BI Intelligence estimates that the adoption of IoT technologies will have an economic impact of $1.7 trillion by 2019.

This story originally appeared in this week's IoT WEEKENDER, a weekly collection of our favorite payments news by BI Intelligence, a premium research service from Business Insider. Learn more about our FREE trial now »

FORD'S 3-D PRINTING PARTNERSHIP: Ford is partnering with 3-D printing startup Carbon3D to build personalized car parts for customers. For instance, a new customer could have a steering wheel molded to specifically fit their hand.

Carbon3D has raised $51 million in funding and uses a 3D printing technology that can make materials that are harder and more durable than most 3D printers, which make objects layer by layer, like a printer prints ink. However, that makes the objects easy to break apart at the seams in between the layers with a chisel or screwdriver. Carbon3D's printer creates objects out of a special formula of resins that are hardened by controlled access to light and oxygen.

That durability drew Ford's interest in the company. Right now 3D printing isn't fast enough to create parts needed for mass manufacturing of cars, but it could be used to make the customizable parts that Ford is interested in making with Carbon3D.

SIX MEASURES FOR IoT DEVICE SECURITY: BII estimates that by 2020 there will be more than 23 billion IoT devices connected to the internet. One of the biggest challenges in connecting so many devices will be in securing them to prevent hackers from controlling them or using them to infiltrate networks and databases. Many low-power IoT devices don't have the computing power to run antivirus software like a computer. A recent blog post on EETimes discussed six measures that can be used to protect IoT devices from hackers:

BI Intelligence estimates that spending on security for IoT devices and systems will increase fivefold from 2015 to 2019.

AMAZON ECHO NOW AVAILABLE FOR PURCHASE: Amazon announced yesterday that its Echo smart home assistant and voice-controlled speaker would go on sale to the public on July 14 for $179. The device had previously only been available by invitation to select Amazon customers. The Echo had previously been priced at $99 for Amazon prime members, and $199 for non-prime members.

The Echo is Amazon's answer to the smart home hub. It can control smart lights and switches from Philips Hue and WeMo, so users can adjust their lights with voice commands. It can also play music from Pandora and Amazon Prime Music, make Amazon orders by voice command, and provide voice alerts for news and weather updates.

3D ROBOTICS AIMS TO BREAK DJI'S DOMINANCE IN CONSUMER DRONE MARKET: China-based DJI accounts for 70% of the small but fast-growing consumer drone market. The company made $500 million last year, and expects to revenues to top $1 billion this year. But rival drone maker 3D Robotics, which is based in Berkley, CA, aims to take on DJI's dominance of the market. 3D Robotics' new Solo drones for consumers, released last week, will be sold at Best Buy's stores and on its website.
Advertisement

The Solo drones feature more onboard computing power than DJI's new Phantom 3 drones, making them easier to fly. They also have an open software architecture that will allow different cameras, sensors, software, and applications to be integrated with the drones.

That open architecture could appeal to enterprises looking to buy drones for commercial use and then customize them with different hardware or software for specific tasks. The use of commercial drones in the US has been limited by FAA regulations, but the FAA has been granting exemptions in cases where drones can complete tasks that would be dangerous for humans, like inspecting oil rigs or damaged houses. BII still expects military drones to make up the bulk of drones shipped through 2024.

The tractors feature a satellite guidance system and touchscreen interface, and customers can purchase additional software modules, like auto-steering. Self-driving tractors can costs as much as $20,000 more than the standard variety. 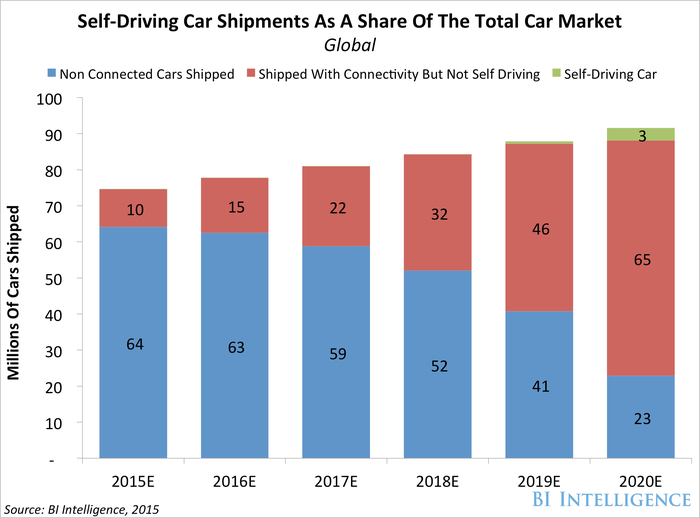 The extra cost is worth it for some farmers, since the self-driving technology allows the tractor to make more precise turns, so it can cover a field in less time with fewer passes. That extra time is valuable for US farmers, who are facing a labor shortage right now as young people from rural areas flock to cities. John Deere says that a driver is still supposed to be behind the wheel of its self-driving tractors, but The Washington Post's story shares some examples of farmers letting the tractors drive themselves while they do other things.
Advertisement

Find this article interesting? Thousands of professionals just like you had it in their inbox first. Stay ahead of the curve and gain a comprehensive understanding of the latest news & trends. Start your day with the IoT INSIDER. Try it FREE now »