The 2011 round of the bank’s International Comparison Program (ICP) ranked India after the US and China. The last survey in 2005 had placed the country on 10th place.

PPP is used to compare economies and incomes of people by adjusting for differences in prices in different countries to make a meaningful comparison.
India’s share in in terms of PPP was 6.4% in 2011 compared with China’s 14.9% and the US’ 17.1%, the latest ICP showed. The survey covered 199 economies.
“The United States remained the world’s largest economy, but it was closely followed by China when measured using PPPs. India was now the world’s third largest economy, moving ahead of Japan,” the report said.

Despite high inflation in India in recent years, prices in the country are still well below those in advanced economies, explaining the higher raking for India on the PPP measure. But according to the (IMF), India’s economy is 12th largest and only about a third of Japan’s in terms of absolute unadjusted dollars. “The economies with the lowest prices are either in Africa or Asia and the Pacific and include India, which has the third-largest economy,” the report noted.

Advertisement
“Because economies estimate their at national price levels and in national currencies, those GDPs are not comparable. To be compared, they must be valued at a common price level and expressed in a common currency,” the report said, giving out the rationale for the PPP adjustments. 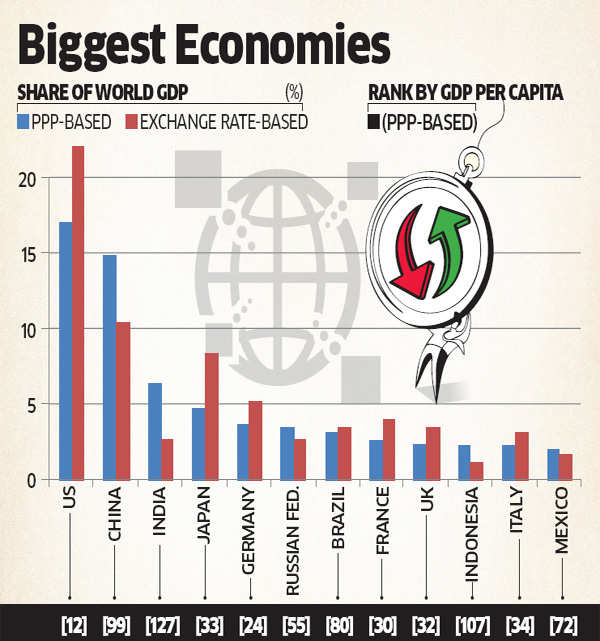 This makes it a good tool to compare poverty levels across countries.

“One major use of PPPs is poverty assessment using the World Bank’s international poverty threshold of $1.25 per day per person. National poverty assessments differ because the purchasing power of national currencies differs from one economy to another,” the report said.
In terms of per capita GDP, even in PPP terms, India ranks very low at 127 in the 199-country ranking.
Advertisement

“The largest economies were not the richest, as shown in the ranking of GDP per capita. The middle-in­come economies with large economies also had large populations, setting the stage for continued growth,” the report noted.

In the latest ranking, India’s economy was 37.1% of the US economy compared with 18.9% in 2005.
The report said in terms of spending power, the differences have come down.

“The spread of per capita actual individual consumption as a percentage of that of the United States has been greatly reduced, suggesting that the world has become more equal,” it said but cautioned some of this could be due to changes in the methodology.
NewsletterSIMPLY PUT - where we join the dots to inform and inspire you. Sign up for a weekly brief collating many news items into one untangled thought delivered straight to your mailbox.
CAPTCHA: