Dollar bills made of gold, grains as currency⁠, and a new reserve bank— Indian godman Nithyananda’s promises for believers of Kailaasa


There is no authoritative account of his actual location but Nithyananda continues to release videos making bizarre promises. His sudden mysterious disappearance from India should have cast doubt on the authorities conducting the probe. Despite the seriousness of the charges against, Nithyananda’s antics cause more laughter than a social stir.


The new central bank will dictate the country’s economic policies and print ‘Kailaasian dollars’ in gold. One dollar will have one tola — 11.66 grams — of gold. And, the dollar will be printed in 25 different designs to reflect the legacy of past Hindu nations. “In Hinduism, gold is not only valued — it’s sacred. All currencies will only be printed in pure gold,” Nithyananda said during a video address.


Similarly, there will be two-dollar notes in thirty-odd designs and quarters in 10 different variations as well. However, gold is not the store of wealth valued in Hinduism, according to Nithyananda. Grains, precious gems, and other precious metals will also be a part of Kailaasa’s new monetary system.
Advertisement

“Hinduism considers grains to be a store of wealth. Grains will be used for the barter system,” he explained.

Hindu Reserve Bank of Kailaasa will be based on the Vatican Bank
When Nithyananda first fled from India on rape charges, nobody thought he would one day be setting up a central bank for a country that he bought which has its own passport, flag and emblem.

On its website, 'Kailaasa' is described as the greatest Hindu nation on earth. The government of the new nation even has various departments like homeland security, defence, education and so on.


The upcoming central bank will be based on the Vatican Bank’s architecture known to be one of the most secretive in the world.

Advertisement
However, Nithyananda wants to introduce one little twist — decentralised ownership using cryptocurrency. According to him, this will build trust and transparency. Others argue that this could open up the doors to money laundering.

The bank’s policies will be based on vedas and agamas — considered to be holy scriptures of the highest authority in Hinduism. “Everything I’m trying to revive and make them legitimate functional systems,” said Nithyananda.

He is the same man who said he will create a way to transfer wealth for people from one birth to another. Here’s the video that went viral: 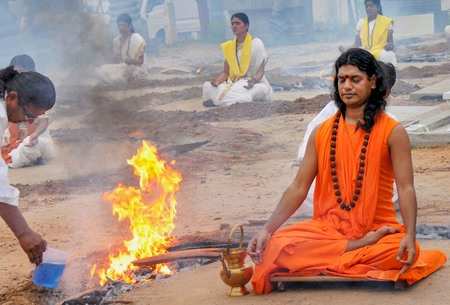