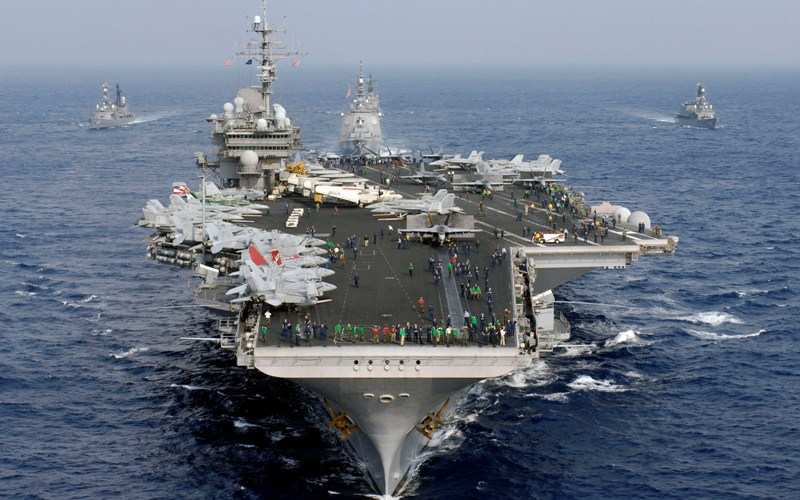 Once India's former Prime Minister Jawaharlal Nehru had said “To be safe on land, we must be supreme at sea”. Much has been said about the Indian Navy's blue water aspirations over time. However a number of experts have already described the as being a blue-water navy and the intentions of developing blue-water capabilities were outlined under the 2007 Maritime Capabilities Perspective Plan . In the recent times India has built one of the largest and most powerful navies in the world with an indication towards major possibilities of further growth. It has 2 conventional Aircraft carriers, 1 amphibious transport dock, 50 Frigates, Destroyers and Corvettes one nuclear-powered and14 conventionally-powered attack submarines and a many other naval ships including around 100 armed patrol ships with the Indian Coast Guards.
Advertisement

Why Blue Water Capabilities?
Ability to operate across the deep waters of open oceans along with the maritime expeditionary capabilities is required to be a . Blue Water capability is required to project the power of India’s area of strategic interest in the . It is marked by the increased presence of the Indian Navy in the Persian Gulf and the Horn of Africa to the Strait of Malacca, and it also conducts anti-piracy operations and partnership building exercises with other major navies in the region.

Blue water capability is necessary to shift the balance of power to an extent in India's favor and is also fueled by Beijing's “String of Pearls” strategy in the Indian Ocean. China's intention in building of maritime facilities in Sri Lanka, Pakistan, Bangladesh and Myanmar can be seen as an encirclement in the Indian ocean which can have serious outcomes in the coming future. True Blue Water capabilities not only protect India's own territory but also enables to project power beyond it.

The Nuclear Triad
Delivery of a nuclear arsenal through strategic bombers, Intercontinental Ballistic Missiles (ICBMs), and submarine launched ballistic missiles (SLBMs) is termed as a nuclear triad. The purpose of having a nuclear triad is to increase the second strike capability and the nuclear deterrence. A three-branched nuclear capability significantly reduces the possibility that an enemy could destroy all of a nation's nuclear forces in a first-strike attack. India maintains a no first use nuclear policy as a part of its credible minimum deterrence doctrine.

Advertisement
India has surface-to-air and surface-to-surface missiles such as Agni missile system with a range of 5000-8000kms which can be tipped with the nuclear warheads and forms the land based part of the nuclear triad. It can deliver nuclear warheads through air with the help of strategic bombers like Jaguars, SU-30MKI and Dassault Mirage 2000H. India operates a nuclear-powered missile submarine, which is capable of launching nuclear capable K- family missiles like Sagarika and K-4 which has a range up to 5000kms. Once deployed in 2016 India will complete its nuclear triad to be a true Blue Water Navy.

Area of Thrust and the future
India has transformed itself into a self-sufficient navy and the future lies in developing platforms, systems, sensors and weapons as part of the nation's modernization and expansion plan. As of now the Indian Navy has around 45 vessels of various types under construction including; an aircraft carrier, destroyers, frigates, corvettes, conventional and nuclear-powered submarines.

Indian navy operates two carrier task forces centered on and . India needs at least 5 more aircraft-carriers out of which 3 should be nuclear-powered with a capacity of having 60-70 fixed winged aircrafts on it. Dependency on MIG-29K for its carrier can be understood for now but India should also look and invest in a new indigenously developed carrier based fighter so that it can move from STOBAR to CATOBAR system and that fighter should have an extended range of around 3500kms. The road ahead for the Indian Navy's true Blue Water aspiration requires time-bound completions and proper policy framework.