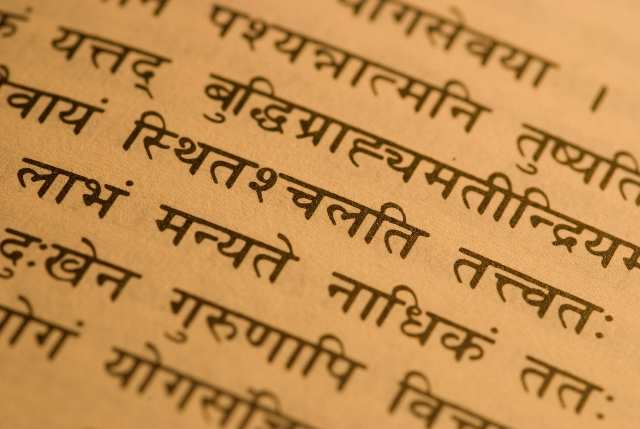 , a Sanskrit daily that was launched way back in 1970 in Mysore by the scholar Kalale Nadadur Pandit Varadaraja Iyenger with the aim of ensuring that Sanskrit, considered to be the primary sacred language of the Hindu, reaches the masses.

For 40 years, its editor K.V , the son of Varadaraja Iyenger kept the paper running because of his two passions- journalism and love for the sacred language. Incidentally, Sudharma is also the world’s only Sanskit newspaper.

The Karnataka based paper which boasts of 3000 subscribers is a favourite with Sanskrit vidyapeeths, academic institutions and also public state libraries in cities such as Kerala, Assam, Karnataka, Jammu and Kashmir, Tamil Nadu etc. A few readers from countries such as U.S and Japan also subscribe to this newspaper.

Dispatched mainly through post, the daily sells around 2,000 copies. To keep up with the times, an e-paper was also launched a few years back, which ensured that the daily’s readership shot upto 1.5 lakh.

Advertisement
To help people reconnect with the language, the newspaper also comes out with yearly calendars and a magazine which comprises informative articles and analysis by Sanskrit scholars.

They have also published more than 100 books in Sanskrit that include stories for children, detective stories and basic Sanskrit learning. All these books are priced well under Rs 100.

As a result, Sudharma can also be credited with helping a lot of people hone their language skills.

At a time of increasing costs, a yearly subscription of this newspaper costs barely Rs 400. The modest price was so that each and everyone had the opportunity to learn basic Sanskrit if they wished to.

The profit gained by the newspaper is negligible but that is hardly enough for Kumar to discontinue the newspaper. He atkes up odd printing jobs to make the money required to sustain the newspaper.

Advertisement
But, it’s naturally hard to compete with other newspapers with a far more reach and readership and in the era of fancy magazine and the internet, it’s quite easy to leave behind a small Sanskrit daily. 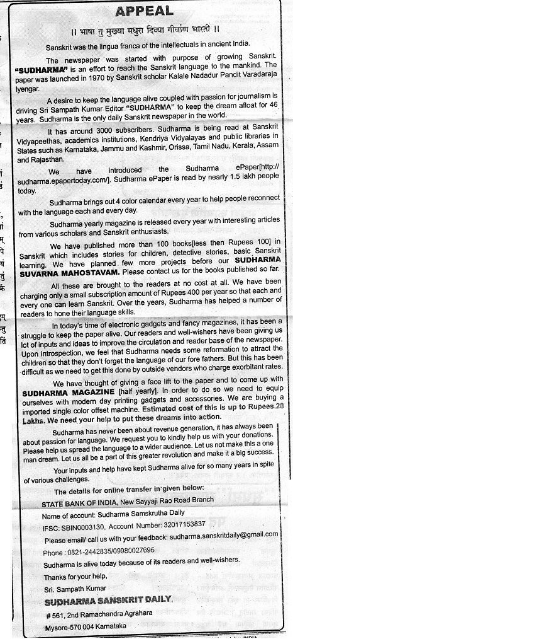 The editor of the newspaper, Sampath Kumar however is not ready to give up. He is still of the belief that the younger generation should try to learn the language of their forefathers. And, he has come upon the realisation that to increase the circulation of Sudharma, a makeover of the daily is of utmost importance.

Apart from wanting to give a face-lift to the newspaper, he has also come up with the idea of a half-yearly Sudharma Magazine.

As is the case always, dreams do come at a cost.

Advertisement
To achieve the above, the newspaper needs to equip itself with modern day printing gadgets and accessories. The idea is to buy an imported single color offset machine. The cost for the same is over Rs 20 lakhs.

And, this is where the newspaper needs your help.

In a moving plea, Kumar has asked for donations to keep the newspaper afloat and to re-think the approach of the newspaper’s circulation through third party vendors (who also charge exorbitant rates)

Kumar ends his plea with this, “Sudharma has never been about revenue generation, it has always been about passion for language. We request you to kindly help us with donations. Please help us spread the language to a wider audience.”

This could be your last chance of keeping not only Sanskit alive but also a few people’s passion and hard work.