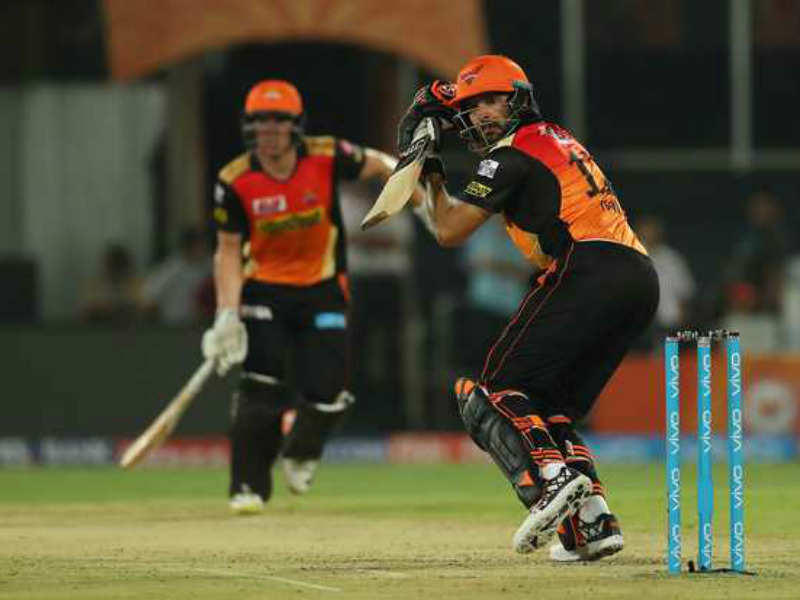 have defeated by 35 runs. It just felt like everything worked just right for Hyderabad.
Advertisement

Opener Shikhar Dhawan (40) and one-down Moises Henriques (52) made up for the early loss of skipper (14) with a 74-run second-wicket stand after being sent in to bat at the Cricket Stadium here.

Advertisement
Veteran Punjab batsman Yuvraj Singh (62), then joined the run feast and together with Australian all-rounder Henriques brought up another 58-run stand for the third wicket to take the hosts past the 150-run mark by the 15th over.

Earlier, Rajasthan left-arm pacer Aniket Choudhary could not have asked for better IPL debut when he induced Warner with some swing to be comfortably caught by Mandeep Singh at backward point. The southpaw's eight-ball knock was laced with two fours and a six.

Thereafter, it was Dhawan and Henriques all the way, taking SRH past 50 in just five overs, as the visitors found it tough to handle the left-right combination.

Dhawan, who has been out of the India selectors' radar for quite a part of the domestic season, unsettled the RCB bowlers with his 31-ball knock comprising five fours, including four from RCB skipper 's first over.

RCB had to wait until the 11th over to get their second wicket when Dhawan failed to clear the long-on boundary off Stuart Binny to be caught by Sachin Baby.

Advertisement
Henriques, on the other hand, started with a flashy four and lost no time to settle down. The Aussie all-rounder helped SRH continue the momentum even after the fall of Dhawan and together with Yuvraj blasted the bowlers all over the park.

Yuvraj, who was dropped on 26 off Choudhary, took full advantage of the life, rushing to his fastest IPL half century in just 23 balls.

The 35-year-old's 27-ball knock, comprising seven boundaries and three massive sixes, provided the much-needed impetus to the defending champions who left from where they left off in the last edition. He, however, fell to England quick Tymal Mills after failing to connect a fast good length delivery in the penultimate over of the innings.

Deepak Hooda and Ben Cutting, then provided the finishing touch with some lusty blows to take the home side past the 200-run mark.