Manmohan Singh on cash ban: ‘In the long run we’re all dead’ 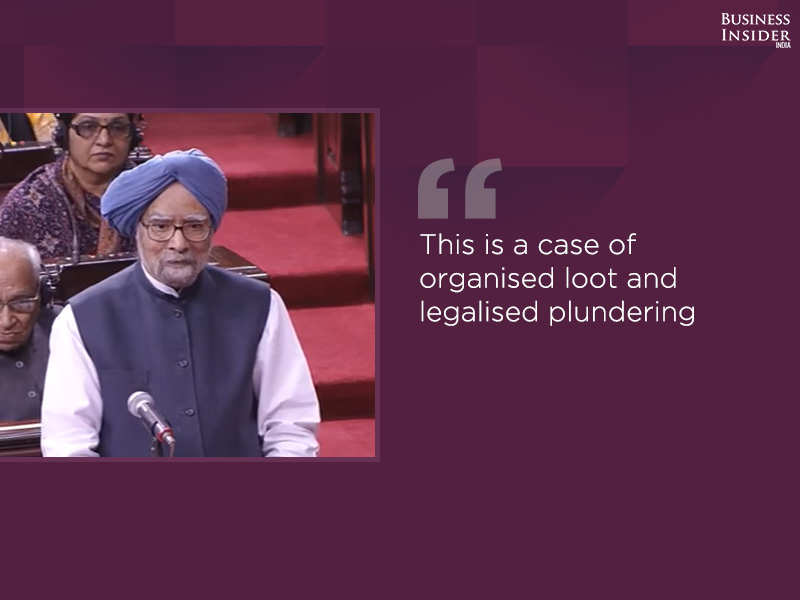 TOP VIDEOS FOR YOU
Addressing the Rajya Sabha, Singh said scrapping of old Rs 500 and Rs 1000 notes could lift people&rsquo;s confidence in the country and the banking system.

Advertisement
Prime Minister Narendra Modi had announced on November 08 and since then, the opposition has been vehemently opposing the move, leading to adjournment motions in both the houses of the parliament.

The opposition has demanded Modi to speak up on the issue in the parliament.

Meanwhile, Singh said, &ldquo;PM said we should wait 50 days. For those who are from the poor & deprived sections, even 50 days torture can bring about disastrous effect.&quot;

Advertisement
Here are the highlights of his speech in Rajya Sabha

- &ldquo;It is important to take note of the grievances of the people suffering and noted that over 60 people might have died in incidents linked to being unable to access their money.&rdquo;

- &quot;This is a case of organised loot and legalised plundering.&quot;

- &quot;Can the Prime Minister name any country where people have deposited money in banks but can't access it?&quot;

- &quot;Even those who say that this measure will cause distress, in the short run, & it will be in the interest of the country in the long run reminds me of John Keynes' words, 'In the long run we are all dead.'&quot;

Advertisement
- &quot;PM said we should wait 50 days. For those who are from the poor & deprived sections, even 50 days torture can bring about disastrous effect.&quot;

- &quot;My feeling is that the GDP can decline by 2 percent points because of this. That, in my opinion, is an underestimate and not an overestimate.&quot;

- &quot;I urge PM to find pragmatic means to ease suffering of our people.&quot;

Next StoryThe curious case of the missing RBI governor
Advertisement
Popular on BI
1
A judo coach fired up his black belt Olympian by violently shaking her and slapping her around the face
2
CDC: The coronavirus could be 'just a few mutations' away from evading vaccines
3
It's not just Zomato — From Happiest Minds to CDSL, some of India's hottest stocks are melting too
Latest Stories
Trending News
Buying Guides
Advertisement
Advertisement
The curious case of the missing RBI governor
Here’s what India’s top market investors think about demonetisation
Trump won because of these 4 words
Popular Categories
Trending Right Now