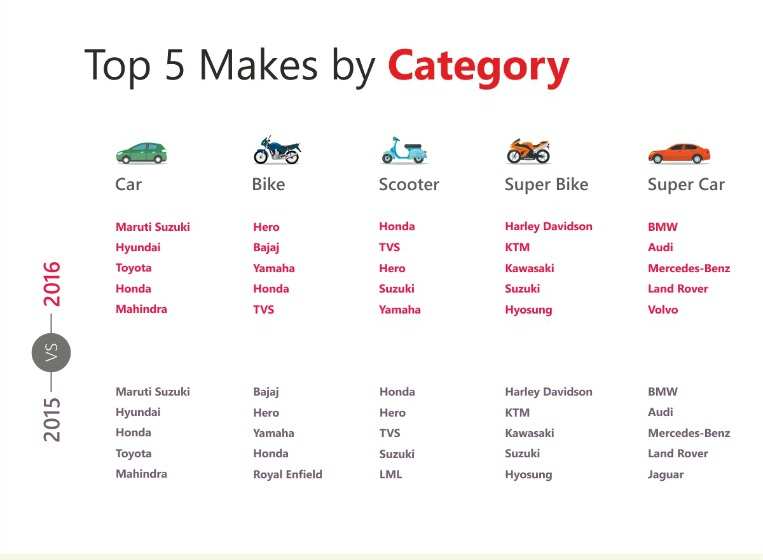 , an online automobile transactional marketplace, recently analyzed its platform database to understand the consumer behavior on its portal. The trends were identified from Droom’s platform data corresponding to the 2015-16 period.

Maruti Swift, one of a complete car from the house of Maruti Suzuki, emerged as the most popular car amongst Droom consumers for the second consecutive year. The model was followed closely by and City. also scored over its competitors in terms of the overall body make.

ALSO READ: Here’s what Ola, Uber have to say as protests by drivers refuse to die down

In the bikes segment, emerged as the most popular vehicle, followed by Hero Passion Pro and Bajaj Discover, while Honda Active staked its claim at the top of the scooter segment, beating the likes of Suzuki Access and Honda Aviator. Another interesting insight that was drawn through Droom’s latest annual consumer survey was the category-wise distribution of sales volume and numbers.

ALSO READ: Check out ONE Co.Work, a co-working space which is changing the way freelancers work
​
Somewhat surprisingly, petrol and CNG cars saw a dip in sales from 59% to 52% and 7% to 4% respectively from 2015 to 2016. Diesel vehicles, on the other hand, reported an increase in sales from 34% to 44%. Hatchbacks also reported a drop in sales from 43% to 40%, while Sedan and SUVs almost remained at par to the previous year’s numbers. MUVs reported a slight increase from 6% to 9%. The average time span of resold used automobiles was 5 years.