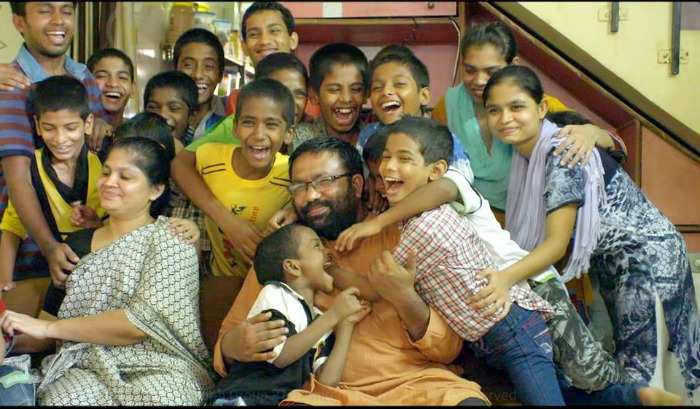 At a time when the discrimination against patients has still not wore down, a Mumbai-based man is quietly transforming the lives of HIV positive children.

, as he is fondly called, is a father to over 24 children, 22 of them are HIV positive children that and his wife have adopted as their own.

Over the years, they have nurtured these kids, fed them even though they had to starve and given them a place of shelter and unconditional love and ensured that these kids have a reason to laugh and live their life to the fullest.

recently interviewed him and gave us a peak into the inspiring tale of this man’s journey to fathering 24 kids and how it began.

Advertisement
If there’s anything you should read today, it’s this.


How it all started:

"I was passing DY Patil hospital one day when I saw a girl sleeping outside -- weak to the point that you could see her bones. I found out that she was HIV positive and had lost both her parents. I asked what she would like to eat and she said noodles, but I couldn't find them anywhere so I promised her I would return the next day. She passed away that night and that incident kept haunting me, so I went inside the hospital and asked them to contact me if there were any such children in the future.


At first, it was difficult to make ends meet:

Advertisement
2 such children were sent to me for different reasons. In 2009, I took a space on rent in Navi Mumbai for my wife, my two children and the two HIV positive children. At first it was difficult to make ends meet -- we could afford one mattress on which my 4 children slept and my wife and I would make do without. Eventually, people started donating -- beds, grains and money. My family of 4 slowly expanded to 24 as more and more children with HIV were sent to me.


‘We have tried to make sure they have a life worth living’:

An incident I'll never forget is of a boy who was abandoned by his parents and brought to us in the last stage of tuberculosis and HIV. We took him in, gave him all the fresh juices and lentils he needed. We began to laugh around him, make him play with us and showered him with so much love that he had to recover! Within two weeks from not being able to get up, he was running around everywhere.


‘I am just a father looking after my children’

That's the most fulfilling part about what I do -- I can proudly say that my family of 24 is overflowing with love! Being HIV positive doesn't mean that they have to cut their life short...they can live as long as any normal person and that's what I'm here for...to save them and give them a long life. And with love and care, everything is possible. These children all call me 'Papa Reji' and it's the duty of a father to protect...so I'm not someone special -- I'm just a father looking after my children."
Advertisement

This man is an example that one doesn’t require endless amounts of money to make a difference- all you need is compassion and lots of love.

Thanks to Papa Reji, these HIV positive kids now have a family and a reason to smile.