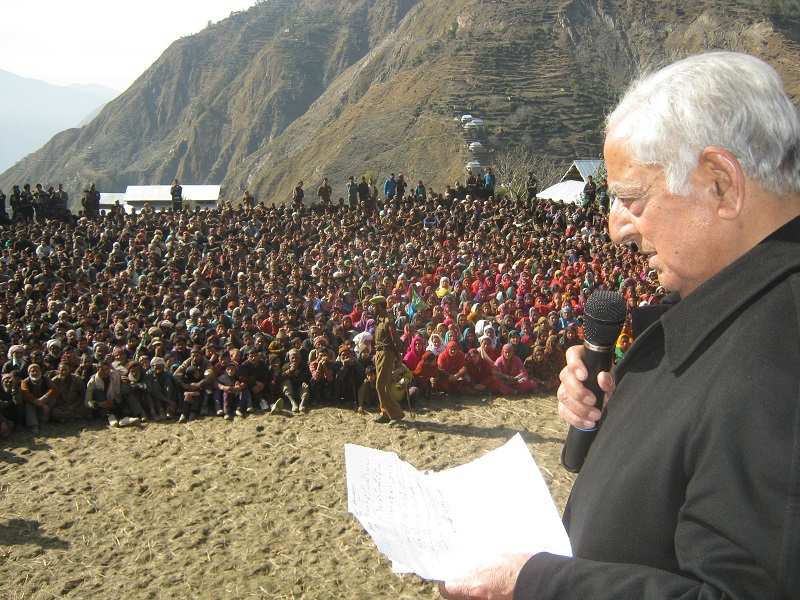 With the news of demise of J&K Chief Minister Mufti Muhammad Sayeed goes a dignified man from this world who lived the life of a true Indian Muslim to say the least. Born to a humble family in south Kashmir’s Bijbehara area of Anantnag district on January 12, 1936, he looked at the conflicted region of Kashmir through the prism of Indian ethos.
Advertisement

Several times, he lifted the tricolor in the Valley knowing that it was life-threatening from him to do so. In a political career spanning nearly six decades, the veteran politician who entered the political field in the 1950s emerged as a rival power centre to the mighty Abdullahs, making friends with parties following conflicting ideologies to suit his political agenda.

Childhood: Born in Baba Mohalla of Bijbehara, Sayeed had his early education at a local school and graduated from SP College, Srinagar. He went on to obtain a law degree and Master's degree in Arab History from Aligarh Muslim University.

Late 1950s: He cut his political teeth early, having joined the Democratic National Conference of GM Sadiq in the late 1950s. Recognising the potential of the young lawyer, Sadiq appointed him as the District Convenor of the party.

Advertisement
1962: Sayeed was elected to the state assembly from Bijbehara, the seat which he retained five years later. He was appointed a Deputy Minister by Sadiq, who by then had become Chief Minister. However, he fell out with the party a few years later and joined the Indian National Congress, a courageous but risky decision at that time given the unstinted support of most Kashmiris to Sheikh Mohammad Abdullah, who was in jail. Considered an astute organiser and administrator, Sayeed ensured that Congress not only got a foothold in the Valley but created pockets of staunch support for the party.

1972: He became a Cabinet Minister and also Congress party's leader in the Legislative Council. He was made the state Congress president a couple of years later. As he rapidly grew in stature, Sayeed saw himself as the next Chief Minister of the state. However, all hopes he might have harboured of occupying the hot seat were dashed when the then Prime Minister entered into an accord with Abdullah and facilitated his return as chief minister after a hiatus of 11 years, much against the wishes of Congress workers in general and Sayeed in particular.

Not the one to give up easily, Sayeed engineered a coup of sorts ahead of the 1977 elections as Congress withdrew support to Abdullah's government. The aim was to have a Congress Chief Minister - which would have been Sayeed - in place for elections to control the official machinery but Governor LK Jha brought the state under Governor's rule. It was the first time that Jammu and Kashmir was brought under Governor's rule. .

1986: As Farooq Abdullah warmed up to in 1986 to ensure his return as Chief Minister ahead of the 1987 assembly elections, Sayeed was shifted to Delhi and appointed as the Union Minister for Tourism and Civil Aviation. Conference and Abdullahs have privately held the wily man from south Kashmir responsible for the intra-party rebellion against and subsequent dismissal of Farooq Abdullah by Governor Jagmohan in 1984. The power tussle between Farooq and his brother-in-law GM Shah led to a permanent estrangement and also saw the latter becoming Chief Minister with Congress support.
Sayeed was a key player when Governor's Rule was imposed for the second time in the state in 1986. Shah's tenure also did not last long as Congress headed by Sayeed withdrew support to his government leading to imposition of Governor's rule for the second time in 1986.
Advertisement

1987: Sayeed meanwhile quit as tourism minister in 1987 and later co-founded Jan Morcha with VP Singh, who had quit Congress over the Bofors scandal.

1989: He won the Lok Sabha election from Muzaffarnagar in Uttar Pradesh as a candidate and became Union Home Minister in VP Singh's cabinet. The high-points in the political journey of Sayeed, who would have turned 80 on January 12, was his being catapulted to the chair of free India's first Muslim Home Minister at a time when militancy broke out in Kashmir and, years later, becoming the Chief Minister of the restive state for a second time in 2015, heading a coalition with BJP, which had its first brush with power in the only Muslim-majority state.

Sayeed's stint in the Home Ministry, at a time when militancy had begun to rear its ugly head in his home state, would, however, be most remembered for the kidnapping of his third daughter Rubaiya by JKLF. The militants demanded freeing five of their comrades in exchange for Rubaiya's freedom and let her off only after their demand had been met. The kidnapping and subsequent release of the militants, according to Sayeed's rivals, projected India as a "soft state" for the first time. He appointed Jagmohan as Governor despite protests by Farooq Abdullah, who resigned and the state came under Governor's rule again in 1990.

1998: Towards the end of PV Narsimha Rao's tenure as Prime Minister, Sayeed returned to Congress fold with daughter Mehbooba Mufti. Sayeed won the Anantnag Lok Sabha seat in 1998 general elections, while Mehbooba became Congress MLA in 1996.
While the state was brought under Governor's Rule in 2002 and 2014 due to Sayeed taking time to thrash out coalition dispensations with Congress and BJP respectively, it was his manoeuvrings that saw a democratically elected government give way to administration by the Raj Bhawan in 2008.

Advertisement
1999: With his dream of becoming Chief Minister of the state still unfulfilled, Sayeed parted ways with Congress and floated a regional outfit - Peoples Democratic Party (PDP) - in 1999. Some of the things associated with the PDP are considered exemplary of Sayeed's political genius.
The green flag and pen-inkpot election symbol of the PDP were lifted straight from the Muslim United Front (MUF) - the Jamaat-e-Islami-led conglomerate of anti-National Conference, anti-Congress parties in 1987 assembly elections.

2002: Though MUF received wide public support in the Valley, it had only four seats to show. Its symbols found ready acceptance in the Valley as PDP made significant gains and won 16 seats in the 2002 assembly elections. Although way short of majority in the 87-member house, Sayeed managed to bargain with Congress and secure a three-year stint as the Chief Minister on rotational basis. Sayeed was sworn in as the ninth chief minister of state on November 2, 2002 - fulfilling a long-standing dream.

2008: The wily politician, who enjoyed good relations across the political spectrum at national level, saw his PDP grow to 21 seats in 2008 Assembly elections but surprisingly decided to sit in the opposition. He withdrew support to coalition government headed by Congress' Ghulam Nabi Azad in July 2008 following widespread protests over the Amarnath land allotment row that pitted the people of Hindu-dominated Jammu region against the Muslim-majority Kashmir Valley.

2014: The youngest party in the state continued to gain in strength as it not only won all the three Lok Sabha seats in the Valley in 2014 general elections but also emerged as the single largest party in the state elections later in the year. Sayeed became the unanimous choice for Chief Minister when PDP and BJP reached an agreement to form a coalition government and took oath on March 1, 2015.

(image credits: JKPDP website)
Advertisement
NewsletterSIMPLY PUT - where we join the dots to inform and inspire you. Sign up for a weekly brief collating many news items into one untangled thought delivered straight to your mailbox.
CAPTCHA: