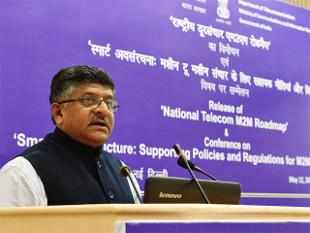 The government is monitoring , which has announced launching the world's cheapest smartphone, and will take action if the company fails to deliver the Rs 251 handset, Telecom Minister said today.

"Our Ministry enquired into how prepared they (Ringing Bells) are, whether they can provide a phone for Rs 251 or not. Whether they have the BIS certificate or not, we have spoken to them," Prasad told reporters here.

He added that this was done to ensure that there are no discrepancies later.
Advertisement

"If there are any, we will take action as per the law. Our department is keeping a watch," he said.

A new entrant in the flourishing Indian mobile handset market, Ringing Bells last week unveiled what is being touted as the world's cheapest smartphone. However, concerns have been raised by the industry on feasibility of a 3G smartphone at such a low price.

Ringing Bells has said the manufacturing cost of the phone is is about Rs 2,500, which will be recovered through a series of measures like economies of scale, innovative marketing, reduction in duties and creating an e-commerce marketplace.
Advertisement

The I-T Department is also looking into the financial structure of the company and has obtained documents, including those from the Registrar of Companies (RoC), in this regard.

They said the price of the device with the said specifications could not be below Rs 3,500 even after a subsidised sale.
Advertisement

There was also a controversy around the Noida-based firm showcasing a rival company Adcom's handset as its own.

Despite the controversies, Ringing Bells managed to receive over 6 crore registrations in two days.