Rise of the Drones and their impact on 21st century warfare 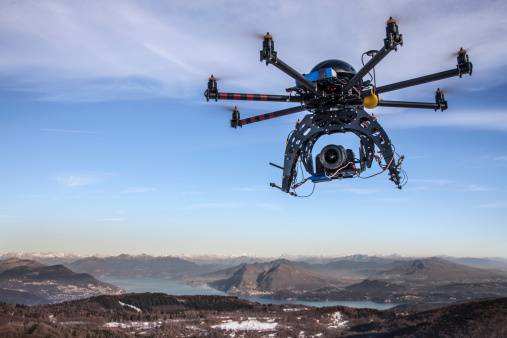 An unmanned aerial vehicle (UAV), commonly known as a drone is an aircraft without a human pilot aboard. Its flight is controlled either autonomously by onboard computers or by the remote control of a pilot on the ground or in another vehicle. The launch and landing process of an unmanned aircraft is by the function of an automatic system or an external operator on the ground.
Advertisement

The concept of came in the mid-1800s, when bomb-filled balloons were used to attack the enemy. The drones that we see today started in the early 1900s and were originally used for target practice to train military personnel. It continued to be developed during World War I and UAV's were used in significant numbers by the Nazi Germany during the course of World War II. United States Air Force started the highly classified UAV program under the code name of "Red Wagon" in the year 1959 to prevent losing pilots over the enemy territory.

UAV's can be classified under these basic categories:

Discover the future of SaaS in India
The 6-part video series will capture the vision of Indian SaaS leaders and highlight the potential for the sector in the decades to come.25th Aug, 2022 Starts at 04:00 PM (40 mins)Register Now
Our Speakers
· Logistics – UAVs specifically designed for cargo and logistics operation
· Research and development – used to further develop UAV technologies to be integrated into field deployed UAV aircraft.
· Civil and Commercial UAVs – UAVs specifically designed for civil and commercial applications.
· Target and decoy – providing ground and aerial gunnery a target that simulates an enemy aircraft or missile.
Advertisement
· Reconnaissance – providing battlefield intelligence.
· Combat (UCAV's) – providing attack capability for high-risk missions.

Modern drones provide capabilities of both guided missiles and manned aircraft. They provide the tactical and operational flexibility of manned platforms with the reduced risk to personnel associated with it. The Predator drone was first introduced in 1995 and is capable of outperforming any human pilot due to its 50-hour endurance and they can operate in a vast range of environments and fulfill many roles such as reconnaissance and intelligence gathering; close air support for ground forces; offensive aerial operations; and hunter-killer operations.

Israel, a country known for its cutting-edge technology and a robust defence manufacturing set-up is also the biggest exporter of unmanned aerial vehicles, which are fast becoming essential to governments worldwide for both military and civilian uses. Some of the Israeli companies that manufacture the drones earned more than $5 billion in sales during the last few years. Israel was recently announced as the world's largest exporter of the small surveillance planes.

Israel doesn’t have strict export curbs unlike others and more than half of those Israeli exports were to Europe, while a third went to Asia-Pacific countries including India and . Israel has supplied around 61% of the world’s drones since 1985, as per the new data from the Stockholm International Peace Research Institute. In second place is the United States, which accounts for 23.9 percent of global drone exports, followed by Canada and France.
Advertisement

With 22.5% of the world’s unmanned aerial vehicle (UAV) imports, between 1985 and 2014, India ranks first among drone-importing nations, followed by United Kingdom and France.

The Indian Army was the first to acquire UAVs, in late 1990s from Israel followed by the Indian Air Force and the Navy. The Indian Armed Forces have been operating UAVs for over a decade. The has acquired the Heron UAVs for its off shore requirements. The and the Indian Air Force has Searcher Mark I, followed by the Searcher Mark II and the Heron.
Efforts has been laid down to develop the indigenous UAV's .India will soon embark on developing an indigenous unmanned combat aerial vehicle (UCAV) for surveillance, detection and destroying specific targets.

DRDO is also developing the AURA (Autonomous Unmanned Research Aircraft) which is an Unmanned Combat Aerial Vehicle for the Indian Air Force with "self-defending high-speed reconnaissance and weapon firing capability". The AURA UCAV will be a tactical stealth aircraft built largely with composites, and capable of delivering laser-guided strike weapons. It would be a stealthy flying-wing concept aircraft with internal weapons and a turbofan engine. The AURA will have on-board sensors for targeting and weapon guidance with flight control system and data link packages.

As per some experts current UAVs are useless in a contested environment unless we provide manned aircraft support to protect them. Some of the UCAV's like Predators and Reapers are tailor-made for counter-terrorism operations and in war zones in which the enemy lacks sufficient firepower to shoot them down, and are unable to withstand anti-aircraft defenses or air-to-air combat.

United States and China has a large pile of UCAV's and China is even considering of raising several squadrons of UCAV's in near future. India’s present stock of UAVs is extremely low and there is a need for greater quantities to meet battlefield requirements for the future. The versatility of the UAVs has been demonstrated in strikes against terrorist camps in Iraq and Afghanistan. One major concern for India is that China has already featured its Chang Hong-3 UCAV platforms in various defence exhibitions in recent years and Pakistan has already started receiving these systems from China.

(RAF) is seriously considering to replace a percentage of its fighter aircraft fleet by UCAVs. The already has plans for deploying the unmanned Northrop Grumman X 47-B Unmanned Combat Air System and this shows us the way the world is heading in terms of UAV's and UCAV's. Development of advanced UCAV's is still in a nascent stage and it is here to stay with some serious indications of being a future force multiplier