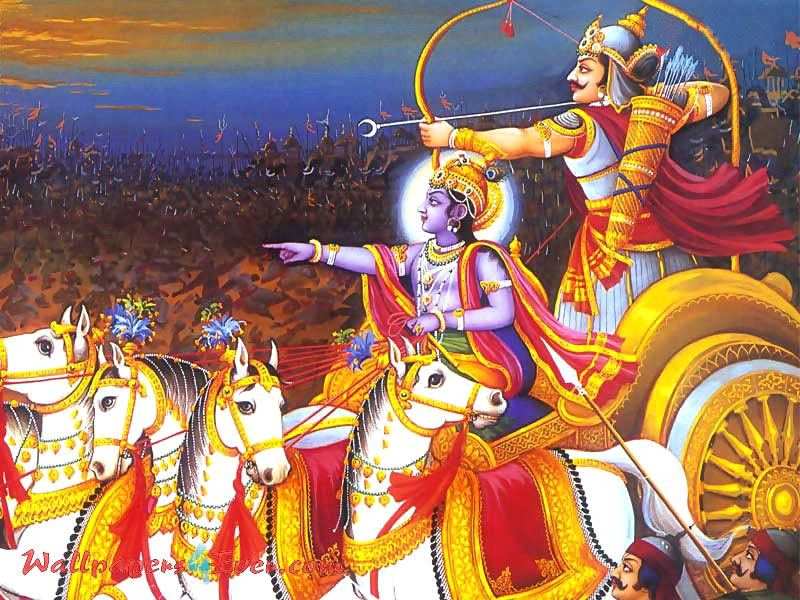 Advertisement
Main stream scientists will hate it, so will the pseudo-intellectuals, but as had once said, “Imagination is more powerful than knowledge”. Since time immemorial, mankind has been experiencing different kinds of warfare in all the dimensions possible. Back in those days waging war was more or less intended to eliminate evil and to establish truth for which highly sophisticated weapons were used only when they needed it the most to avoid any possible large scale demolition and collateral damage. Yes, that was the power and technology they had thousands years back.

is one of the two major epics of ancient India and is written in Sanskrit. It consists of the epic narrative of the Kurukshetra War apart from the devotional and philosophical aspects of the goals of life. The Kurukshetra war had witnessed a lot of ancient weaponry which was far more advanced and futuristic than what we posses today.

The concept of (Missile) and Dhanush (Launchers) emerged from there. Astra was a supernatural hand-carried weapon blessed by a specific deity.

The function of an Astra is more than that of a missile. It is said that Astras used in Mahabharata probably might have also used technologies of emitting most dangerous rays like Gamma and others, which have exceptional powers to penetrate. Some Astras returns to the person who launches it, for instance, Krishna's Sudharsana Chakra. This may be similar to the reusable missiles which the (ISRO) is working on. How could it be possible to manufacture such advanced weapons, thousands of years ago without knowing the complex technology and without having large scale industrial infrastructure? Well, those weapons were guided by some kind of alien GPS system for long range targets and commanded by the Mantras which are similar to today's log-ins and passwords.
Advertisement

Astras were also used for defensive purposes similar to a Tesla Shield which is used to destroy the enemy Astra coming towards it. The modern "Tesla shield" discharges electrical energy and any incoming physical object which hits the shell receives an enormous discharge of that energy and instantly vaporizes. It can also be compared to the anti-missile air defense system of the modern times.

India has a Beyond Visual Range Air to Air Missile (BVRAAM) named Astra. Astra is designed to be capable of engaging targets at varying ranges and altitudes allowing for engagement of both short-range targets (up to 20 km) and long-range targets (up to 80 km) using alternative propulsion modes and the missile is technologically more sophisticated than the nuclear capable Agni missile series of strategic ballistic missiles.

Astras like Brahmashira, Brahmasthra, Pasupatasthra, Vaishnavasthra, Narayana Astra, Agneyasthra, Vayavasthra, Nagasthra, Vajrasthra, Varunasthra etc. were used in Mahabharata along with positive indications of the use of Nuclear weapons, otherwise how could the war cause the death of around 1.5 billion people in a matter of 18 days. The wide degree of devastation found at the site of Mohanjo Daro corresponds exactly to Nagasaki. Davenport, who published his findings in a book named, "Atomic Destruction in 2000 B.C.", in 1979 had said that there was an epicenter about 50 yards wide where everything was crystallized, fused or melted.

Barbarika, a character in Mahabharata, had the ability to mark its targets either to save it or to destroy it with the help of his unique Astras. Now consider this, India's DRDO has a two-stage missile named Nirbhay which has the capability of picking out a target and attacking it among multiple other objects. The missile also has a loitering capability, i.e., it can circumvent a target and perform several maneuvers and then re-engage it.
Advertisement

The Vedas (meaning “knowledge”) comprises of four ancient Indian texts, with the oldest dating back about 1500 BC to 1200 BC. They are also the oldest writings of Hinduism. The four texts of the Vedas include Rigveda, Yajurveda, Sama-Veda, and Atharva-Veda.

The Vedas influenced many from to Bohr and inspired them to explore the new vistas of science and technology and to imagine the unimaginable. Bohr, Heisenberg and Schrödinger regularly read Vedic texts. Heisenberg stated, “Quantum theory will not look ridiculous to people who have read Vedanta.” Vedanta is the conclusion of Vedic thought.

Henry David Thoreau said: "In the morning I bathe my intellect in the stupendous philosophy of the Bhagavad Gita... in comparison with which... our modern world and its literature seems puny and trivial."

Julius Robert Oppenheimer, the principle developer of the atomic bomb, stated that "The Vedas are the greatest privilege of this century." During the explosion of the first atomic bomb, Oppenheimer quoted several Bhagavad-Gita verses from the 11th chapter, such as:
Advertisement

"Death I am, cause of destruction of the worlds..."

It is said that science and religion are not different; it's just that science is too young to understand it. Mahabharata and the Vedas have influenced a generation of the scientists and is still relevant in creating the cutting-edge advanced and futuristic technologies for the mankind including the modern weaponry and warfare.