His remarks came as he visited a military base in Guangdong, according to state-run publication Xinhua. According to Jinping, it is currently necessary to clarify the road map and construction of the ‘14th Five-Year Plan’ for the armed forces keeping the current situation in mind.


He emphasized that the naval branch of the PLA plays an important role in safeguarding China’s national sovereignty, security and territorial integrity — especially when it comes to maritime rights and interests.
Advertisement

The visit comes at a time when China is facing off against India in the Himalayas and growing its aggressive stance in the South China Sea.

India versus China in the South China Sea
Military experts told Business Insider that if the tensions between India and China were to persist, a new front of tensions may appear in the form of exercising the ‘Malacca dilemma.’

Advertisement
The Strait of Malacca is where most of China’s ships pass through from the South China Sea to the Indian Ocean. Exercising control over the passageway could choke China’s energy supplies since that’s where around 80% of its oil trade comes through.

The Indian Navy has reportedly been deploying its own warships in the area after the Galwan Valley clash on June 15.

Following which, a little more than a week ago, a US Navy aircraft carrier — the USS Ronald Reagan — was also spotted heading towards the Indian Ocean through the Strait of Malacca. It’s a Nimitz-class nuclear-powered supercarrier within the US Navy.

Jinping’s visit came following the ’s announcement that it was planning to move forward with the sale of three advanced weapons systems to Taiwan on Monday this week. This includes the High Mobility Artillery Rocket System (HIMARS).

Advertisement
This got a strong reaction from the Chinese Foreign Minister spokesperson Zhao Lijian, who called on Washington to “immediately cancel any arms sales plans to Taiwan” and put an end to all US-Taiwan military ties.

Even though Taiwan has never directly been controlled by the powers that be in China, Beijing still insists that the island-nation is within their territory. It even issued an open letter to the Indian media, asking it to adhere to the ‘One Nation - One China’ narrative, ahead of Taiwan’s National Day celebrations earlier this month.

China has also increased the number of military drills around Taiwan. Nearly 40 Chinese warplanes were spotted crossing the median line in September, after US Health and Human Services Secretary Alex Azar became the highest-level US official to visit Taiwan a month earlier.

Advertisement
The PLA’s Marine Corps has been one of the most crucial areas of Chinese military modernisation, progressing rapidly on both its fronts — surface and subsurface segments of the fleet.

According to the Chinese President, it is necessary to strengthen the strategic design of the Marine Corps construction to meet the needs of the country's development strategy, security strategy, and military strategy.

SEE ALSO:
Chinese Army will be using thermal shelters to fend off the sub-zero temperatures along the India-China border this winter 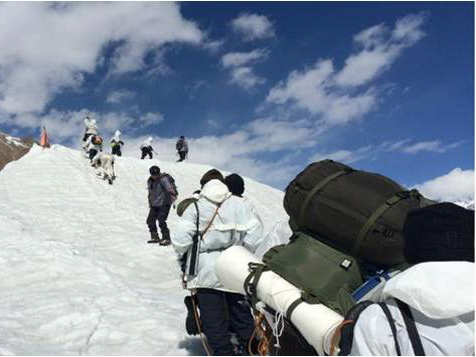