Advertisement
PTI
Apr 29, 2020, 16:20 IST
The spread of COVID-19 in Tamil Nadu is "largely under control" due to the implementation of various government guidelines, but the contagion is "easily"spreading in this city due to its large population, Chief Minister said on Wednesday. Palaniswami, who indicated resuming manufacturing in the Green Zones, also rued people not strictly following social distancing norms and urged the respective district administrations to ensure this principle is adhered to.
Advertisement
Addressing a review meeting on with District Collectors, he also patted the officials for leading the fight against the pandemic and said government's measures in stemming its spread has largely borne fruit due to their efforts.

"Barring Chennai, the spread is largely under control in other districts," he said and credited the collectors for strictly enforcing various guidelines in the fight against the deadly virus.

"Chennai is a big city. More people reside here. Further,many visit the city. Moreover, there are narrow streets where a large population lives and due to this, the virus easily spreads from one person to another. This is the reason for the increased spread of the disease here," he said.
Advertisement
As on Tuesday, the state capital has the highest number of Covid-19 positive cases in the state, 673 out of the 2,058.

Incidentally, of the 121 fresh cases reported on Tuesday, the city had 103 infections.

Palaniswami said that irrespective of an area being acity or rural one, the pandemic can be controlled if the government guidelines were strictly implemented and lauded the Collectors for doing so with the aim of contolling the spread.

The district heads were diligently implementing the government's various measures, including availability of essential commodities, even as the coordinated work of various departments like Health, Police and Revenue, among others, had helped prevent the spread, he said.

However, social distancing was not being strictly followed by the people, especially in ration shops and vegetable markets and the officials should ensure it was duly followed, he said.
Advertisement
Compared to the struggles of many developed nations and super powers, the state was ensuring better delivery of public services, including on the food front, he said.

The flagship Amma Canteens, which are providing free meals to the needy and poor, was proof of this, even asmigrant workers living here, among others, were being taken good care of.

The police should ensure nobody enters or exits a containment zone, he added.

On resuming or starting businesses, Palaniswami said the government would advise Collectors accordingly on allowing such activities in the respective green zones.

Those industries that could be given the green signal include cement, sugar, sago, steel and medical equipment, as allowed by the Centre, the Chief Minister added.
Advertisement
Proper cleaning and maintenance of public toilets, strict implementation of all ongoing lockdown norms and keeping aneye on border districts were the other points stressed by Palaniswami as part of the virus control plan.

Efforts should be to turn the Red zones in the state to Orange, while the latter should become Green and normalcy across the state should be ensured gradually, the Chief Minister told the officials.

According to the government's virus hotspot categorisation, Red Zone denotes over 15 cases or those with a doubling time of less than four days while the Orange means districts with less than 15 infections.

Green Zones are those with no new cases in the last 28days.

As of April 28, is the only GreenZone in Tamil Nadu, of the total 37 districts in the state.
Advertisement
As many as seven are categorised as Orange, while therest, including Chennai, are listed as Red Zone. 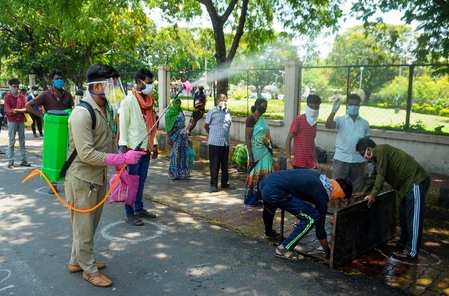