Advertisement
SCMP
Nov 11, 2019, 09:17 IST
Radical protesters played a cat-and-mouse game with police on Sunday as they staged flash-mob “shopping tours”, blocked roads and trashed train stations and mainland-linked shops amid festering anger over the mysterious death of a student.
Advertisement
As calls spread online for demonstrators to go on mall marches, scuffles broke out between protesters and police by mid-afternoon in at least seven districts. Large shopping centres in these neighbourhoods were soon swept up in a frenzy of confrontations and clashes as shoppers tried to dodge the chaos or, in some cases, joined in to hurl abuse at riot police.

While calm returned to most of the districts by early evening, groups of radicals in Mong Kok obstructed traffic with barricades and started throwing bricks and other projectiles at police, leaving the roads studded with concrete blocks. A water cannon was deployed to disperse the crowd there, and about 15 rounds of tear gas were fired in Tsuen Wan throughout the evening as tensions escalated.

Sunday’s mayhem, after Saturday’s peaceful vigil in memory of Hong Kong University of Science and Technology student Chow Tsz-lok, came just two weeks before district council elections, which many fear could be postponed if the violence persists.

At night, protesters gathered outside the car park in Tseung Kwan O where Chow fell and sustained a severe brain injury. They began a stand-off with police, pointing laser beams at the officers.
Advertisement
The violent core first began their antics at Sha Tin railway station in the early afternoon, vandalising turnstiles and smashing glass doors, before moving on to damage a Maxim’s cafe and Maxim’s Palace restaurant, overturning tables and chairs and breaking china.

The station was immediately closed, while elsewhere in Tuen Mun, Tsuen Wan, Kowloon Tong, Tai Po, Tseung Kwan O and Causeway Bay, black-clad protesters appeared for their flash-mob run through the malls. In several places, such as Causeway Bay’s Times Square, they popped up only to find riot police waiting for them. 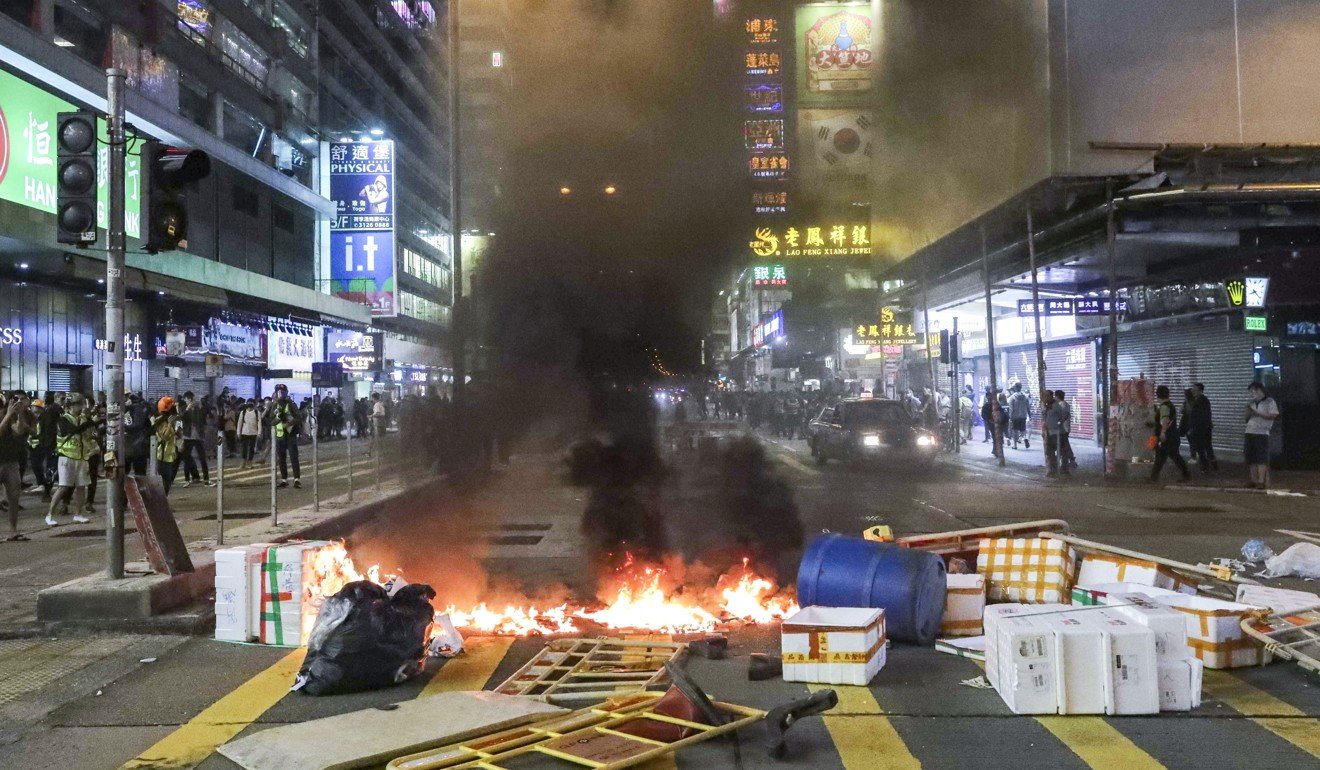 A street in Mong Kok, blocked by protesters’ barricades. Photo: Edmond So

The 24th straight weekend of protests had noticeably smaller numbers of protesters, but bystanders in the malls often cheered them on. In the malls and on the streets, protesters and their supporters repeatedly chanted “rapists” at police, referencing an allegation made in a media report that stunned many over the weekend. A teenager had an abortion after she claimed she was gang-raped inside a police station in Tsuen Wan. Police said their investigations did not match her accusations but that they would continue their inquiries.

The new chant, along with “Take revenge!”, were the key slogans of the day, the latter being a line protesters began using after Chow, a 22-year-old computer science undergraduate, died on Friday. He had fallen four metres in the Tseung Kwan O car park near the site of a police dispersal operation during Monday’s early hours.
Advertisement
The circumstances of his fall remained unclear but many blamed the police. Some have accused officers of pushing him while others said they delayed an ambulance, both charges which the force has denied. Police also said CCTV footage showed he was walking alone around the car park not long before he fell.

A Tuen Mun resident who was out to lend support to the protesters, and gave her name only as Jessie, said the police force needed to be rebuilt at all ranks as she argued an independent probe to look into their actions – one of the protesters’ five demands – was no longer sufficient.

“It would have worked in the early days because I think it was only some police abusing force,” said Jessie, who works in property management and was arrested once in August for unlawful assembly in Tuen Mun.

Emergency services turn on each other at Hong Kong protest

The force was also mired in another controversy on Sunday afternoon when four alleged undercover officers found themselves under attack at Festival Walk in Kowloon Tong, where protesters had already been damaging shops.

As they backed away, one was hit in his right eye. One by one, the four pulled retractable batons from their bags, further fuelling the suspicion that they were deploying force-issued weapons. Two months ago, the force gave all off-duty officers the right to carry such batons.
Advertisement
Later at the same mall, riot police were seen chasing protesters down a moving escalator, pushing aside harried shoppers in their way, while another officer travelling in the opposite direction reached out to grab the demonstrators.

Even though the black-clad protesters were in smaller groups, spread thinly over the districts, the mayhem they caused forced buses to be diverted and traffic to seize up on multiple roads. 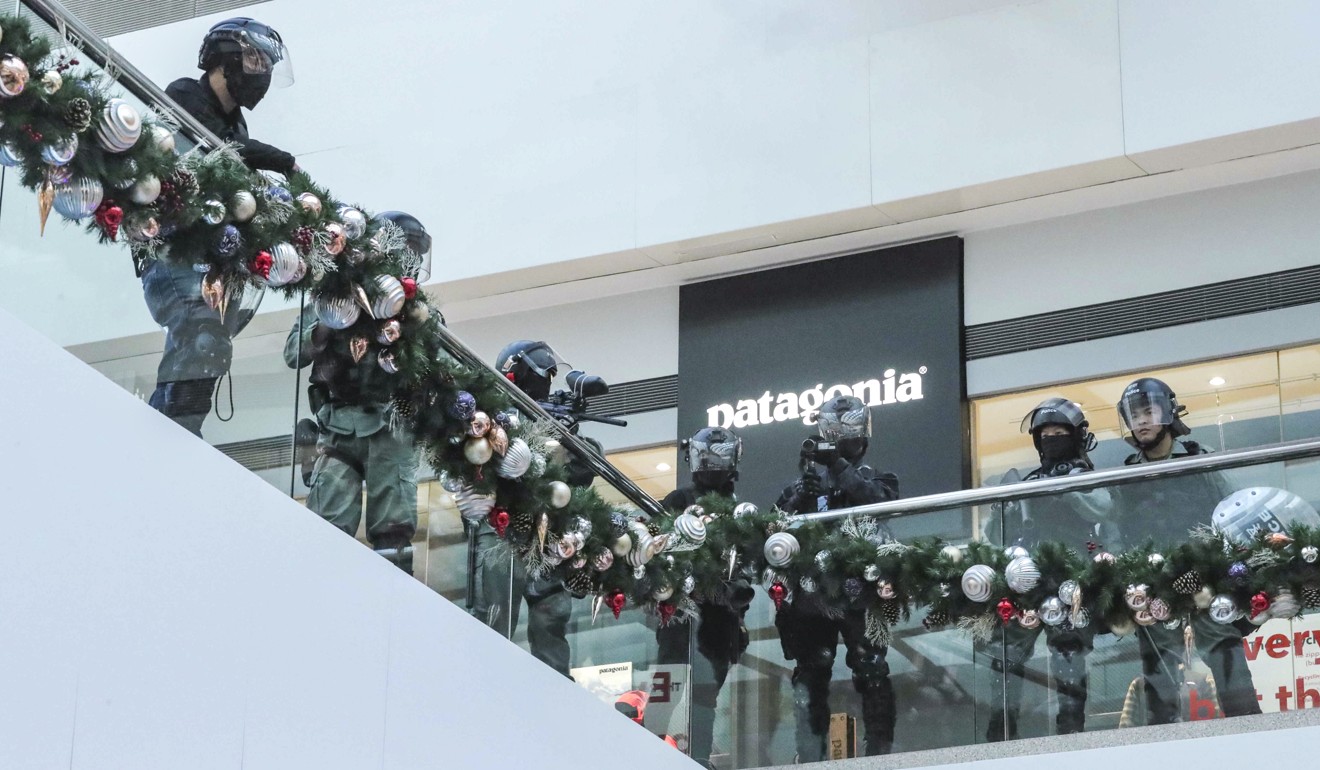 In Tsuen Wan, fewer than 40 of them went into Citywalk shopping centre and began trashing a Starbucks, operated by Maxim’s in Hong Kong, and smashed the cash registers.
Advertisement
The Maxim’s chain has been a regular target for protesters after Annie Wu Suk-ching, the 71-year-old daughter of the company founder, criticised them.

Police also made arrests in the shopping malls, pointing guns with rubber bullets and cans of pepper spray at bystanders. In Tsuen Wan, a small band of elderly men and women, some wearing swimming goggles and wraparound sunglasses, formed a line to protect protesters against the police.

As police fired tear gas in Tsuen Wan, a canister hit the arm of a Now TV reporter, who was sent to hospital for treatment. An officer was seen firing tear gas rounds from the footbridge where she was standing, without warning, from a moving police van leaving the area. 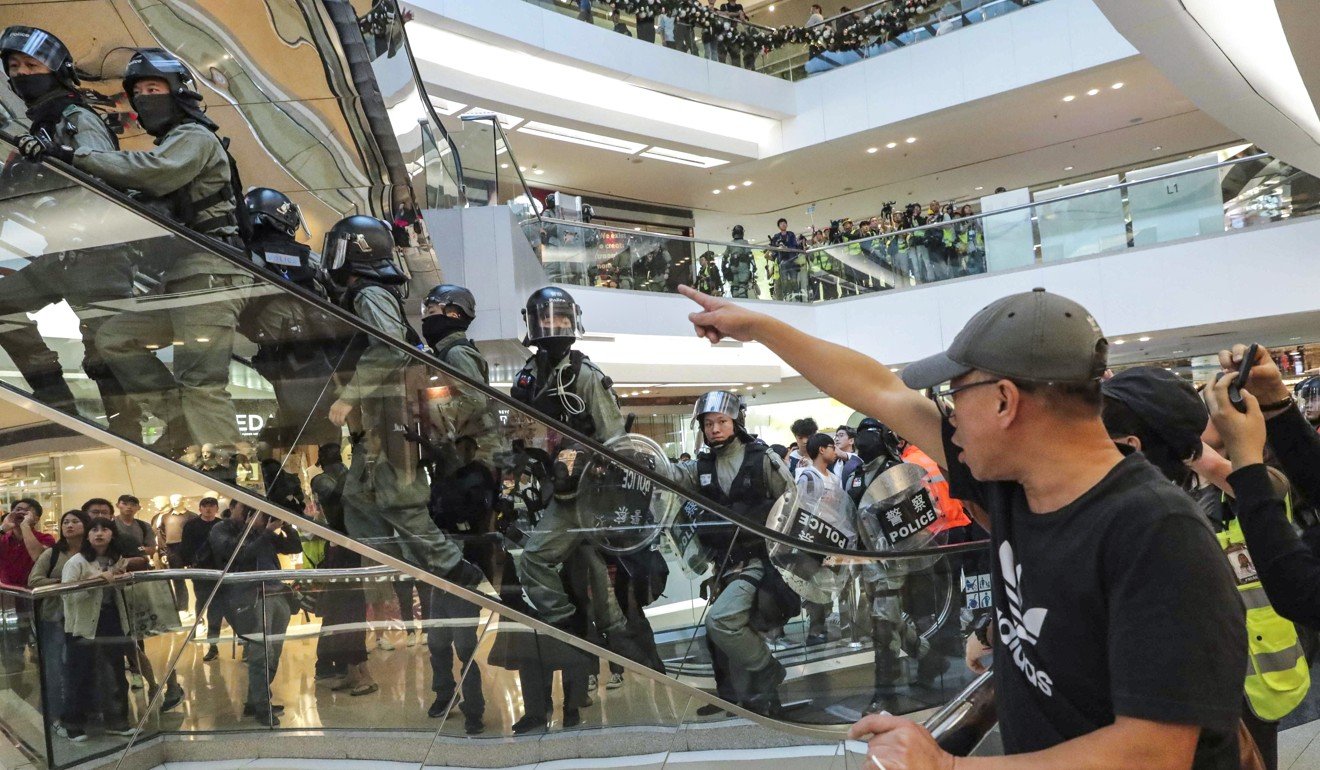 Now TV expressed regret over police’s “negligent” clearance actions.
Advertisement
Despite the chaotic scenes in Kowloon, across the harbour in the evening, about 2,000 mourners showed up at for a prayer meeting to mourn Chow’s death.

Ivan Ho, 26, a materials tester, went to the park alone, saying the past week had been overwhelming for him and he wanted to be a part of the crowd’s moment of silence.

“I get emotional when I read the news; Chow was so young,” he said, demanding a thorough investigation into alleged police violence. 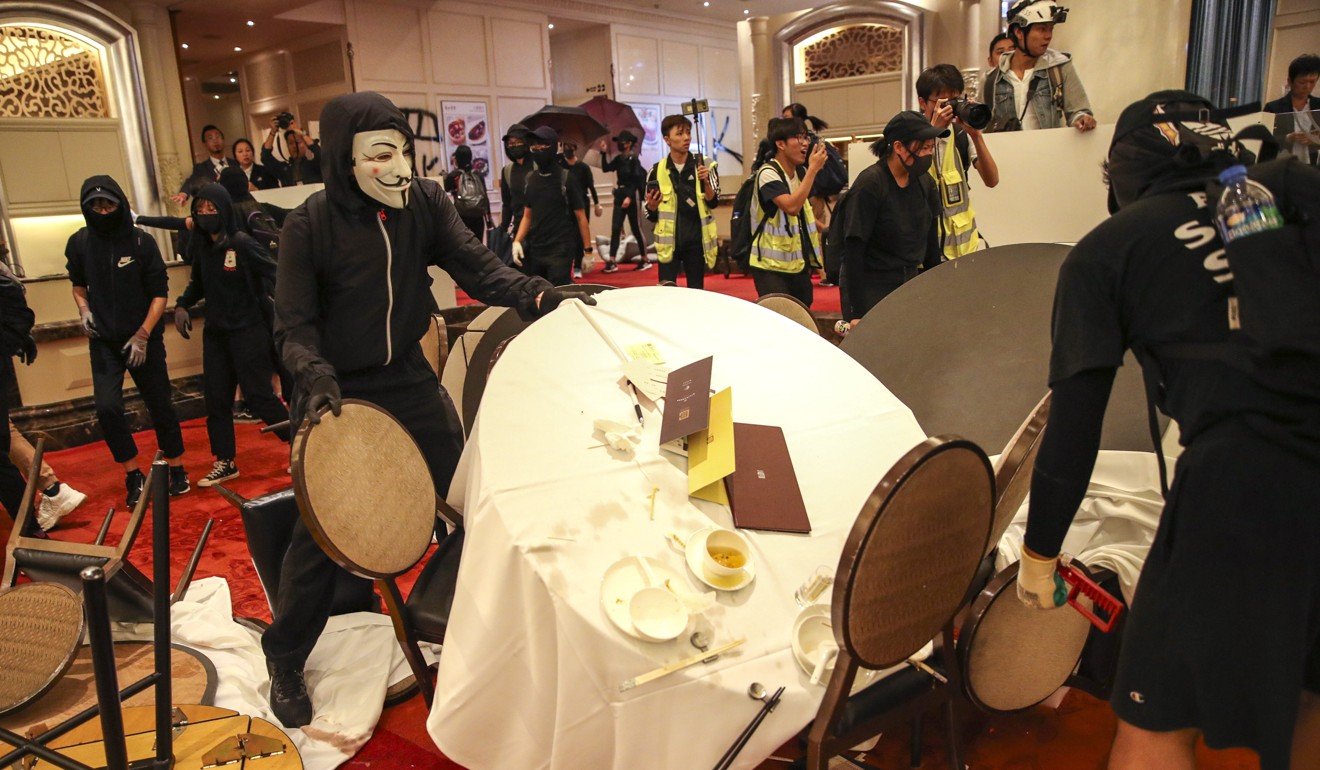 “People like me, in their twenties, are seen as criminals or protesters by police now. You worry simply going out on the street.”
Advertisement
Auxiliary Bishop said after the session that he understood people were emotional, but it was very dangerous to think of revenge.

“We shouldn’t do things that are the opposite of what we want to achieve,” he said. “At this moment we should first seek the truth. Then we should let the judicial system punish whoever was wrong.”

The Hospital Authority said that, as of 11pm, 15 people had been taken to hospital with injuries related to the unrest. Seven were in a stable condition and eight had already been discharged.

“The masked rioters completely disregard law and order as well as other people’s safety and rights. Their acts are outrageous,” he said, adding that the police would “continue to take resolute enforcement action to bring all lawbreakers to justice”.
Advertisement
On Monday, a call for a citywide strike – the third such campaign throughout the movement – could disrupt traffic. It will take place as seven lawmakers are due to appear at Eastern Court to hear charges against them for allegedly interfering in a May 15 Legislative Council meeting.
{{}}
NewsletterSIMPLY PUT - where we join the dots to inform and inspire you. Sign up for a weekly brief collating many news items into one untangled thought delivered straight to your mailbox.
CAPTCHA: