Advertisement
Rounak Jain
Jan 10, 2020, 19:04 IST
Top DealsView all Offers
Furniture
PC & Laptops
Grocery
Large Appliances
Fashion
TV
Amazon Devices
Chinese smartphone major Xiaomi has been around for more than five years in India. On its way to market leadership in the country, Xiaomi has adopted an aggressive strategy with respect to prices and product launches.
Now, another Chinese company, Realme is chasing Xiaomi, and chasing hard. The competition between Xiaomi and Realme has already gone beyond smartphones. Realme recently announced its financial credit service called Payसा that will compete with Xiaomi’s Mi Credit. Realme is also planning to launch a fitness band and Smart TVs later this year to take on Xiaomi in these categories. 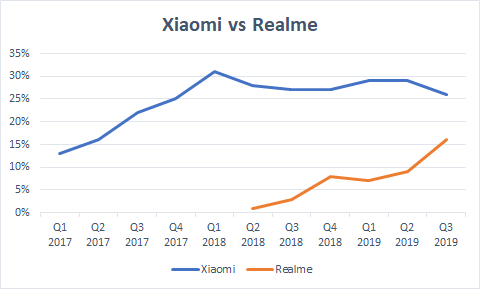 Xiaomi debuted in India back in 2014 and changed the Indian smartphone industry forever. At a time when Indian buyers were wary of buying smartphones online, Xiaomi chose to go the online-only model.

Its first launch, the Mi 3, proved to be a massive success. The company sold the smartphone in weekly flash sales, and quite often, it ran out of stock within seconds of the start of the sales. [hyperlink to any one story preferably from a third or fourth sale which has reference to prev sellouts]
Advertisement

Xiaomi has consistently increased its market share since its debut. In late 2017, Xiaomi finally beat Samsung to become the market leader with a share of 25%, while Samsung came in second at 23%.

According to data reported by Counterpoint Research, Xiaomi has seemingly peaked at a market share of 31%.

Advertisement
Realme debuted in India in May 2018 with an entry-level smartphone called the Realme 1. Realme has since launched several smartphones that compete with Xiaomi’s offerings both in terms of the features as well as pricing.

Realme’s strategy of competing with Xiaomi on both features as well as price has paid handsome dividends – Realme has gained 16% market share in by September 2019 in just two years of its presence in India.

Advertisement
At the same time, Xiaomi’s market share in the same period fell from 31% to 26%.

The competition went beyond products. Realme’s quick rise in the Indian smartphone industry also led to a war of words between the heads of Realme and Xiaomi. It did not help that Realme’s messaging took on Xiaomi directly.

Recently a brand has started talking about Qualcomm SD 710. Here's the thruth: it's a one year old processor! We l… https://t.co/ZvJlz8lH3s


Modem speed is extremely important Vs #specsonpaper In Today's time when your life is on fast lane and hence Rm a… https://t.co/OdALYOz0v0

While Xiaomi has built a wide portfolio of products in India over the course of the last few years, Realme’s primary products remain smartphones and accessories. That seems to be changing now.

Realme CEO Madhav Sheth teased the company’s first fitness band at the launch of its latest budget smartphone. Expected to launch in the first half of 2020, the Realme fitness band could be priced aggressively to compete with Xiaomi’s Mi Band range.
Advertisement

Realme has also announced its arrival in the financial services space with the launch of Payसा. With this, it takes on Xiaomi’s Mi Credit service. Realme hopes to acquire 25 million Payसा users in the next two years.

Both Xiaomi and Realme have plans to launch Internet of Things (IoT) products in India in 2020.
Advertisement

Realme TVs are also on the way

Realme CMO Xu Qi Chase has also confirmed that the company will launch its TV portfolio in 2020. Going by Realme’s history so far, the first Realme TVs could compete with Xiaomi’s Mi TV models in most aspects.

The launch of Realme TVs in India might not change the landscape much, though. Xiaomi’s Mi TV portfolio is spread across different price segments, starting at ₹12,499 and going all the way up to ₹47,999. This gives both Xiaomi and Realme enough room to exist simultaneously, unlike the budget smartphone segment which has cutthroat competition.

Advertisement
For the premium TV buyers, though, Smart TVs from Xiaomi and Realme may not even matter even though they offer plenty of features at a fraction of the price.

For one, the display quality and viewing experience on TVs from Sony, LG, Samsung and even OnePlus is far superior. Apart from this, most TV buyers seem to be preferring Fire TV sticks which are flexible and cheaper to replace or upgrade if necessary.

Xiaomi and Realme gear up to launch IoT products in India in 2020
Advertisement
{{}}
NewsletterSIMPLY PUT - where we join the dots to inform and inspire you. Sign up for a weekly brief collating many news items into one untangled thought delivered straight to your mailbox.
CAPTCHA: