With three big state elections coming up in the next couple of years, the incumbent government in West Bengal under Trinamool Congress led by Chief Minister Mamata Banerjee, and those challenging BJP-supported governments in Bihar and Tamil Nadu, have lessons to take from Kejriwal's strategy ,as well as foes and potential friends actor-turning-politician Rajinikanth.


Advertisement
In Bihar, where elections are due this year, the ruling government under Chief Minister Nitish Kumar is a coalition between the BJP and the Janata Dal (United), and it will face-off with the alliance between Rashtriya Janata Dal, led by Lalu Prasad Yadav, and the Congress.

This victory for AAP not only gives Kejriwal a second full term as Chief Minister of the Union Territory but also offers lessons for political parties across the country.
Advertisement
First, it reinforces the fact that most people in India, and particularly in Delhi, vote differently for state Assembly and Parliament elections.

Just about eight months ago, the same people of Delhi voted overwhelmingly for Prime Minister Narendra Modi's party and AAP could not get a single seat in the Lok Sabha, the lower house of Indian Parliament. The comfort of those numbers may have played a role in BJP's strategy in the Delhi election. The saffron party was raking up national issues⁠— like illegal immigrants from neighbouring countries⁠— consistently but as the numbers show, it didn't yield the desired result.


For example, BJP’s Anil Kumar Bajpai has won the Gandhi Nagar constituency by a comfortable margin of over 5,000 votes. He won in 2015 too, but on behalf of AAP. Clearly, his aura at the local level clearly has more pull than the party he represents.
Advertisement
Second, it is not a victory for those protesting against the Citizenship Amendment Act and the National Register of Citizens.

While finding faults with the BJP's strategy, it may be wrong to infer that the Delhi election verdict is in favour of those protesting against the Citizenship Amendment Act (CAA) and the related National Register of Citizens (NRC), which, together, are feared as tools of discrimination against India's Muslims.


If the vote has been cast on local issues, it would be wrong to draw inferences on national issues. There is enough anecdotal evidence that, there is still a lack of clarity among the masses on the intent and the potential impact of the CAA and the NRC.
Advertisement
And it is very likely that BJP⁠— with its resources and its hold over mass media⁠— will be able to sway public opinion in favour of the CAA and NRC; it would be a relatively easy task in a country where majority are Hindus, and there is rising public assertion of the identity against other minorities.


Third, 'hate speeches' is not a cheat code that always garners more votes.

Even while infering BJP still has enough currency to legitimise its move to bring the CAA, and follow it up with the NRC if it wants to, it has to be underscored that the persistent hate speeches against minorities, particularly the Muslims, are causing more fatigue than frenzy.
Advertisement
If the caustic rhetoric against Muslims were a vote gatherer, BJP would have had more seats as one of its Members of Parliament, Parvesh Verma, repeatedly spewed venom that had potential to cause incurable damage. BJP lost all ten state-level constituencies that come under the same Parliamentary segment that Verma represents in the Lok Sabha.


Not just Verma, the regular rabble rousers of the BJP like Tajinder Pal Singh Bagga (Twitter troll-turned-politician) and Kapil Mishra (who defected from AAP to join the BJP) also faced a resounding loss. Verbal violence makes for big headlines but not big results, not always.

RT if you will Boycott Movies of @deepikapadukone for her Support to #TukdeTukdeGang and Afzal Gang https://t.co/LN5rpwjDmT

Advertisement
Fourth, Both BJP and Congress have relatively less traction in local elections.

With this election, BJP has been kept out of power in the Delhi assembly for 22 straight years with five more to go before the next scheduled election. In the same time, there have been three BJP-led governments at the Central level including the 'Modi waves', that is into its second straight term. The last BJP Chief Minister in Delhi Assembly was the late Sahib Singh Verma, Parvesh Verma's father, between 1996 and 1998.

Even though the BJP failed to make a meaningful impact in the 2020 Delhi election, it at least has a rise in vote share to show.

Congress, on the other hand, is down to a little over 4% vote share in the national capital. Data from the last nine elections in Delhi, including those for the Parliament, the Assembly, as well as the civic body, has shown that the grand old party can be on the winning side but not the winner anymore.
Advertisement

Fifth, regional parties can beat the BJP if they don't fall for its traps.

One of the most politically astute things that Kejriwal did was to avoid the many traps laid by the BJP leaders many of whom are identified by the Hindu majoritarian, as opposed to a secular, ideology. Those opposing the party will find it difficult to outdo the BJP in a similar rhetoric.

While the assertion of the Hindu identity in politics has more resonance in 2020 than ever before, aping the BJP by appeasing the Hindu fundamentalists may not serve the entire purpose for its opponents. The voter may well go for the 'original' than the 'clone'.
Advertisement
Also Read 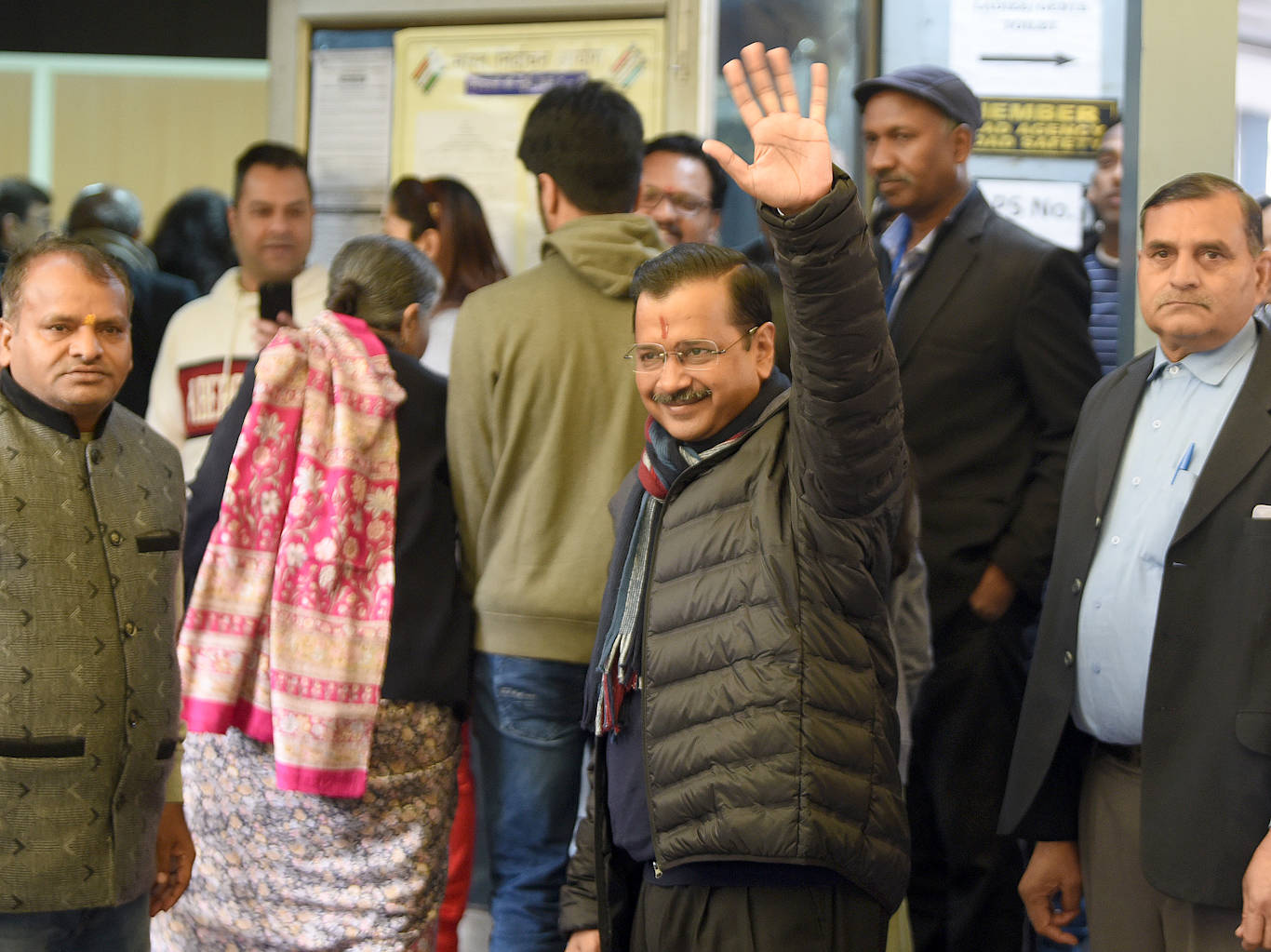 Election strategy: AAP may win in Delhi by not falling for BJP’s traps


Kejriwal's deft management of the Hindu fundamentalist sentiments, those who care more for the importance given to the religious identity over governance, policies, and performance, will be a good strategy to follow for the likes of Mamata Banerjee when she faces off with the likes of BJP's Dilip Ghosh known for his violent, anti-Muslim rhetoric.


Finally, the lesson for BJP cadres
Advertisement
While Bengal has shown a penchant for violence, time and again, BJP's pro-Hindu image and rabble-rousing strategy is likely to have little resonance in places like Bihar and Tamil Nadu where local issues, nuances, and leaders are more prominent and the vote bank is divided between multiple parties.

So, just like in Delhi, emotive national issues for the assembly election in Bihar and Tamil Nadu may be useless.

In Bihar for instance, both the RJD and the BJP have similar voter shares— it changes from one election to another but moves in a range— and whoever Nitish Kumar's JD(U) sides with gets to form the government. As of now, the existing alliance is an advantage for BJP but Nitish Kumar is known to be agile in making new friends and dumping old ones.
Advertisement

Whereas in Tamil Nadu, it has been a political duopoly between the DMK and the AIADMK, and their respective allies, for decades. However, a third force, an iconic actor Rajinikanth, is waiting to throw in his hat into the ring. A fourth influencer at best, another icon from the film industry, Kamal Haasan, who made his political debut in 2018, hasn't had any impact on the seats or vote share yet.

Rajinikanth has more in common with the BJP than with the other Tamil parties. But his approach, at least so far, has been to gently stroke the BJP supporters with his words, keeping them on his side, while not committing to the party or the ideology, even as a partially-discordant ally. His new party is expected to launch anytime soon and that may alter the field substantially.


Advertisement
So, the BJP's strategy has to be crafted on local issues with local leaders who have some pull among the voters.

After the drubbing in the Delhi election, the state unit chief Manoj Tiwari (another sensation from a regional film industry) had to take the blame. It is another matter that had BJP won, or even scored a respectable tally, the credit would have gone to party's most-famous election strategist, and the country's Home Minister, Amit Shah. This is not good for the morale of the party cadre especially in states where BJP is a non-starter.

This is also a point that BJP's potential allies like Rajinikanth will have in mind before they decide on taking sides.
Advertisement
SEE ALSO:
"I love you", Arvind Kejriwal's first words in his first speech after winning a second full term as Delhi Chief Minister

Atishi, the Oxford graduate turned politician, is leading the education reform in Delhi

Election strategy: AAP may win in Delhi by not falling for BJP’s traps