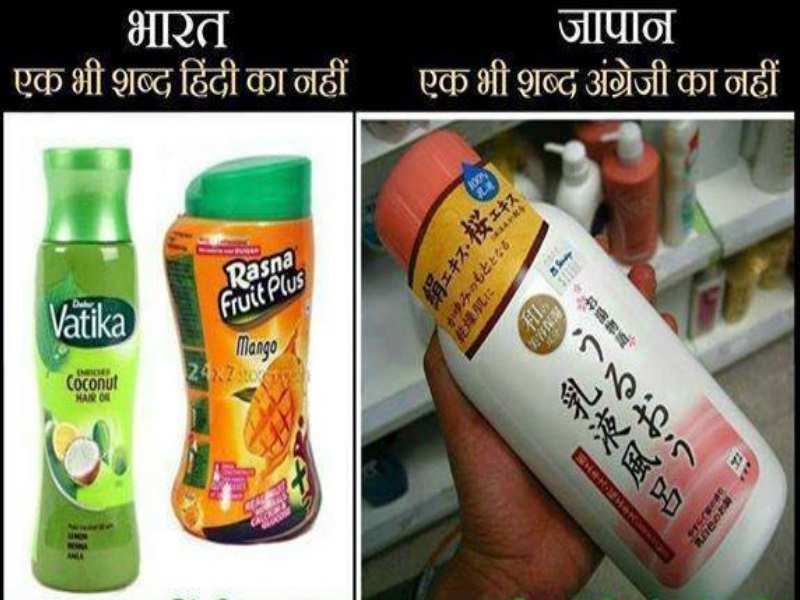 Last few days saw much hue and cry, mainly by politicians from down south led by chief Karunanidhi, over the Union ’s directive to bureaucrats to use on social media platforms. But was such a strong reaction to a normal advisory justified?

With Prime Minister assuming office, Hindi has found the place it deserves in the corridors of power. After his swearing-in ceremony, Narendra Modi spoke to foreign dignitaries in Hindi. Even on his trip to Bhutan, his first official foreign visit, he addressed the Bhutanese Parliament in Hindi.

Before Modi, former prime minister , a great orator and accomplished poet, always used Hindi as his vehicle of communication. In 1977, Vajpayee addressed the annual assembly of the in Hindi and became the first Indian leader to address the UN in Hindi. But unlike Modi, he did not mind switching to when addressing joint press conferences with his foreign contemporaries like Tony Blair, Bill Clinton and George Bush.
Advertisement

However, after the statesman unexpectedly lost the elections in 2004, Hindi, too, started losing its place of privilege in the corridors of power and was totally marginalised during the decade-long rule of former prime minister Manmohan Singh. Although many international leaders of developed countries like China, Germany, Italy, France, Japan and Russia speak in their respective national languages even on foreign visits, Indian leaders have always taken pride in using English even in the Parliament. This was evident during the regime.

Now, let’s come back to the present controversy over the use of Hindi. It all started with the Home Ministry issuing a directive to bureaucrats to use Hindi to convey message through social media. It’s pertinent to mention here that the directive was only meant for ‘social media messages’ and not for the official communications sent from the Centre to the states, which continue to be in the two official languages - Hindi and English.

Social media messages are meant for the general public. According to the 2001 census, Hindi is the mother tongue of more than 41% of the country’s population. Add to that 5% and 1% speakers, which takes the percentage of people proficient enough in Hindi to more than 47%. Hindi is also used as a link language in states like West Bengal, Maharashtra, Gujarat, Odisha, Punjab and Goa – the states where Hindi is not spoken as the first language. Moreover, Hindi is also understood in many parts of southern states like Andhra Pradesh and Karnataka and even north-eastern states like Assam, Meghalaya and Arunachal Pradesh. So what is wrong in asking bureaucrats to use Hindi on social media? Which other language can fulfil the purpose of reaching out to such a large population base?
Advertisement

But the anti-Hindi crusaders of Tamil Nadu lost no time in raking up a controversy out of a non-issue. M Karunanidhi, chief of Tamil Nadu-based DMK party went on to say, "No one can deny it's beginning to impose Hindi against one's wish. This would be seen as an attempt to treat non-Hindi speakers as second class citizens." Where is the question of treating non-Hindi speakers as second citizens?

Barring Tamil Nadu, no other state has raised any objection to this direction. In fact, it is heartening that this time, the push for Hindi comes when the government is headed by someone whose native language is not Hindi (Narendra Modi’s mother tongue is ).

Union Minister of State for Home , who belongs to the north-eastern state of Arunachal Pradesh, also voiced his support for Hindi. “Hindi is our , we have to promote Hindi," he said following the controversy.
Advertisement

Noted poet Ashok Chakradhar also welcomed the move, saying “If this government is getting bureaucrats to use Hindi, it is a great idea. Hindi is understood by 80% of Indians who pick it up from popular films, songs and the media. But at the official level, no one is fighting for the language.”

Tamil Nadu’s opposition to Hindi dates back to the 1960s. In 1950, the Constitution declared Hindi as the official language and English was to be used as secondary official language till 1965 to facilitate a smooth transition. But the DMK launched an anti-Hindi campaign in Tamil Nadu, during which, Hindi books and effigies of ‘Hindi demoness’ were burnt on village bonfires. Does it not reflect deep-seated anti-Hindi bias?

The campaign soon turned into full scale riots, which led to the killing of 70 people, including two policemen. However, the riots catapulted the DMK to power in 1967 elections in the state as opposition to Hindi was a dominant election issue.
Advertisement

Following large scale violence in Tamil Nadu, the Centre enacted the Official Language Act, 1963. The Act stated, “Notwithstanding the expiration of the period of 15 years from the commencement of the Constitution, the English language may, as from the appointed day, continue to be used in addition to Hindi.”

One wonders why some Tamilians hate Hindi so much. In Gujarat, students are taught English, Gujarati and Hindi in schools. They never get offended or complained about imposition of Hindi. Hindi is the most widely spoken language in the country and it should be promoted to facilitate easier communication throughout the country. But at the same time, the importance of regional languages should also not be undermined.