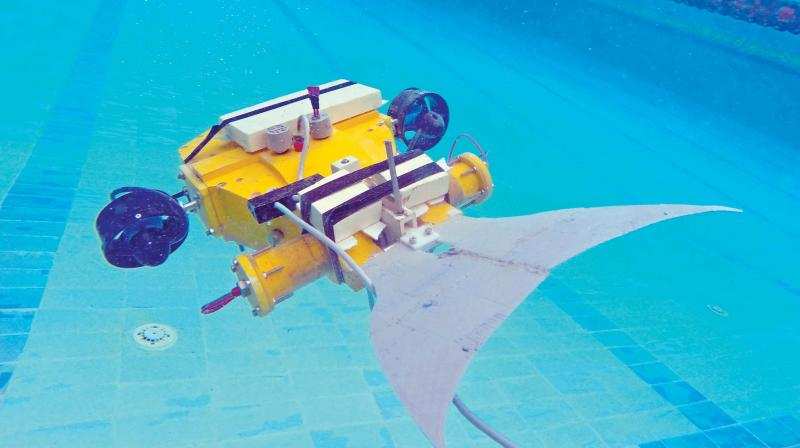 A masterpiece by an student has left the top defense research body in the country DRDO completely in awe of him.

Master of Science student Santhosh Ravichandran recently created a first-of-its-kind turtle shaped under-water robot named in just three months’ time. His version of model has bio-inspired propeller which is similar to the fins of a dolphin. Its unique features include unique hydrodynamics, energy efficiency, and ability to camouflage, and is therefore a better alternative for military applications.

ALSO READ: These Innovations by IITians Prove India Has Got Some of The Most Brilliant Minds

Advertisement
Officials of the DRDO are in talks with the student as well the faculty of IIT Madras, and it wants to test the robot by installing its own sensors on it. Through this the DRDO wants to ascertain whether the robot is ready for military purpose or needs fine tuning.

Duli can do visual inspection even in the undercurrent of the ocean, claims Santhosh, besides surveying coral reefs without damaging the marine eco-system as it uses a rapid long motion to move.

Advertisement
It gathered much praise when a prototype was exhibited earlier this year at Underwater Interventions expo in United States, where even the was a participant.

Even as the product is still at a preliminary stage and needs practical testing as per Project Head and Associate Professor Mr Prabhu Rajagopal, all the basic requirements are covered.

An autonomous version is expected to be ready in a few months, and there’s little doubt this spectacular masterpiece will soon be deployed under water and helping our military personnel.