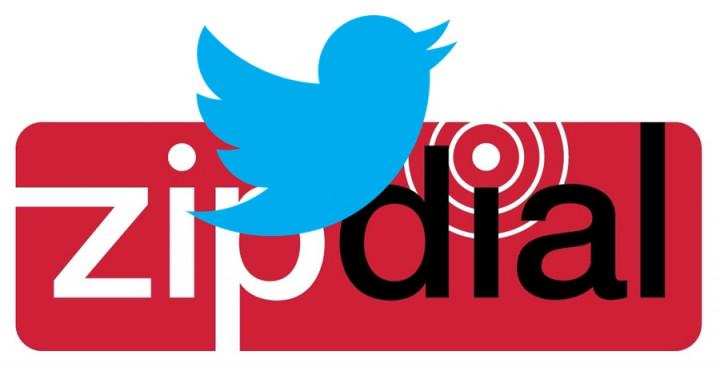 This must be tech-world’s own Make in India version. acquiring has been a point of discussion in the boardrooms ever since the company announced its India plans.

Little over a year ago, Twitter – the microblogging site – was not too gung-ho about the Indian shores. But since the general elections last year, when India held the imagination of young people and Indians world over, social media platforms are suddenly the game changers.
This is one acquisition that has left some part of the technology world stumped. Why would Twitter acquire Bangalore-based ZipDial, an almost non-entity which worked on ‘Missed calls’ to provide text-information to customers who wanted to know about offers made by ecommerce players?

ZipDial was identified as India’s most exciting companies that Twitter wanted have in its kitty. Though the actual details of the acquisition are yet to be revealed, rumour mills are agog with figures that went behind the deal. According to a few sources within the tech sector, this acquisition may have come at a handsome $ 30-40 million for this startup.
Advertisement

The company was founded five years ago to meet some part of demands that Indian market posed. This was truly something that was specific to India, an experiment of sorts that was acknowledged by the west. Because understanding this acquisition isn’t easy and it may well take a long time for US companies to really understand what this means.

US companies are yet to come to terms with the required wherewithal to understand the advanced and culture-specific marketing tools to reach a huge base of user population. As the signs are getting clear now, emerging markets such as India will be the countries that will allow ecommerce to grow within their precincts. In times to come, as highly populated third world countries hold the reigns of ecommerce and sit in a decisive position to drive its direction, US companies will probably have to come around to tweak their strategies and propositions in order to gain some hold on these markets. Global commerce will be the driving force of the future, and emerging markets -- the leaders.

When this happens, companies and marketing agencies cannot afford to lag behind and miss the most important lessons that are being learnt along the way.
Advertisement

Expert on emerging markets and businesses, who is also the Principal of SH International LLC, says such acquisitions will impact US companies owing to the fact that they will seek to profit from advanced marketing technologies to the emerging markets consumer. This will happen at a more advanced level, because they will want to consider how they can shape US consumer behaviour into also being receptive to similar marketing technologies given their cost advantages.

And, even the companies who have worked on their architecture are very excited about the opportunities that lie ahead in a country where cyber space and mobile Internet are fast penetrating into the psyche of Indian minds, to turn the course of things that lie ahead.

Twitter isn’t just the language of the youth in India. It is the language that politicians speak, tweet, and people respond to various issues. The big moment for Twitter in India was when the turned successful. While the country was delighted at the achievement, the Mars Orbiter exchanged a small greeting ‘Howdy?’ with Nasa’s Mars Curiosity that had landed on the Red Planet in 2012. MoM (Mars orbiter Mission) told Curiosity that it ‘would be around’ just in case. Then the historic moment happened. This was called an interstellar hit, and retweeted over 12,500 times. The fact that two robots could talk to each other in space was something that opened the minds of millions of people who kept wondering where the tech-laden world would end up.
Advertisement

Though this isn’t Twitter’s sole achievement yet, it has been a very significant moment for both ISRO and Twitter to have made this possible. ISRO was one of the agencies who realized the potential of Twitter, and in more ways than one, made Twitter realize its own potential and how far it could go on this journey.

Twitter has always sounded excited about the Indian opportunity that can bring it closer to a billion people who hold the market potential. The sheer size of the market and its possibilities excite the technology companies with challenges and learnings that will possibly happen through this platform. Online marketing is an exciting opportunity that India is opening up to and has the potential to turn into a leader in the area.

Twitter is now on a mission to reach each and every citizen of India, taking in whatever is needed to get there. ZipDial is Twitter’s first acquisition in India, and there will be many more along the way. The Bangalore-based mobile marketing and analytical start-up has surely held some torch into Twitter’s plans for the country.
Advertisement
NewsletterSIMPLY PUT - where we join the dots to inform and inspire you. Sign up for a weekly brief collating many news items into one untangled thought delivered straight to your mailbox.
CAPTCHA: